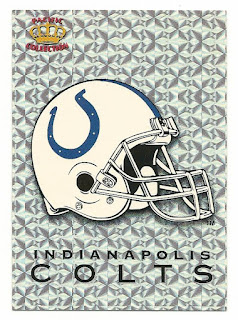 Indianapolis is home to two pro sports teams - the Colts and the Pacers. It is also home to my writing idol John Green..

..which (mostly) explains why he name-checks Pacers great Rik Smits in his best-selling book The Fault In Our Stars.

I have a few Rik Smits cards in my binder..and a few Detlef Schrempf cards.. 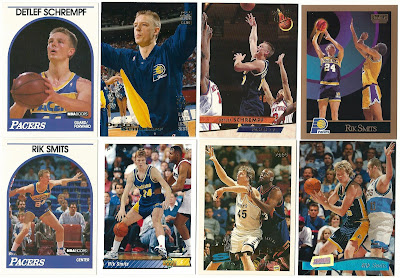 ..but my all-time favorite Pacers player is Reggie Miller.

Dennis sent 31 cards of #31 in the big box I received last week: 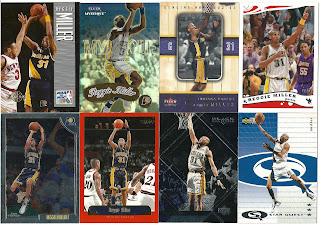 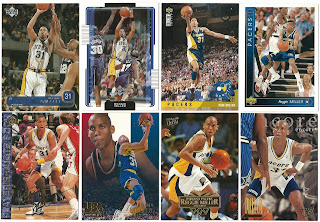 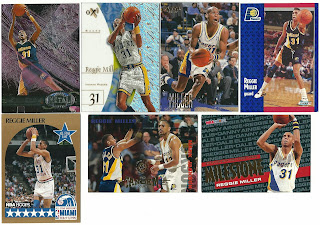 I think I have over 40 Miller cards now, which has to be the most I have of any one NBA player. Thanks again, Dennis!

The only other Pacer in my star player box is Paul George, or "Playoff P" as he calls himself. 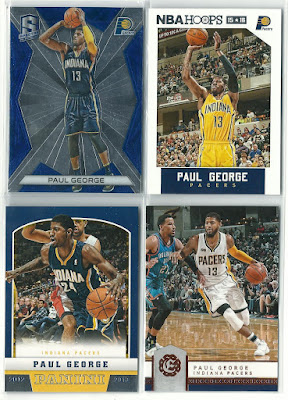 I have one more George card in my 2015-16 Donruss box. (I'm keeping these separate from the rest of my basketball cards - for now.) 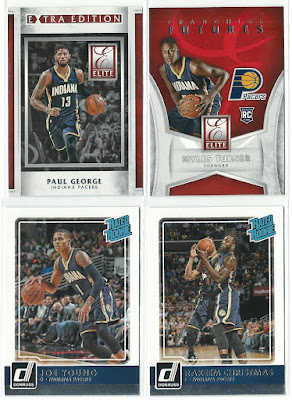 Myles Turner might be the only current Pacer in my collection. 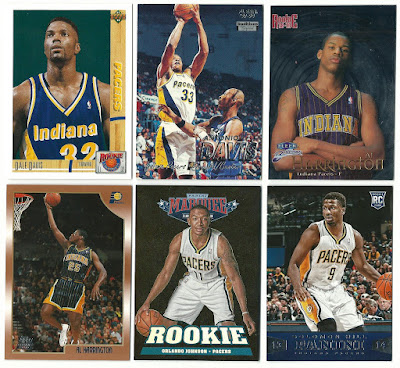 The Antonio Davis crystal parallel was one of a baker's dozen in the eBay box. 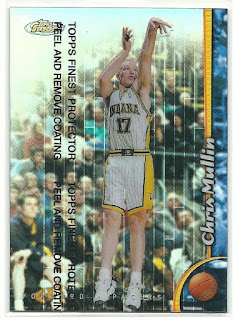 I bought this Chris Mullin refractor for just over $1 on COMC. 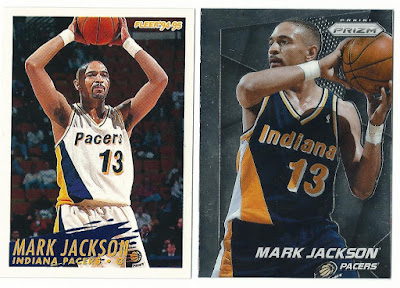 Mama! There goes that man. Mark Jackson, Mullin, and Miller were teammates on the 1999-2000 Eastern Conference champion Pacers - the only finalists in the franchise's NBA history. 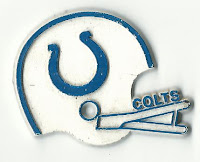 I have no personal ties to Indiana - but a lot of my favorite athletes and entertainers do. My favorite comedian Jim Gaffigan has Indiana roots. Don Mattingly and Larry Bird (head coach of that 2000 Pacers team) were among my favorite sports stars of the 80's, and one of my all-time favorite football stars is Colts legend Peyton Manning. 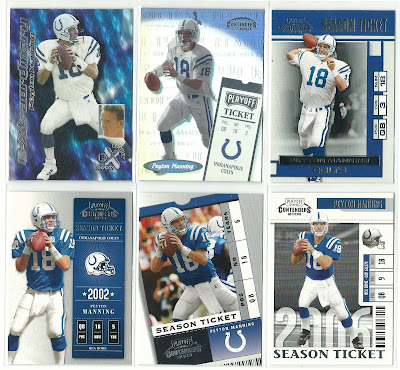 Manning was a maestro on the field, and he's been just as much fun to watch off the field, appearing in at least a dozen commercials, guest-hosting Saturday Night Live, roasting Ann Coulter Rob Lowe and hosting the ESPYs. 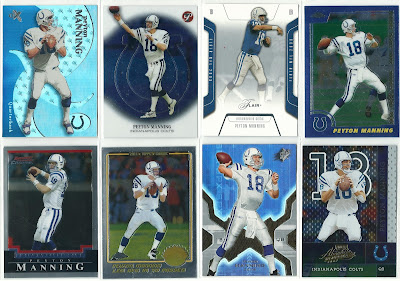 For a while it seemed like Manning and the Colts would never get past their arch-rival Patriots and win the big one - but the five-time NFL MVP led Indy* to its only Super Bowl victory in 2006. 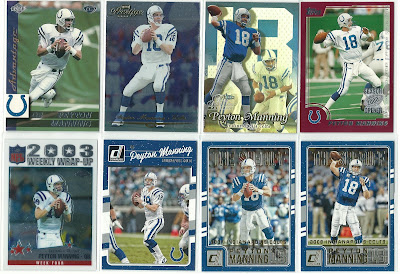 I was thrilled for "The Sheriff" - especially since he beat Tom Brady and my team's arch-rival, the Bears.

I've never had any Manning relics or autos, though my dream football card would be a triple auto of Dan Marino, Brett Favre, and Peyton. I did have some of his lower-end RCs like Playoff Prestige and UD3, but I sold them for an upgrade: 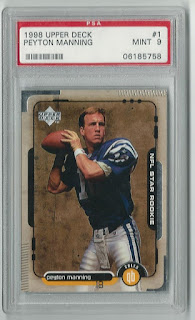 This is likely my only Manning RC; I had two copies of his 1998 Finest RC (one was part of a complete set) but I think those are gone, too. 90's Finest/Chrome cards do not hold up well.


The Colts' line of succession rivals only the Favre-Rodgers era in Green Bay. Manning led the Colts to ten or more wins in 10 of his first 11 seasons, then missed the entire 2011 season with a neck injury. After the Peyton-less Colts finished the season 2-14 they drafted Andrew Luck first overall.

For a guy with horseshoes on his helmet and "Luck" on his back, Andrew has already had more injury misfortune than Manning. Luck missed the entire 2017 season with a shoulder injury, and Indianapolis finished 4-12 without him. The Colts traded down with the Jets and will pick 6th overall in tomorrow's NFL Draft.


Because I've stopped buying new football products, I don't have any Luck base cards. The Colts cards in my star player box are all retired players. 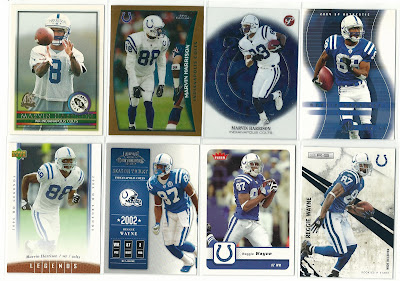 Have I mentioned how much I love 2002 Topps Pristine?

These blue refractor cards were cheap COMC buys. The Harrison Masterpieces was part of a trade stack I claimed from Chris (Nachos Grande) 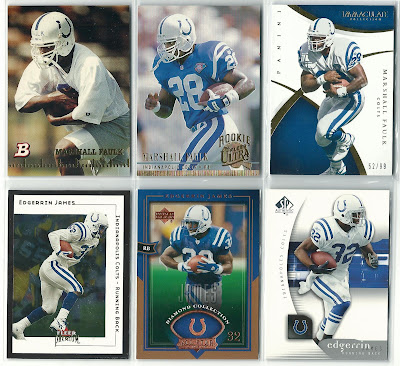 I wrote a statistical analysis post about running backs and accidentally proved that Edgerrin James should be in the Hall of Fame ("accidentally" because the post subject was then-Colts RB Frank Gore.) 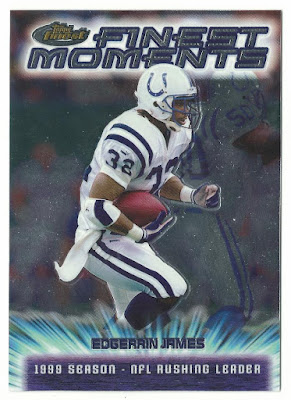 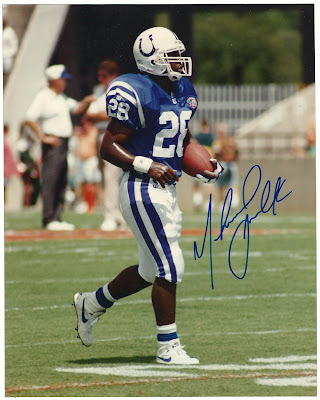 In my Green Bay post I mentioned that I bought a few autographed 8 x 10s at a memorabilia store in my local mall. This Marshall Faulk auto was in the group; the first one I picked out was smudged and I marched back into the store and switched it out. 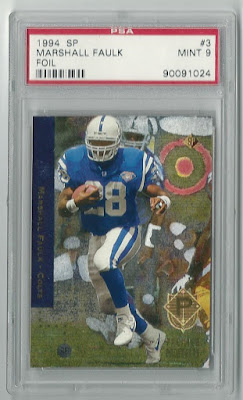 My other PSA-graded Colts RC. Marshall Faulk was the best all-around back of my generation; I'm surprised that this card was only $10.

Like Faulk, Eric Dickerson also ran for the Colts and Rams. This is the only Colts relic in my collection; it's numbered to 75. 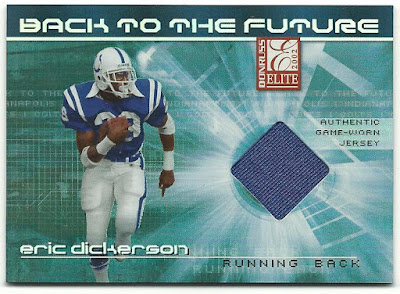 I've got a small Dickerson PC, including an unopened Starting Lineup figure from 1988 and his 1984 Topps RC, which you'll see in my Los Angeles post.

The latest addition is this "1987" Donruss card, which cost me a mere 45 cents on COMC. 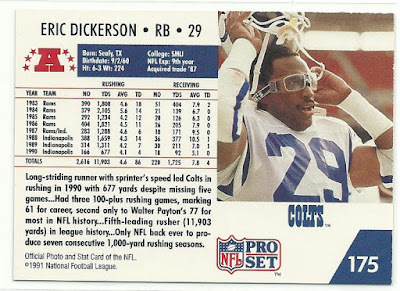 The NFLPA logo is missing at the bottom because Pro Set.

All of the items you've seen in this post are in my possession - until now. I wanted to acknowledge the fact that hockey legends Wayne Gretzky and Mark Messier started their pro hockey careers with the WHA's Indianapolis Racers before the team folded in 1978. 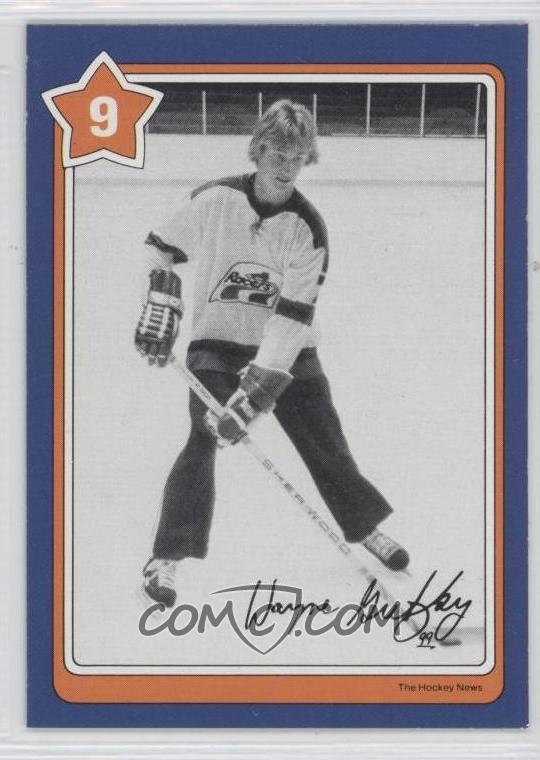 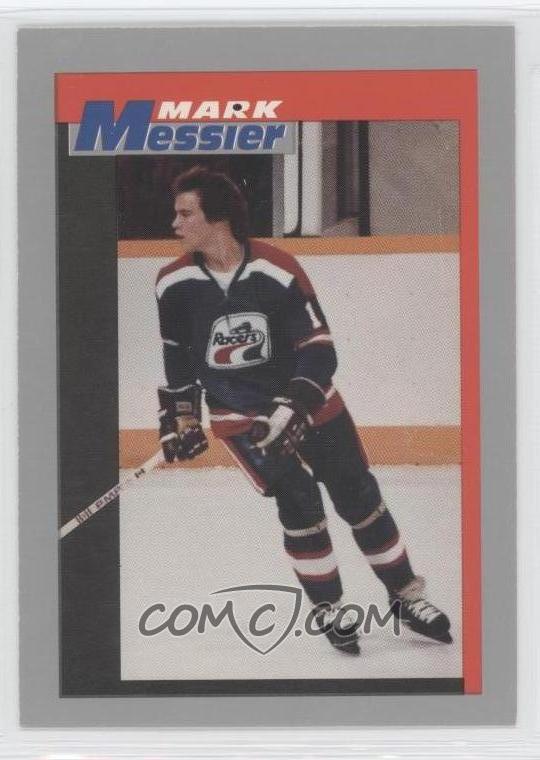 There are a couple mainstream Gretzky issues that picture him with a Racers jersey, but I don't have them in my collection. And if I'm going to show you cards I don't have, why would I choose a black-and-white card from 1990-91 Topps?

This aftermarket oddball looks like it belongs in a repack - but it has actually been the subject of confusion, as some sellers have tried to pass it off as a legit pre-rookie card.


Colts card I'd like to own: A Peyton Manning relic

Pacers card I'd like to own: Eventually I'd like to complete the 1988-89 Fleer set, and the Reggie Miller RC is one card I still need.

Favorite Pacers player: TBD. Let's see how this series with the Cavs shakes out.