Obviously I didn't get to Cooperstown this year, as I had originally planned to for my 40th birthday. I was looking forward to seeing how much has changed at the Baseball Hall of Fame since the last time I visited in 1999.

That year I made a point to pick up some postcards in a gift shop, as the museum produces these for every inductee. According to the Trading Card Database this series began in 1965. I know I picked up at least two during my initial visit to Cooperstown in 1991. 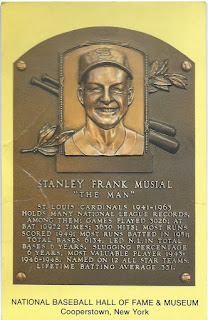 This Stan Musial postcard was uncovered during my crawl space cleanup. It's got a few creases but it still looks better than the reprinted version featured on TCDB. I also bought a Roberto Clemente postcard back then, which I taped to a gift envelope from my Sports Illustrated subscription. 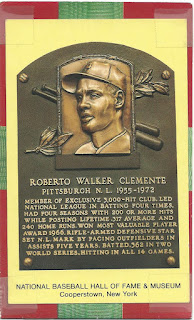 Last weekend I began downsizing my sports memorabilia collection and uncovered my stack of plaque postcards including this Clemente. I'd forgotten why I taped it to the back of an envelope -- turns out my young self filled it out with the intention of sending it to my best friend at the time. I'm not sure why I never sent it, but we weren't friends for much longer after that summer. 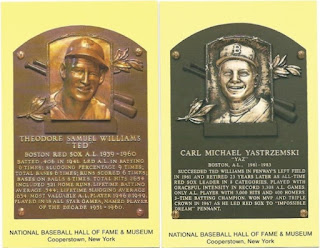 These two Red Sox were not in the stack; they were part of a Christmas gift from Dennis in 2018.

The other eight postcards in my collection were purchased during my return visit to the Hall eight years later. All of them have printing dates of either 1998 or 1999 on the back. 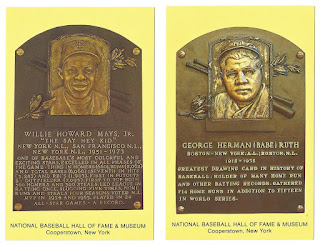 Two more legendary outfielders here. Not sure why I didn't choose Hank Aaron but if I ever go back to Cooperstown I'll be sure to add him to my shopping list. 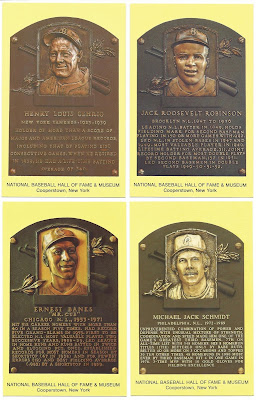 I think I tried building an All-Time Team and left out a catcher for some reason. 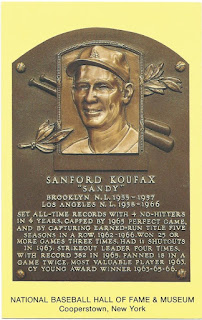 Sandy's gonna need someone to throw to. I'll probably pick up a Bench or Campanella 'card on my next visit, along with some right-handed hurlers like Pedro Martinez. 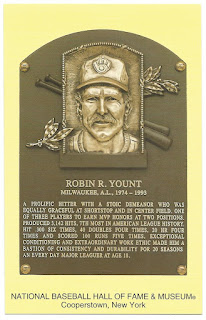 Birthday boy Robin Yount was part of the Class of 1999, inducted just a few weeks prior to my visit. I looked all over town for a #19 Brewers throwback jersey and didn't see a single one. There were plenty of Nolan Ryan and George Brett jerseys for sale though.

Yount played his last game in 1993, which I will use as an excuse to plug my new blog about all things '93. I added a quick post there this evening and there are plenty of interesting stories and topics in the works so add The 1993 to your blogroll if you're not already following  :)

Do you have any postcards from the Baseball Hall of Fame?