I haven't been in a creative mood lately. My brain has this bad habit of wanting to write five posts in one week and then none at all. My next post will be a long story about leaving my childhood home for the last time, and so I'll keep this preview as brief as possible. 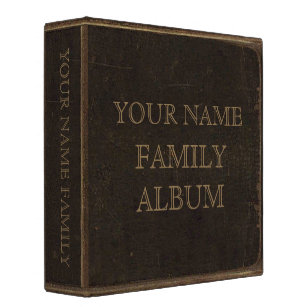 My mom packed up several boxes with my old school papers and things I'd long forgotten. I found a copy of the West Haven News dated November 1, 1984. My mom had the front photo on our fridge for years. I remember it well. I'm sitting on a bench with my preschool classmates. What I'd forgotten - or never seen - was the headline above it. Vice President George Bush had visited our town just days before the election. (I'd show you the front page but my mom doesn't have a scanner.)

I consolidated some of the boxes so that my mom wouldn't have so much to carry. There was an old photo album with family photos on the first few pages. I'd used the last few pages as my own personal scrapbook. Two pages were dedicated to a girl I'd crushed on in fifth grade as a result of her performance at a school talent show.

The page before that had a single baseball card stored in a cut-up 9-pocket page,  sealed in the cellophane of the photo album page. It was almost certainly the last card left in that house, though I wouldn't be shocked if someone uncovered a couple more in a corner or underneath the flooring. 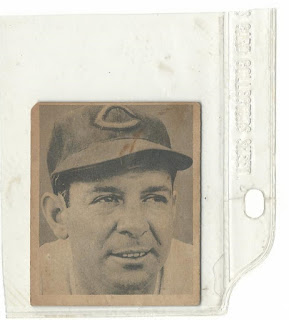 This is a 1948 Bowman card of Cincinnati Reds outfielder Augie Galan. Galan was nearing the end of a 16-year career when this card was released. I was excited to uncover this gem, which was certainly the oldest card in my collection at the time. As I examined the snipped corner at the top left and what appears to be crayon marks on Augie's hat I tried hard to remember how I could have acquired this card. It's a shame because I have specific memories of several cards I owned as a boy - but not this one.

That said, I have seen Galan's name listed on baseball-reference a time or two and briefly thought to myself Augie Galan.. why does that name sound familiar..? 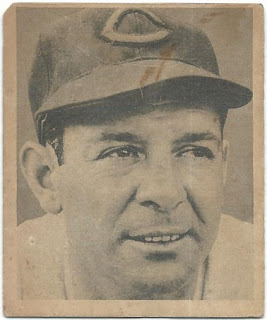 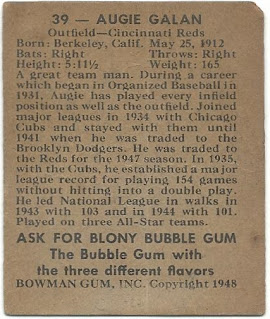 There's an insane amount of sports this weekend: NHL Stanley Cup finals, NBA conference finals, the final weekend of the MLB season - and some great NFL games including Packers-Saints tonight.

What will you be watching?