Let's look at the remainder of my COMC order - baseball cards and set fillers. 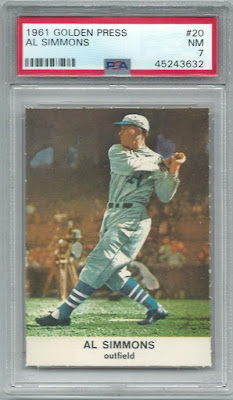 This slabbed Al Simmons single cost $8.00 and pushes me past one-third completion of the set (12/33). Every player/manager in the set is a Hall of Famer, but I definitely started this set build with the less heralded legends. 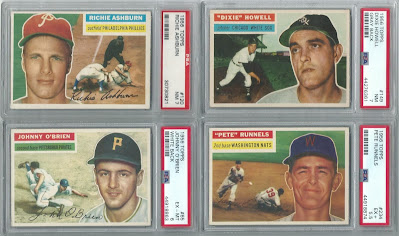 Here's the heart of the order - more 1956 Topps cards. Ashburn was my most expensive purchase at $36.20. Howell cost $19.78. O'Brien and Runnels were a package deal at $25.50 total. I'm not setting any goals for 2021 but this will be a priority now that my base card binders and boxes are filling up. 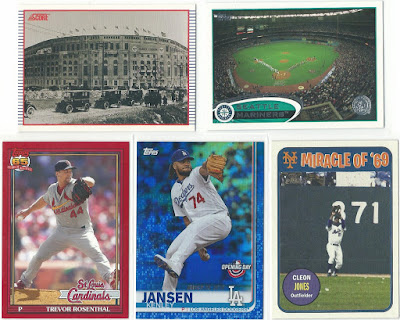 Another project I'm going to prioritize is my All-Time Teams collection. Yankee Stadium and the Kingdome were upgrades from 1994 Score singles. The Topps team issue stadiums are often tough to find. The red Rosenthal was a must-have. It's numbered to 50 and set me back a buck and a quarter. 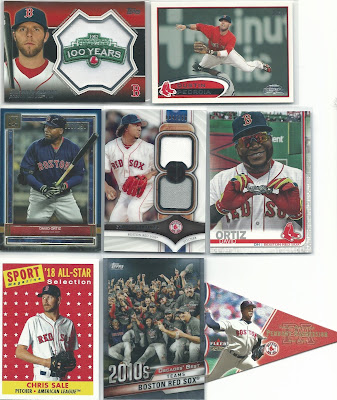 I only picked up eight Red Sox cards from Black Friday 2019 to September 2020. The Pedroia manu-relic had been sitting on my watch list for about three years. 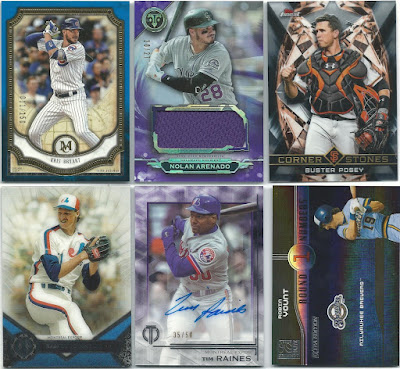 When I shopped on COMC I would occasionally search for bargain singles from high-end products I'll never break, such as Topps Tribute, Triple Threads, and Museum Collection. Two of the best bargains I found: the Nolan Arenado relic #d/27 ($3.25) and the Tim Raines auto #d/50 ($5.05). Not everything was a steal however. I paid $2.93 for the Bryant blue parallel #d/150, which seems quite high by comparison. Finally, here are some more set fillers I picked up. This reminds me that there is one more set I'm one card away from completing. I've got all 400 base cards from 2018 Topps Big League and all but one of the Players' Weekend variations (anyone have a Rhys Hoskins for trade?)

The response to my NFL Week PWE Swap Meet has been overwhelming. Literally. I've received over 1,000 football cards including a third PWE from Bo and a box from Trevor that arrived yesterday. I can't possibly send a 1-for-1 return when someone drops 400+ cards on my doorstep, and even if I could it's impossible for me to stand in line at the post office right now. But I'll send something out soon. Big thanks to Trevor, Bo, and everyone who has participated so far.

I've been preparing the prize box and I will reveal the winner on Tuesday, December 29 - which will probably be my next post since I've got a lot of All-Time Teams stuff to work on before and after Christmas. If you're really feeling generous I'd be thrilled to get some feedback on the fiction piece I published here. It's nothing major, just something I wrote for fun.

Hope you all have a Merry Christmas (I'd say Happy Hanukkah but I know it just ended.) See you next week!