This past Saturday I received a surprise package from Brian, author of Highly Subjective and Completely Arbitrary.  Apparently I'd won a contest at the end of 2019 by correctly guessing Brian would choose 1974 Topps as his next setbuild. My prize for winning this completely arbitrary contest was a repack box with a 1974 Topps Cecil Cooper showing: 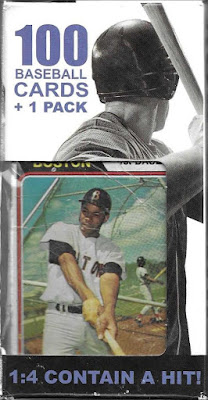 If I ever went anywhere interesting this would make a great wallet card.

This custom-made repack was loaded with Red Sox - and there was more than one hit included: 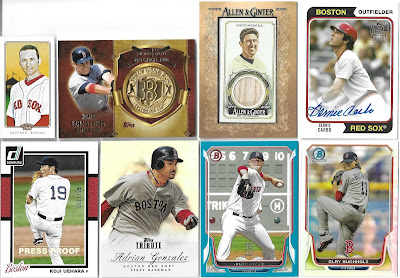 The Bernie Carbo autograph (in the '74 Topps design) is my favorite here. 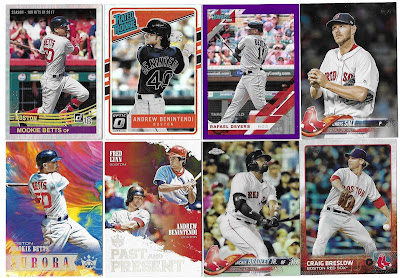 More shiny. The Aurora insert is really nice. I'm interested to see where JBJ will sign - and when. 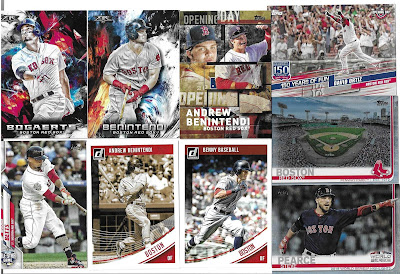 Lots of guys who aren't Red Sox anymore. I think Benintendi will break out in Kansas City. 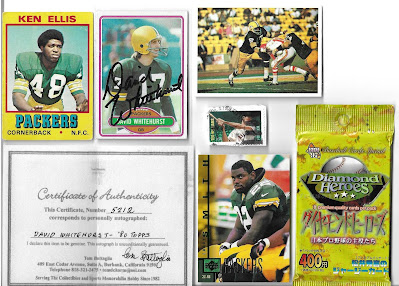 Some Packers oddballls and a Ted Williams stamp. It's not every day that I add a new Packer to my collection but this is definitely my first card of Emmitt's brother Emory Smith (he's not even listed on Pro Football Reference) The Ken Ellis is a Wonder Bread issue, and the David Whitehurst comes with a COA. As promised, the repack came with a sealed pack - BBM Diamond Heroes. I haven't opened it yet.

Brian, thanks again for the surprise repack!

About ten days ago I placed an order on the Beckett Marketplace. I was on the hunt for some missing All-Time Teams players and found a seller who offered free shipping with just a $12 purchase. I filled my cart with 17 cards totaling $22.60 - a third of that ($7.50) was for a 1969 Topps Reggie Smith single listed as "Near Mint-Mint" - and placed my order. Usually I get an email within a day or two if any cards were out of stock - which was apparently an issue with other collectors who bought from Mac's Collectibles.

I didn't get an email that anything was out of stock, and I didn't get an email that my order had shipped. A week after placing the order I emailed Mac's and asked them for an update. I got no response. Today the entire $22.60 was refunded without an explanation. Just an FYI for those of you who shop on the Marketplace - unless you're buying from Burbank or 7th Inning Stretch, proceed with caution.

Guess I'll have to fill those All-Time Teams needs through TCDB trades...