The tour bus has crossed the border for our first stop in a Canadian city. Today we're in Calgary.

Calgary has two professional sports teams - if you count the CFL's Stampeders. I've never watched Canadian football and don't have any CFL cards, so for purposes of this post we'll focus on the Flames. 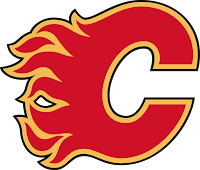 The Flames franchise originated in Atlanta, joining the NHL as an expansion team in 1972 along with the much more successful New York Islanders. (I didn't have any room in my Atlanta post for these Flames cards, so I'll scan them here.) 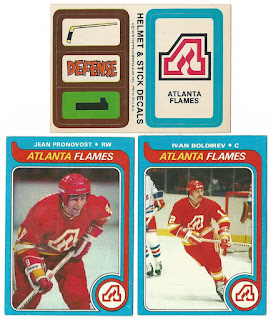 Once the franchise arrived in Calgary, the Flames had to get past provincial rivals the Edmonton Oilers, led by legendary players Wayne Gretzky, Mark Messier, and Jari Kurri. Calgary had a few Hall of Famers of their own - including Lanny McDonald, Al MacInnis, and Joe Nieuwendyk. 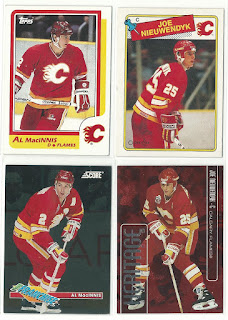 I bought a ton of 1993-94 Score hockey, mostly to get those Franchise inserts. That year I sent a few TTM autograph requests and MacInnis was nice enough to sign my base card. Unfortunately I don't have it anymore - and I don't know what I did with it.

My wife was a big Theo Fleury fan and got his autograph (she also bought a biography signed by the author) We have over 120 Fleury cards combined; I gave her all of mine so I don't quite remember which were mine. 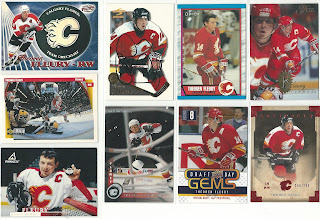 Theo was a rookie when the Flames won their only Stanley Cup in 1989, and became the face of their franchise throughout the 90's.The first Fleury card I ever got (probably 90-91 Pro Set) said something like "Theo makes up for lack of size with heart." Did he ever!


When Fleury left Calgary in 1999, another young winger was ready to take the reigns: 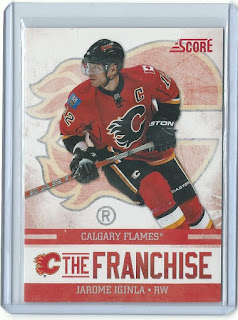 Jarome Iginla is the Flames' all-time leading scorer, and the first black player to a) be named a team captain, b) lead the league in goals, and c) lead the league in points. He was also an MVP finalist three times, led the Flames to the Stanley Cup final in 2004, and came this close to raising the Cup. 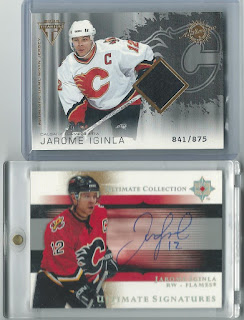 These are the top two Iginla cards currently in my collection (I also have a PSA-graded  rookie card from 1994-95 SP) A few years ago I had an even cooler card; Upper Deck sent a pair of replacement cards for an unfulfilled redemption - including a Trilogy Personal Scripts autograph which he signed using his nickname "Iggy". (Kinda wish I'd kept that one.)


One of my earliest hockey card memories involves this Jamie Macoun rookie card from 1984-85 O-Pee-Chee. 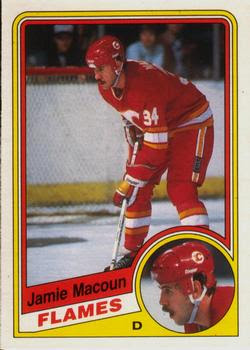 When I was about 11 or 12 my mom and I drove to northwest CT to see my father (he was in a halfway house or something.) Along the way I stopped in a sports card store and found a box of 80's hockey singles - which was very new and exciting to me at the time. I picked out a handful I liked, including this Macoun. With only a few dollars to spend I was careful not to pick out any star players - and I was flabbergasted when the store owner charged me the full Beckett price of 75 cents for this card. I still bought it, though.


The red Flames sweater was one of my favorites back then. There was a store downtown that sold hockey equipment - sticks, skates, gloves..you name it. They also had a rack of replica jerseys. My sister bought me a Penguins sweater one year as a Christmas gift. I didn't like the Pens, so I exchanged it for a Flames jersey.

When my brother's friend saw me watching playoff hockey and sporting this very out-of-market jersey he did a double-take. "Calgary?" He said. I loved that jersey, but the polyester material pilled rather quickly; it didn't last more than a year or two.

By now you've probably had your fill of Flames info so I'll just scan up some of my favorite cards and move this along. 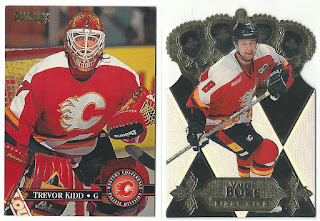 Trevor Kidd was drafted ahead of Martin Brodeur in the 1990 draft; the Devils actually traded down to facilitate Calgary's selection. Valeri Bure (Pavel's brother) is married to Full House star Candace Cameron. 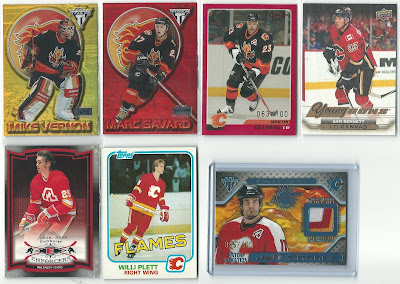 2000-01 Titanium was one of my favorite high-end products..back when I had enough discretionary income to buy high-end hockey cards. My wife and I pulled the Vernon gold and Shantz patch out of a hobby box; the Savard was $0.85 on COMC. 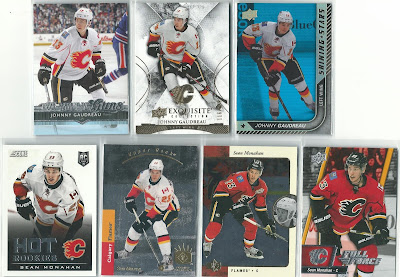 Today the Flames are led by star forwards Johnny Gaudreau and Sean Monahan. New Jersey native "Johnny Hockey" is currently 5th in the NHL in points - ahead of such superstars as Alex Ovechkin, Steven Stamkos, and Sidney Crosby. I've flipped a couple nice Monahan cards on COMC - including his SP authentic RC and a Scripted Swatch auto. 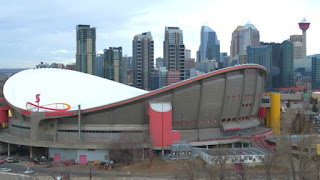 Calgary's iconic Saddledome is the NHL's second-oldest arena, behind only the recently refurbished Madison Square Garden. It was built in advance of the 1988 Winter Olympics - an event that gave us Eddie the Eagle and the Jamaican bobsled team.  But it is obsolete by today's standards and, unlike their Alberta brethren in Edmonton, the city of Calgary seems unwilling to spend taxpayer dollars on a new playpen for millionaires. There is growing discussion that the Flames may relocate once again - this time to Seattle. As much I would love to see an NHL team there I'd prefer they  get an expansion team (or the Hurricanes.) It would be sad to see the Flames leave Calgary after nearly four decades.

Flames card I'd like to own: A Jaromir Jagr sunset card

...though it might be a while before my next SCT post. I might have a bit of personal news to report. If so, it could slow this tour down (but it would be for a very good reason.) If not, I'll be back to posting these about 2-3 times a week. Thanks for reading!