Howdy, y'all! The Collector's Sports Card Tour is making its first stop in the Lone Star state. Today we're in Dallas.

Dallas has two pro sports teams - the Mavericks and Stars. The Dallas Cowboys don't actually play in Dallas, and haven't done so since 1970(!) Their stadium is adjacent to the Texas Rangers' Ballpark in Arlington.

The Mavericks were the last Dallas-based team to win a title, when they beat the Heat in the 2011 NBA Finals. The Rangers were one strike away from winning their first World Series that same year; they are the only area team without a championship. 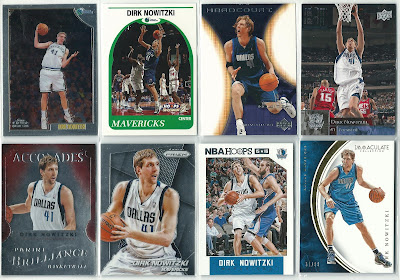 Dirk Nowitzki is nearing the end of a legendary career. He's played 20 years with only one franchise, matching Kobe Bryant's NBA record. If Dirk returns for a 21st season, he could pass Wilt Chamberlain for 5th on the all-time scoring list.

I have a decent amount of Dirk cards, as he's one of a handful of players I collect. Steve Nash is another. 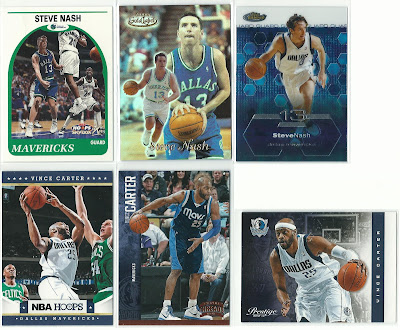 You'll see some more Vince Carter cards when we get to Toronto. I'm not a fan of the current Mavs logo - whatever it is. I prefer the classic cowboy hat on basketball. 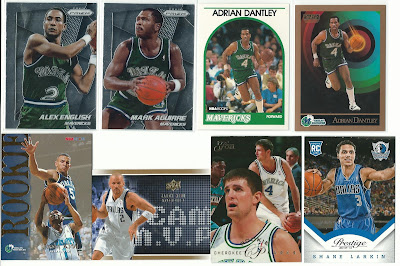 In fact I bought a logo magnet back in the day. Not sure if I showed this last year, when Jon sent me so many of these great hoops cards, but here it is again: 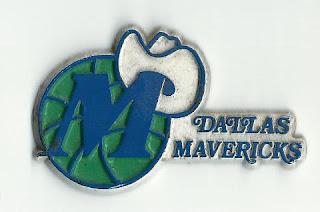 Wish I could remember exactly when I bought it. Must have been after 1990, because I also have an Orlando Magic magnet.

I was intrigued by the possibility of Mavs owner Mark Cuban running for president - until recently. We've already seen one Texas-based team owner become leader of the free world. Perhaps Cuban would be the fiscally responsible/socially progressive centrist this country needs. Or perhaps President Cuban is a concept we should save for Sharknado movies.

Enough political talk..let's stick to sports, shall we?

It always amazed me that Nolan Ryan could still pitch No-Hitters well into his 40's. I remember seeing his Advil commercial a lot as a kid. 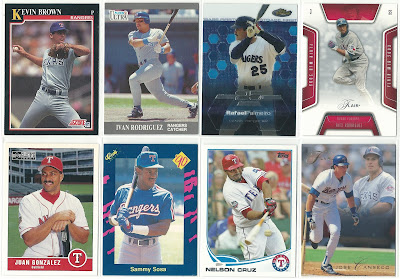 What do these players all have in common? Leave your answer in comments. (I should do more trivia questions or contests within these posts.) 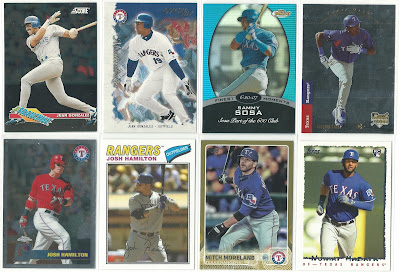 The rest of my Rangers round-up. I once had a Nomar Mazara Bowman Chrome prospect auto, but I sold it to fund my '56 Topps set. My collection is dramatically shifting from recent high-value RCs to vintage and lower-priced shiny stuff. 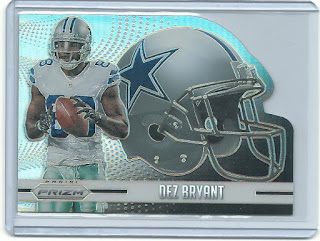 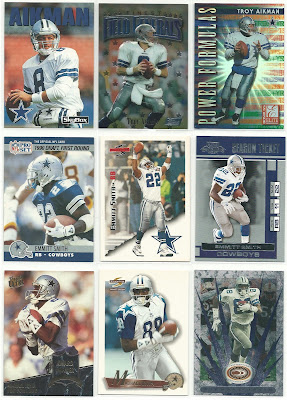 Personally, I couldn't stand 'em. The Texas-sized swagger of the self-proclaimed "America's Team" always aggravated me. And it didn't help that my Packers couldn't get past them in the playoffs. Back in the 90's, I thought Troy Aikman was overrated, Michael Irvin was an obnoxious coke head, and Emmitt Smith only cared about his own stats. 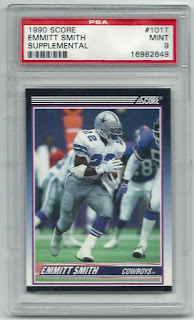 And yet the best Dallas card in my collection is this Emmitt Smith Score card, which I acquired a few years ago when I was hoarding Hall of Famer rookie cards. I might have bought the Aikman too, but 1989 Score is so boring! 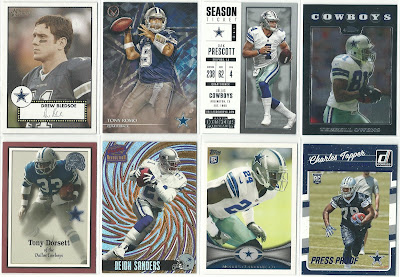 It was a lot more fun watching T.O. spike the ball on the star than anything he did for Dallas. My sister had a Tony Dorsett jersey in the 70's or early 80's. I saw it hanging on a clothesline in my mom's basement a few years ago. Don't know what she did with it.

I pulled a Tony Romo RC out of a 2003 Ultra pack I bought at Toys R Us...but I sold or traded it before he became a big deal in big D. The Stars will never outshine the Cowboys in the DFW area, but they won the social media battle and a more recent championship. 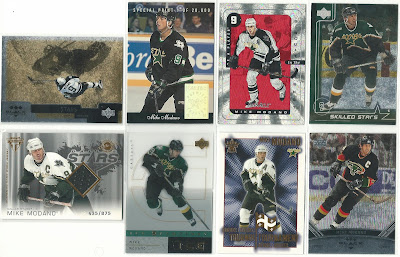 Mike Modano wasn't captain of the 1999 Stanley Cup champions, but he is the all-time leading scorer among American born players (and he had a cameo in the Mighty Ducks movie.) 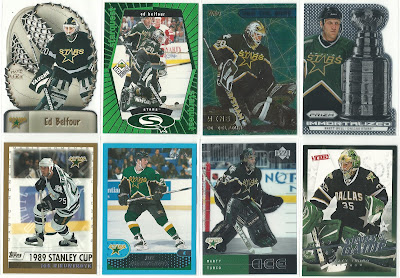 Pacific made some of the coolest insert cards ever, including Glove-Side Die Cuts. Brett Hull's controversial goal clinched the Cup for Dallas. Hall of Famer Joe Nieuwendyk won three Cups with three different teams (Flames, Stars, and Devils.) Marty Turco is a Michigan alum; I've sent a few of his cards to Dennis of Too Many Verlanders/Manninghams. 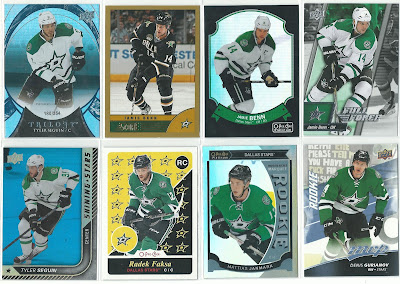 Current and future Stars. Jamie Benn led the NHL in scoring in 2014-15; the Full Force base card above came from a free gift pack at Dave & Adam's. Gurianov was pulled from a pack of MVP my mom bought me as a Christmas gift.


The Stars lost to New Jersey in the 2000 Stanley Cup final. Jason Arnott scored the cup-clinching goal for the Devils..then was traded to Dallas less than two years later. 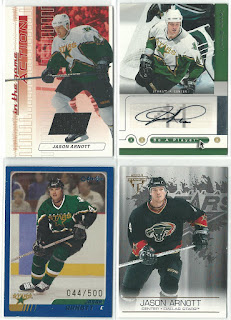 Of course that was far from the biggest trade in Dallas sports history....

Do you remember where you were when you heard the Cowboys traded Herschel Walker? I was in the back parking lot of my elementary school, waiting for the doors to open on a cold and overcast morning. One of the boys standing in line informed the rest of us about the trade, and it seemed like he was telling a tall tale. "He got traded for five players. No, wait..seven players. And a draft pick. No...five draft picks!"

He didn't get all the details right, but it was true. The Cowboys built their dynasty on that deal.


Rangers card I'd like to own: This SSPC Ted Williams card is the only issue I've seen from his one year of managing the Rangers. 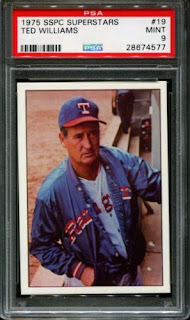 Cowboys card I'd like to own: Maybe an Aikman Score rookie card. Maybe.

Mavericks card I'd like to own: I stumbled across this Dennis Smith Jr. Contenders card while doing some COMC challenges. 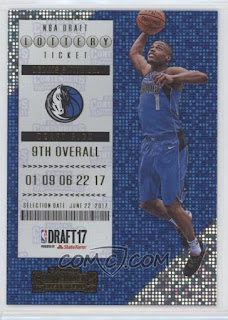 Stars card I'd like to own: A Jaromir Jagr card that pictures him in a Dallas sweater.