The Collector's Sports Card Tour bus has made the cross-country trip from New York to California. Today we're in Oakland. 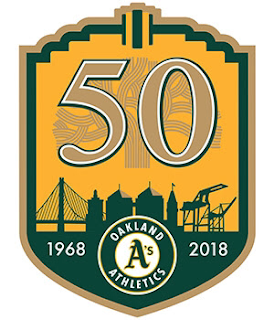 Oakland is home to three pro sports teams - for now. The Athletics and Raiders will share the Coliseum for one more season, while the Warriors are once again hosting NBA Finals home games next door at Oracle Arena. 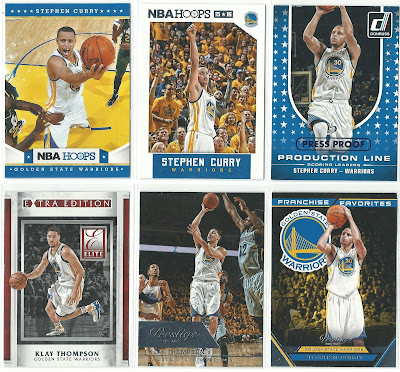 The Raiders will move to Las Vegas in 2019, while the Warriors will return to San Francisco - where the franchise played home games in the 1960's. 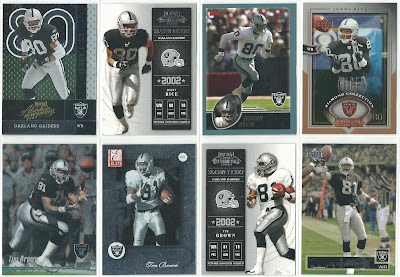 Hall of Famers Jerry Rice and Tim Brown were teammates on the 2002 AFC Champion Raiders. It was the only time Rice was on the losing side of a Super Bowl. 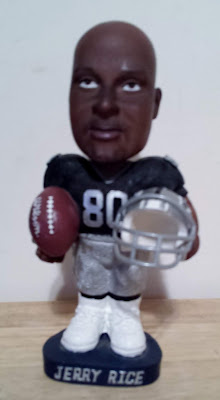 On my walk home one day I found this bobble head sitting on a broken table someone had left on their curb. I stashed it in my hoodie pouch and power-walked home in a drizzling rain. 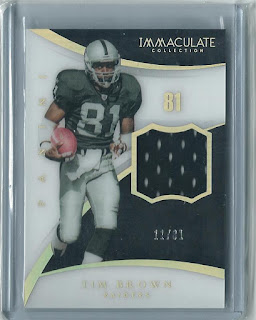 This Tim Brown relic was the first of three Immaculate Numbers cards I've bought on COMC; my newest is a Roddy White patch that cost $1.95 during the Spring Cleaning sale. 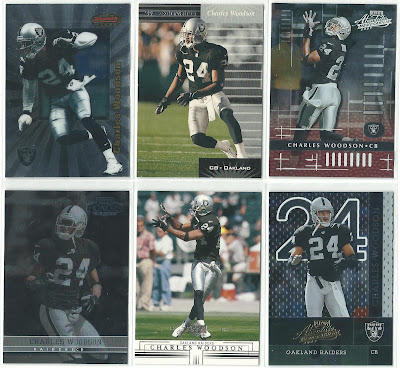 Charles Woodson won a Heisman Trophy at Michigan and a Super Bowl with the Packers.

Three players taken in the 2000 NFL Draft are still active: Tom Brady and these two Raiders draftees. (Who says you shouldn't pick a kicker?)

Silver and Black - in Chrome. The Jerry Porter RC is numbered to 1650. 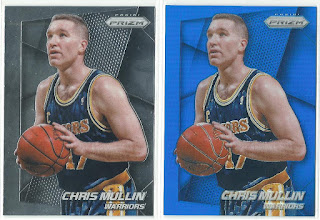 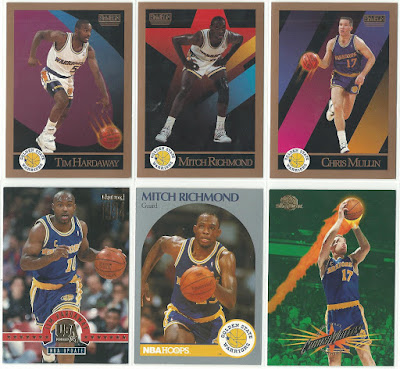 ..and he was also one of the stars of "Run TMC". Mitch Richmond is a Hall of Famer but Tim Hardaway is not. (is it possible homophobia is holding him back?)

One of these players is not enshrined in Springfield. Can you guess which one? Hint: it's the guy who called a time out he didn't have. Is that what's keeping C-Webb out of the Hall, or am I missing something? (Very possible; I thought Hardaway would have been in by now, too.)

I have more Latrell Sprewell cards than any current Warrior except Steph Curry-which is one reason why I need to revamp my basketball card collection. Adonal Foyle played college ball at Colgate; I knew a girl who graduated from Colgate and her boyfriend joked that she had a degree from a "toothpaste school."

The Dubs and Raiders might be leaving Oaktown but the Athletics aren't. 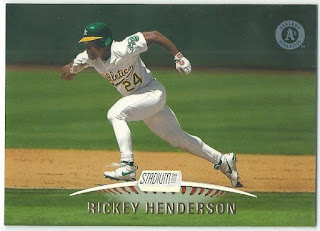 After decades of irrelevance in Philadelphia and Kansas City, A's owner Charlie Finley built a dynasty in Oakland - then tore it down at the dawn of free agency. 1970s cards are the gaping hole in my baseball collection (too old to find in top condition, not old enough to accept in any  condition) I don't have any Catfish Hunter or Sal Bando, and only one Reggie Jackson: 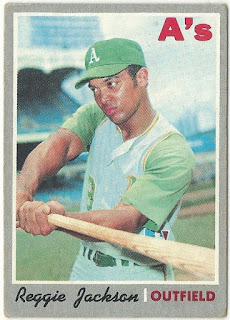 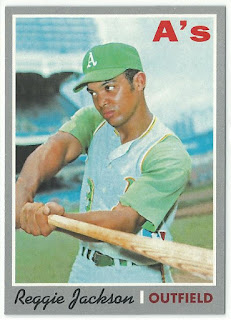 The original was a gift from Wes; I put it next to the 60 Years of Topps insert for comparison. 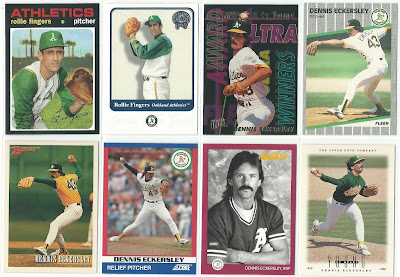 Relief legends Rollie Fingers (sans 'stache) and Dennis Eckersley won the AL Cy Young and AL MVP awards. Mariano Rivera never won either award - for what that's worth. It may be hard to believe (especially if you're under 35 years old) but there was a time when the Athletics had a powerhouse ballclub and the Yankees were baseball purgatory. 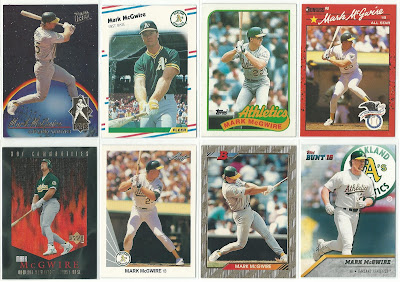 Mark McGwire will be mentioned in my upcoming statistical comparison post about First Basemen. The 1989 Topps set is the junkiest of all junk wax, but here's something I didn't notice until now: McGwire's card is number 70 in the set. 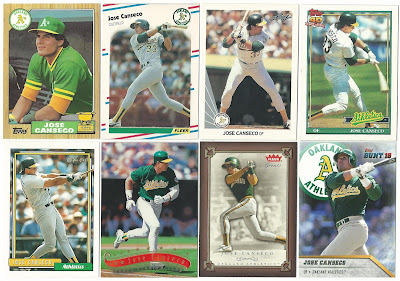 Jose Canseco was the more flamboyant "Bash Brother." Around the time of his 40-40 season I got his autograph at a card show. When I handed him my 1987 Donruss card to sign (long gone from my collection) he raised his eyebrows a couple times as a greeting. 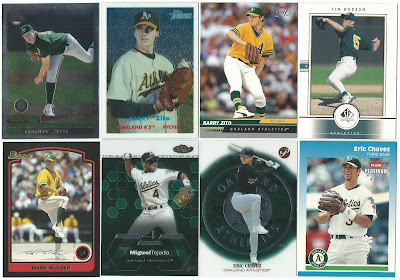 The Moneyball-era Athletics were my best friend's favorite team; when he moved to Alameda a few years ago I asked him if it was for the A's (he said it wasn't.) I remember going to the card shop in our mall and watching him tear through packs of SPx and SP Authentic to try and pull Barry Zito's RC. I think he got Ben Sheets instead. 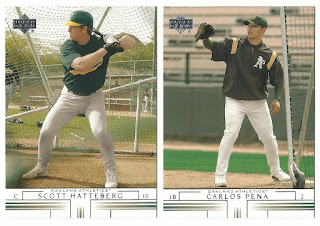 I have quite a few Oakland A's from 2002 Upper Deck - these two cards give me an excuse to show this scene from Moneyball.

Some random Athletics cards, including a pair of repack gems and a buyback I pulled from a repack pack.

Petey Paramore never made it to the show; I only saved this card because I was a huge fan of the band that shares his name.


I know I'm in the minority here, but they went to shit when the Farro brothers left. Anyway... 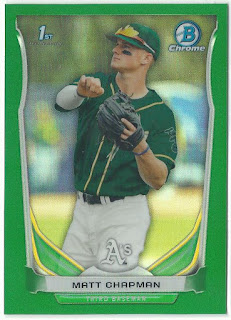 When the Warriors and Raiders leave town, Oakland will have the dubious distinction of losing franchises in three different sports. That's because Charlie Finley's failed experiment known as the California Golden Seals moved to Cleveland..and then disbanded. 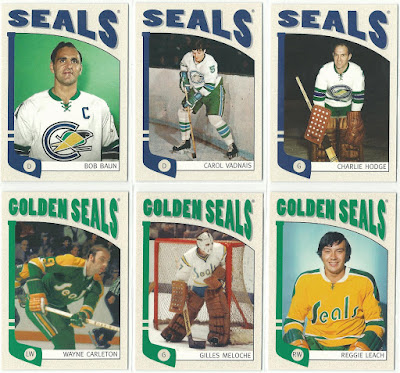 These are part of my 2004-05 In the Game Franchises set (the team was known as the Oakland Seals before Finley rebranded them.) 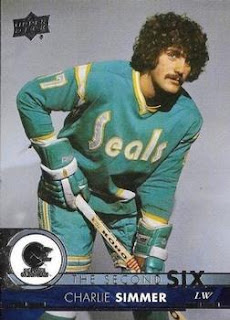 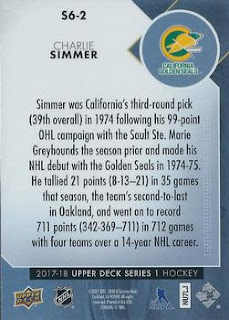 These "Second Six" inserts are very cool. Does anyone know if they're case hits or not? I've stopped buying Upper Deck hockey boxes and they appear to be fairly rare. I'd only be interested in the Seals and North Stars anyhow. Who needs another Gretzky or Crosby? 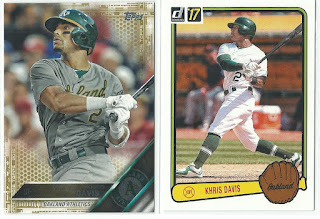 Next tour stop: We're finishing up the O's all weekend, starting with Oklahoma City