Two-thirds of the Collector's Sports Card Tour is in the books. Today we're starting the third period in Philadelphia.

The city of brotherly love is home to four pro sports teams - the Phillies, the Eagles, the 76ers, and the Flyers. The Eagles are defending Super Bowl Champions. The Phillies have won two World Series, in 1980 and 2008. The Sixers' last title came in 1983, while the "Broad Street Bullies" won back-to-back Stanley Cups in 1974 and 1975.


The greatest player in Phillies history - and the greatest third baseman in baseball history - is Michael Jack Schmidt. 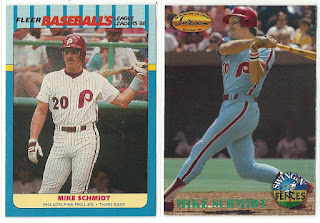 I have ten Schmidt cards in my collection, none of them older than 1984. I've had a Schmidt bat relic card on my COMC watch list for 2 1/2 years. I like the card but the price is unreasonable -even on sale- and at this point I'm just leaving it there to see if it ever sells. That said, it would fill a huge hole in my collection: I don't have a single relic or autographed card of any Philadelphia-based team.

There were a few relics in my collection at various times-including a Nick Foles jumbo relic from Topps Museum Collection. I bought it on COMC for $1-2, brought it home, and sold it with some other football cards before he returned to the Eagles. 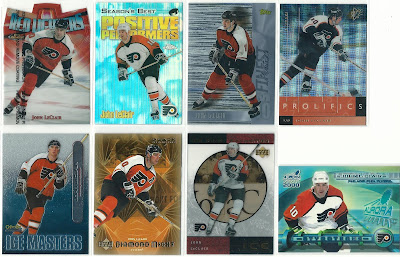 I also had a few John LeClair memorabilia cards, including a Black Diamond dual stick relic. LeClair was one of my favorite players in the mid-late 1990s. Here's a picture of me sporting his jersey in high school: 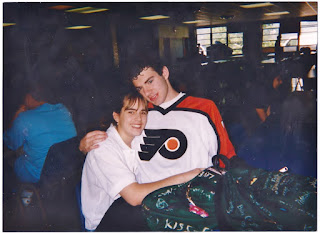 LeClair's "Legion of Doom" linemate Eric Lindros was one of my favorites as well. He entered the NHL with as much hype as Shaq did in the NBA. Both were larger-than-life superstars who attracted casual fans from all over North America. I bought an Eric Lindros poster at a school book fair (along with an Hakeem Olajuwon poster) and spent way too much money chasing his cards.

The owner of my LCS offered me a huge box of hockey cards-including RCs of Brett Hull and other HOFers-for $300. I convinced my mom to help me pay for it largely because there were so many Lindros 'hits.' Most of them are long gone from my collection, but I've held on to a few of them:

When the Flyers won the Eastern Conference title in 1997 it was the first time a hockey team I cared about had won anything. Unfortunately for me the Flyers lost to Detroit in the Cup final. There were more than a few Red Wings fans in my high school - including one who signed my yearbook "Remember the Legion of Broom. Sweep Sweep!" 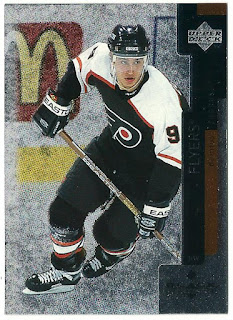 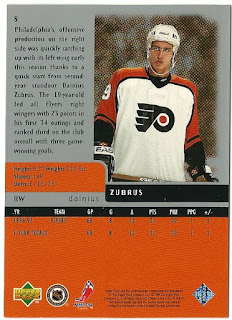 One of the first people I ever met online was a girl with the AOL screen name "Zubrusbabe" because she was a fan of Flyers rookie Dainius Zubrus. I had forgotten all about that until he played for the Devils a decade later.

I was still somewhat of a Flyers fan when Scott Stevens laid out Lindros in the 2000 Eastern Conference Final but Eric's act was already wearing thin. I met my wife a year later and eventually adopted her Devils as my favorite team.

The Devils and Flyers had back-to-back 1st round picks in the 2015 and 2017 NHL Drafts and area fans have been keeping a close watch on who will "win" each pick. 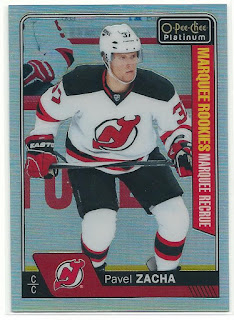 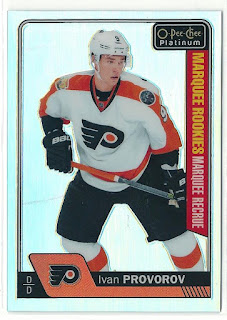 The Flyers are winning this one. Provorov is a top-pair defenseman and Zacha is tradebait. 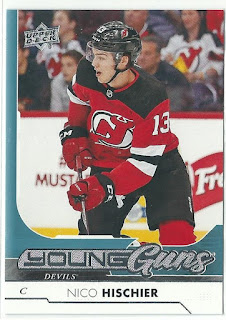 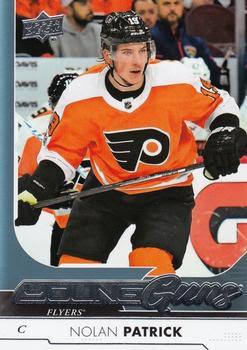 Jersey's got the early lead here - Hischier had a better rookie season than Patrick.

Randall Cunningham is one of my all-time favorite Philadelphia stars. The Eagles QB (who was listed as "QB Eagles" in Tecmo Super Bowl) could throw, run, and even punt when called upon. 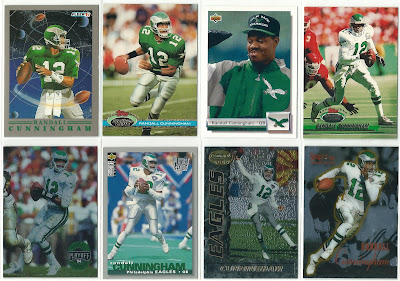 When I was in 6th grade some punk Cowboys fan was talking smack about his team, challenging my sports knowledge, and generally pissing me off. He goaded me into betting $10 on a Monday Night Football game between the Cowboys and Eagles. Everyone in my class thought I was going to lose. And just to show off, the kid (or one of his cronies) told me that for every day that I don't pay up the bet doubles. 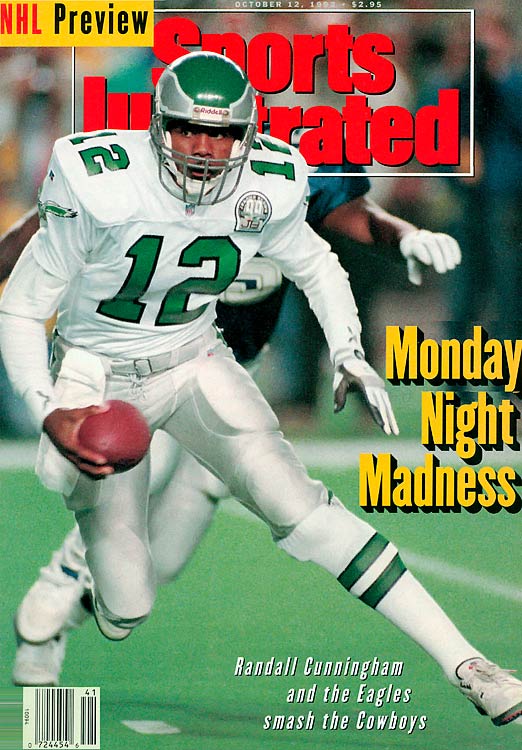 The Eagles won big. That Tuesday morning I felt ten feet tall. All the kids who were certain that I was going to lose knew that I had won. John and his boys at the back of the class knew that they lost.

I held out my hand "Ten dollars please." He slumped down in his chair and mumbled "I don't have it."

"OH?" I said, loud enough for the whole class to hear. "You know it's double for every day you don't pay." The next day he handed me a $20 bill. He said he stole it from his mom. (I don't doubt it.) $20 was a lot of money to me back then - but it wasn't about the money so much as it was the arrogance of that kid, trying to humiliate me and having it backfire in front of everyone.

I rounded up my 1986 Topps Football cards to prepare for a potential set build. There are 17 in my collection - including the Reggie White RC: 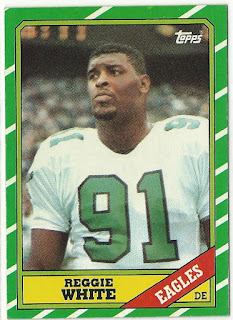 Randall and Reggie never got the Eagles to a Super Bowl - but Donovan McNabb did. 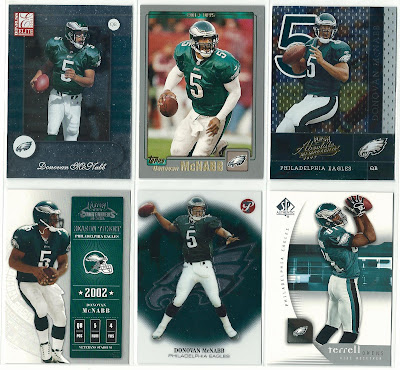 Base cards of Cunningham and McNabb are in my star player box despite neither being HOF-worthy. Terrell Owens will be inducted into Canton this summer - even if he doesn't show up for his own ceremony. 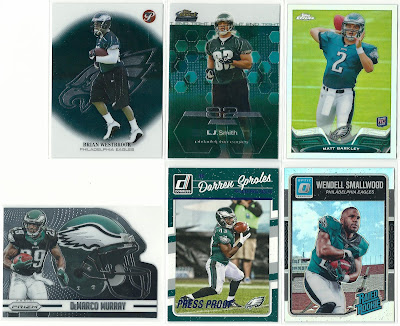 The rest of my Eagles hits. I only have five current Eagles in my collection-and they're all from 2016 Donruss/Optic. My basketball card collection has been rebuilt over the past 18 months. It's time to do the same for football. 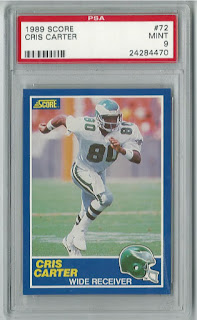 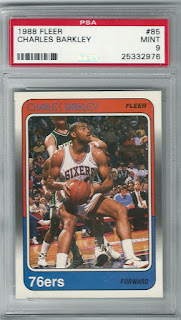 I'm always ending these posts with basketball, so let's change that up. 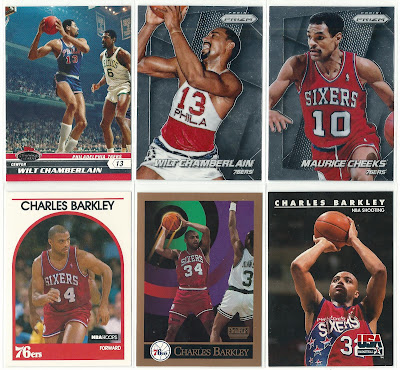 Wilt Chamberlain put up some video game numbers in Philadelphia - with the Warriors. When he returned to the city as a Sixer his stats were less mind-blowing, but still legendary. Maurice Cheeks will be inducted into the Basketball Hall of Fame this summer.

Back when Craig Kilborn hosted The Daily Show he used to ask his guests 5 Questions..one of his guests was Snoop Dogg, and the question Craiggers asked was "Who is the greatest small forward in NBA history?" 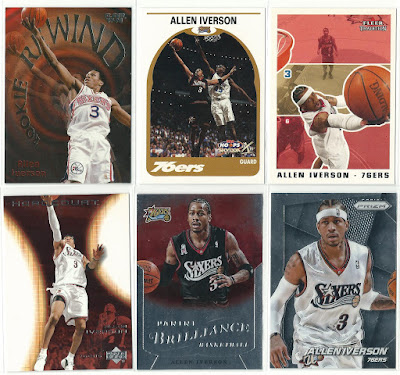 Larry Bird. But Snoop was adamant that it was Dr. J. 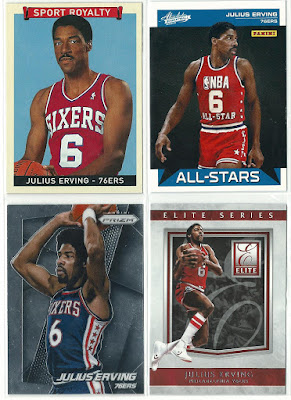 Kilborn told Snoop that was incorrect but the Dogg wouldn't hear it and eventually 'Kilby' relented. I don't know how or why I remember that..but neither answer is valid now.


There's been some talk of King James joining Joel Embiid and Ben Simmons in Philly, to speed up the "process." Personally I think LeBron should sign with Houston..but I'm getting off-topic. I don't have any cards of current 76ers. The most recent Sixer in my collection is this Immaculate bronze parallel of Nerlens Noel..who was dumped off to Dallas a year and a half ago. 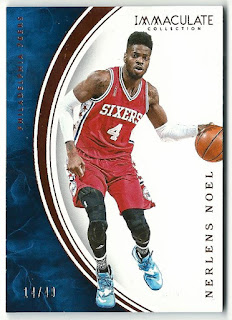 I'm always fascinated when a city's most successful franchise (in terms of winning championships) is long gone from that city. Such is the case with the Philadelphia Athletics. 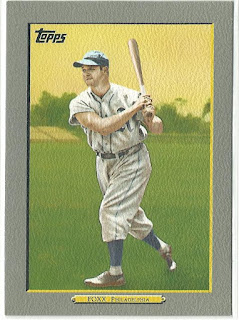 Connie Mack managed the A's for 50 years and won five World Series with such legends as Jimmie Foxx, Lefty Grove, and Al Simmons.

The Philadelphia Phillies have been in business for 136 seasons and have a grand total of two championships.

Mike Schmidt, Steve Carlton, and Pete Rose led the Phils to their first title in my birth year of 1980. 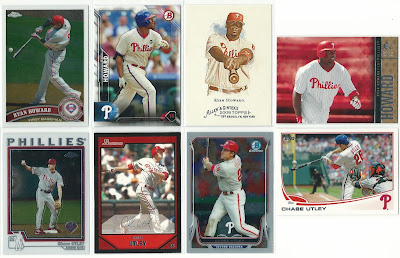 Ryan Howard and Chase Utley powered Philly's offense to the 2008 title. The Phils repeated as pennant winners but lost the 2009 World Series to those Damn Yankees. 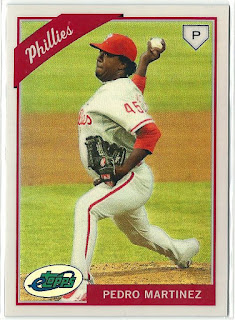 The final two appearances of Pedro Martinez' career were World Series losses in the new Yankee Stadium. I picked up this eTopps card on COMC to memorialize Pedro's "short-term stop." 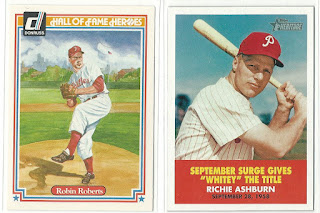 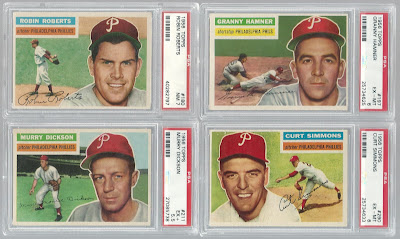 Yet another former Philly star will be immortalized this summer: 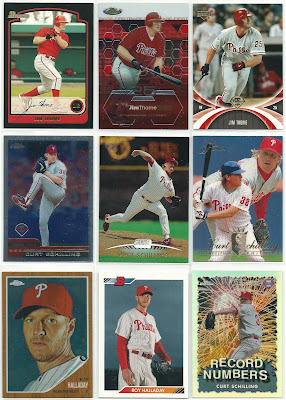 Jim Thome's Hall of Fame induction will come before that of Owens and Cheeks. Phillies aces Curt Schilling and the late Roy Halladay could soon follow Thome into Cooperstown.

The rest of my Phillies hits, including an out of this world insert, a Blue Wave refractor, and a Jackie Robinson Day photo variation. You won't find any of those cards in this book: 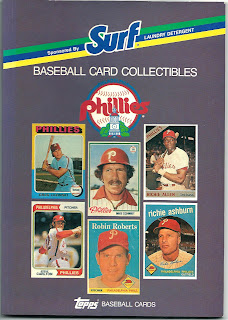 This was given to me by my father in law. He passed away one year ago today. We miss you, Pop.

Favorite Eagles player: I'm pretty pleased with all of them at the moment