I've been falling behind a bit on blogging and commenting due to (among other things) watching the conclusion of the NBA and NHL playoffs. This was a strange year for me. At the start of spring I was more interested in the NBA playoffs: could Indiana upset LeBron and the Cavs? How would the Celtics do without their top two players? What about "small market" teams like the Jazz, Pelicans, and Bucks?

While the basketball playoffs ended with the same two teams for the fourth straight year something amazing happened in hockey. 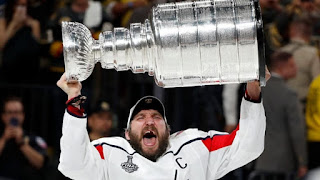 Alex Ovechkin and the Capitals won the Stanley Cup. Finally!

I've been an Ovechkin fan since his rookie year, and whenever the Devils were eliminated from (or not participating in) the postseason I'd adopt the Caps as my "girlfriend team" or whatever the term is. When the Caps beat Vegas Thursday night I stayed up 'til 1am watching post-game interviews, analysis, celebrations.. as if I had been invested in #AllCaps all along.


I guess that's what happens when your favorite player isn't on your favorite team - you end up cheering for other guys to get their names on the cup, too. 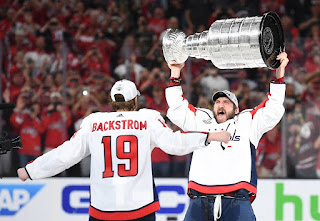 Yes I was pumped to see Ovechkin finally win one but I was happy for Nicklas Backstrom, John Carlson, T.J. Oshie, and Braden Holtbty. Former Devil Devante Smith-Pelly had a monster postseason. Lars Eller was clutch. Tom Wilson was a pain in the ass. Evgeny Kuznetsov probably deserved the Conn Smythe as much as Ovi - if not more.

Ultimately the story of this postseason was about the Great Eight rewriting the narrative and cementing his place in hockey history. And so I thought I'd list the top 8 Alex Ovechkin cards in my collection. Here we go... 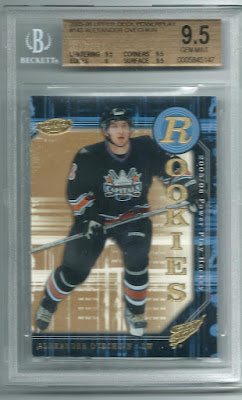 One of my "pack war" prizes was a small stack of UD Power Play rookie cards. It wasn't a complete set - Sidney Crosby and other stars were missing - but Ovechkin was in there. At one point I had this crazy idea of getting all of his RCs graded and so I sent this in to BGS. 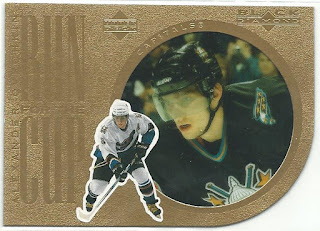 These are a near-exact copy of the Run for the Cup inserts from the first Black Diamond set in 1996-97. The gold-on-gold print is hard to read, but it's a lot cheaper than the 2008-09 version. I paid $6.25 for this card on COMC three years ago. 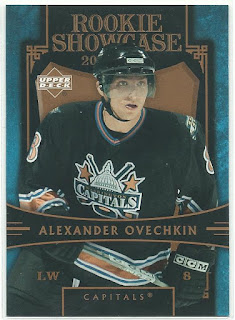 Upper Deck celebrated the double rookie class/end of the NHL lockout with a few promotions, including a free Rookie Showcase card awarded at random. These were one per customer, but not one per household. My family had six or seven entries total - I got Ryan Getzlaf, my wife got Alex Ovechkin. I'm not sure if these are worth much anymore but at one point the Ovi was listed in Beckett for $80-$100.

One of three Ovechkin relics in my collection. All three were purchased at a low price on COMC thanks to the ePack promotion flooding the site with flagship singles. This was the most expensive of the three - and it only cost $6.00. 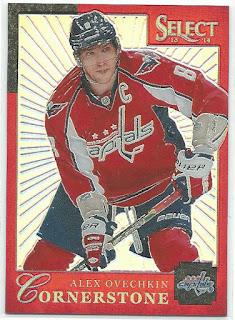 I rarely bought any packs or boxes of Panini products. Most of my experience with Panini hockey cards has come through COMC- which is where I saw this Cornerstone card. I added this to my cart for $6.25 - at the same price (and same time) as the Run for the Cup card. 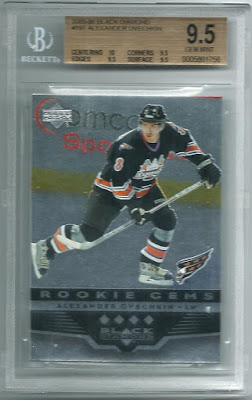 The 2005-06 Black Diamond set is one of my favorites - more for the personal memories and the challenge of completing it than the grey foil design. I've had at least a couple copies of this card - graded and ungraded - and probably overpaid for this one. This is my second best Ovechkin RC; I sold the Upper Deck Young Guns card with the rest of the set last year. 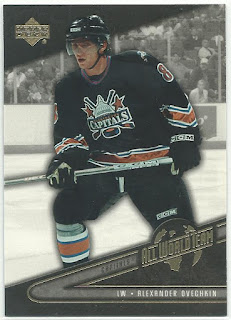 I bought this at a card store in Connecticut the year it was released. There was a box of random inserts and parallels - some had price stickers, some didn't. This one didn't, and either it hadn't been listed in Beckett or the store owner didn't look it up because he charged me no more than a dollar. Turns out it's a short print and the first Beckett pricing listed the value at $50. 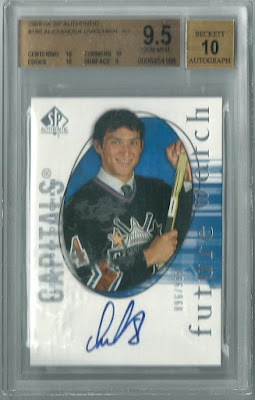 About four years ago I was laser-focused on purchasing high end rookie cards in high grade - such as the LeBron James Topps Chrome RC, Derek Jeter SP RC, and this Future Watch Ovechkin. It was tough to fit this one in my budget, but I made an eBay best offer of $375 and it was accepted. I soon realized why - the case has some serious scratches/smudges on it. Someday I'll send it into Beckett for a reholder.

Out of curiosity I checked eBay for this card immediately after the Capitals won the Stanley Cup. I haven't seen any sales yet, but one seller was asking $1,500 for this card!


Now that the playoffs have ended I should be able to get back on track with Sports Card Tour. I'm determined to finish that project by the end of July so that I can move on to other topics.

Hope you're having a great weekend! Thanks for reading!