Christmas Cards from Fuji and Dennis

It's Christmas Eve and I'm exhausted from my weekend in Connecticut (plus staying up late prepping presents for my little ones) but I wanted to say thank you to Fuji and Dennis for adding me to their 'gift' list this Christmas. 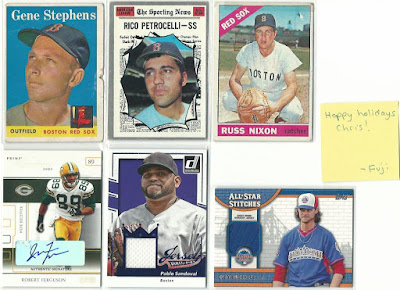 Fuji started a "hit list" of collectors to send cards to, and (almost) cleared it all out this holiday season. This six-pack included three vintage Sox, two relic cards, and a Packer in a pear tree. Lol, that didn't work as well as I'd hoped.

The always generous Dennis of Too Many Verlanders/Mannighams sent a nice box of goodies my way. Lots of Sox here, including relics of Wade Boggs and Dustin Pedroia.. 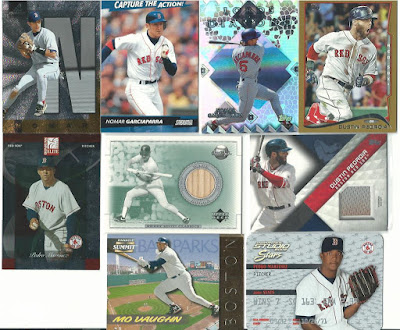 ..and a pair of postcards from Cooperstown. I bought a handful of these the last time I visited the baseball HOF in the summer of '99 - but not Yaz or Teddy Ballgame. 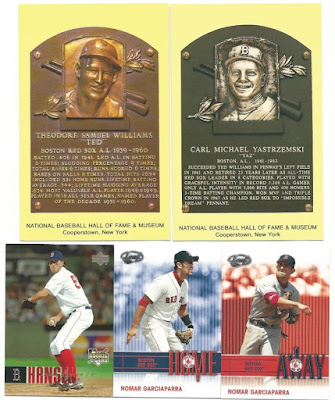 As if that wasn't generous enough..there were over 200 basketball cards in the box. 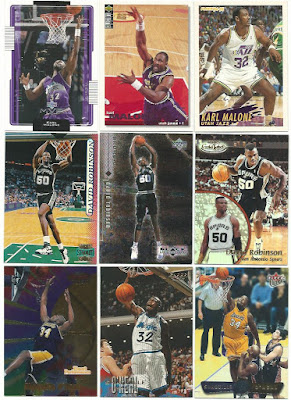 All of them were Hall of Famers from the 1990s-early 2000s: Karl Malone, David Robinson, Shaquille O'Neal... 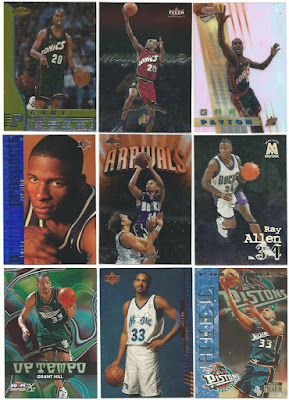 ...Gary Payton, Ray Allen, and Grant Hill. When I was cataloging my cards on TCDB recently, I realized that I'd never even seen the 2000-01 Upper Deck basketball set before. 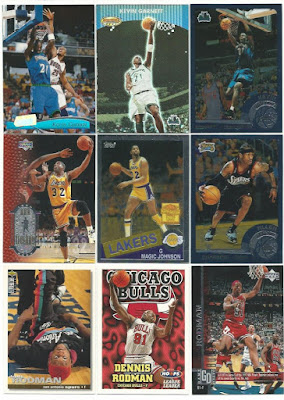 There was also a handful of Kevin Garnett and Magic Johnson cards, a couple Allen Iverson, and some Dennis Rodman. So many cool cards to catalog...

Three years ago I had maybe 100 basketball cards. Now thanks to the blogging community I have nearly 5,000 - and the top seven players listed are all due to contributions from Dennis.

Thanks again for the great cards, guys! Merry Christmas, everyone!


p.s. if you haven't blown out your budget on Black Friday..COMC is having another sale starting tomorrow. I didn't get to the CT card show (long story) so I might spend some cash there instead.

Email ThisBlogThis!Share to TwitterShare to FacebookShare to Pinterest
Labels: blogger gifts, The Chronicles of Fuji, Too Many Manninghams, Too Many Verlanders