By the time you read this, I'll be in New York City celebrating my daughter's 9th birthday (her actual birthday was Tuesday.) I often think of my own childhood though collecting sports cards and memorabilia. Most of my most treasured and longest-lasting memories are related to the hobby. And so when Night Owl wrote of The Reminiscence Bump and Baseball Cards I knew I had to clear my backlog of blog posts and work on a timeline of my own. 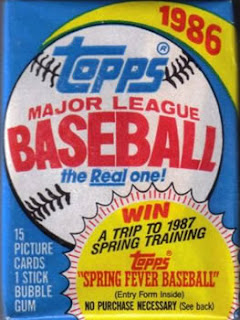 Reading everyone else's nostalgia posts made me think of this song. It's a bit sappy but it seems appropriate (also, the band is named after a hockey term.)

My very first sports card memories are snapshots of seeing a stray 1985 Topps Bob Baumhower in the back of my parents' station wagon, and packs of 1986 Fleer baseball on the bottom shelf at a WaWa. I can't recall any other details. I was five. By the time Mookie Wilson's dribbler rolled past Bill Buckner's glove in October of '86 I had started collecting baseball cards. Topps was the ugliest of the three baseball sets that year, but I don't recall seeing Donruss anywhere - and I can't say for sure that I bought any Fleer.

The one set I clearly remember collecting in 1986 was..Garbage Pail Kids. 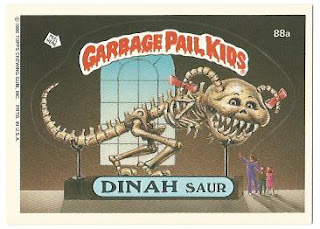 My mom had a home/office cleaning business for most of my life. I'd go with her to these luxurious homes all over southern Connecticut and she'd break her back cleaning every room. Before I was old enough to vacuum or dust around very expensive (and breakable) tchotchkes,  she would pay me five cents a piece for retrieving paper clips, rubber bands, and anything else that could get stuck in a vacuum. Finding five of these earned me enough cash to walk down to the pharmacy on the corner and buy a pack of GPK.

One day - when we weren't working - I had a whole five dollars in my pocket for some reason, and mom took me to WaWa where I purchased twenty packs of Series 4. I laid them all out on the dining room table and opened them while the sky darkened outside. By the time I finished there was a downpour outside. We'd just made it home in time.

Most of the GPKs I bought ended up getting stuck on the walls of my old bedroom, along with Gremlins and Little Shop of Horrors sticker-cards. My nephew has been fascinated by this for most of his life. We managed to salvage a full sticker last year: 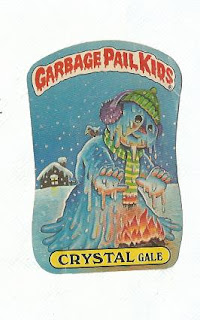 I began to understand the habits and nuances of card collecting in 1987. My father was an alcoholic who was hardly ever in my life, but one of the few positive father-son moments I can recall involved the '87 Topps set. We had a dark brown coffee table in our living room that was low and long, sturdy enough that I had a habit of sitting on it as a kid. I sat on one end while my (I struggle to call him) dad sorted stacks of '87 Topps into piles by the hundred on the other end. This is when I learned how to sort cards into numerical order and make a checklist of needed cards. I don't remember what happened to the unfinished set. I was seven.

Around this time I was learning about baseball, mostly from my brother*. He was much more knowledgeable about the game and the players than my father was.

*My siblings and I have a different father but we never acknowledged this when I was growing up.

In 1987 he was 26 and living in his own house in New Haven. On his dresser was a thick 3-ring baseball card album. Each page had the same team (the Yankees were first) but other than that, the placement appeared to be random. 1988 was the year that sports became my central focus in life. I was reading every baseball book I could get my hands on, waking up to SportsCenter every morning, and buying baseball cards in bulk. Honestly I could write an entire post about '88 alone.

My mom bought me a Panini Sticker album at the grocery store. Like Garbage Pail Kids, packs were just 25 cents. 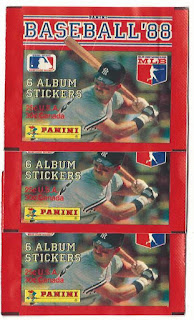 I wrote about these in detail last year. Last night I opened the box I bought from Kruk cards. The glue that sealed these packs 30 years ago had dried out so much that the tops were already cracked open. All I had to do was squeeze one end and the stickers popped out.

Of course there were hundreds of 1988 Topps baseball cards in my house, but I also had stacks of Donruss and Score. Fleer was hard to find for some reason. It was also the nicest of the four big baseball sets (not to be confused with the Big Baseball set, which was crap..but I still bought 'em.) I also had some oddballs - thanks to toy stores and the Hygrade collector's album bought for me at the variety store next to my grandma's house. 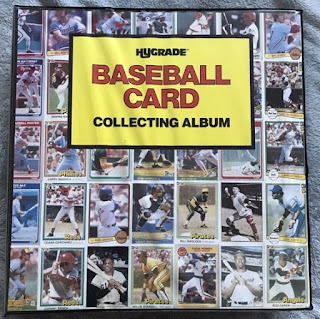 In my eighth year of existence, my collecting interests had branched out beyond baseball cards. Football cards caught my eye before I had ever watched a game. I often asked mom to stop into a WaWa for a cello pack of Topps cards. That Christmas she bought me the full factory set. I opened it, of course. There were so many things to collect in 1988. A month after my birthday I was starting second grade with baseball card folders in my backpack. My friends and I often traded cards in and out of school - especially my best friend at time time who had vending boxes of early '80s sets in his closet. They might have been his dad's though, he had to ask for permission to pull them out.

My toy box was filled with dinosaurs, Teenage Mutant Ninja Turtles..and as many Starting Lineup figures as I could get my hands on. I wrote a post about my SLU collection two years ago. Kenner could not have released these at a more perfect time for me - and a worse time for my mom. 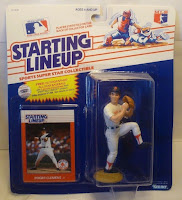 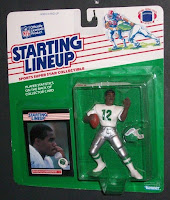 We were always struggling to make ends meet, thanks to my worthless father. I didn't understand this at the time, I was eight. All I knew was that the Toys R' Us/Ames/Bradlees had racks and racks of these toys and I was never satisfied with just one.


1989 wasn't quite as memorable for me. I still collected Starting Lineup Figures, Panini stickers, and sports cards, but not Garbage Pail Kids. Either I outgrew them or I had to make room in my(mom's) budget, or both. The 1989 Topps set was one of my least favorite of all-time. Flagship football was just as bland. The two most valuable sets that year - 1989 Upper Deck baseball and 1989 Score football - were out of my reach. One kid I barely knew (I think his name was Zeke?) had a shoebox of '89 Score football singles. Not sure if he had any of the big rookies though. My most vivid card collecting memories in '89 involved buying packs of Pro Set at the store near my Grandma's. She'd give me a dollar every time I'd visit and I'd run right out and spend it..then I'd return and pay little attention to her as I sorted through my new cards.


I found new ways to play with my cards that year. While my sister* babysat me at her apartment I would spread out all of my '89 Donruss cards on her floor, sort them by team, and then "trade" players so that a lineup would look like this:

I doubt my sister enjoyed seeing 26 rows of baseball cards on her bedroom floor, but for me this was like a precursor to fantasy baseball - or a sports video game years before roster customization.

*again, not my real sister..refer to my sibling note above


This was around the time that I started seeing vintage baseball cards at my LCS (there were five card shops in town when I was a kid) By my ninth birthday I had started saving up my allowance to buy a (now) fifty year-old card of a baseball legend...


If you're a baseball fan, check out this Family Feud-style contest from Josh at Royals and Randoms it's a fun survey about baseball that will only take a couple minutes to complete.

Hope you all have a great weekend!

Email ThisBlogThis!Share to TwitterShare to FacebookShare to Pinterest
Labels: buying back my childhood, childhood memories