Thank you all for your thoughtful answers to my Five Questions survey! It was a great way to learn about your collecting habits and preferences. Nearly all of you answered question five the same way -- that is you've given me license to expand into non-sports topics here on this blog. So let's do that now... 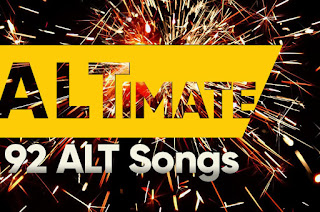 My local radio station ALT 92.3 is doing an "Obligatory End Of Year Countdown" of the 92 best alt-rock songs of all-time. This countdown will run from Christmas Day to New Year's Day and it's supposedly determined by fan vote.

I'm always skeptical of the influence a fan/listener/reader has on an online poll, especially with this station. Earlier this year they ran a "Control-ALT-Delete" promotion insisting that you can not only ask them to play a song you like.. but you can text them to stop playing a song you don't want to hear. This led them to play a lot more Imagine Dragons tracks, Red Hot Chili Peppers, and this friggin' song every friggin' morning.

ALT is a fairly new station, so I have no idea which tracks they will choose as the top 92 Alternative Songs of All-Time. But I've got a few guesses, including number one:

That's not to say that "Smells Like Teen Spirit" is the best song ever, or my favorite song ever..it's just the safest bet to be chosen number one in the countdown.

What song will come in second is anyone's guess -- your guess.

Guess which song will be #2 on the countdown and win a mix CD. I'm making one for my mom and best friend, so I'll be happy to make another. If your guess is correct, you can e-mail me with up to five requests for songs/artists you'd like and I'll fill in the rest with tracks I think you'll like.

If more than one guess is correct I'll randomize the correct guesses to determine a winner. If no one correctly guesses the second best song, the winner will be determined by whose guess ranked highest (i.e. closest to #2) on the countdown.

If you don't use CDs anymore, guess anyway. I can send a PWE with some cards instead, if you prefer. Anyone who commented on my 200th post and has a US mailing address is eligible for this contest. Contest ends when ALT 92.3's countdown begins, so submit your guess by Christmas Eve.