The Allure of Black Friday sales

Have you done any Black Friday shopping? I purchased and received my order from Dave and Adam's in a total of four days (take that, COMC!) The football packs were fun, but the main attraction was the box of 2019-20 Upper Deck Allure hockey: 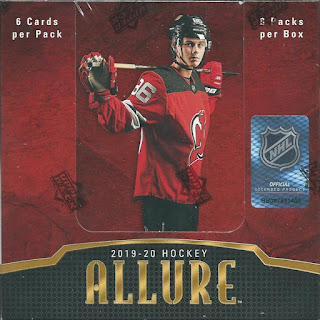 This is a set I've had my eye on since Brian offered up some singles for Free Stuff Friday way back in April. Only 48 cards in this box, which works out to about $1.50 per card. Let's see that shiny! 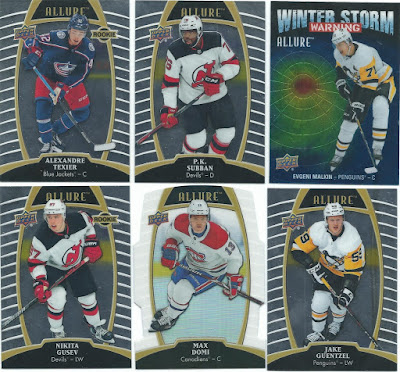 A pair of Devils is a nice start, though most collectors would prefer the pair of Penguins. Max Domi is a white rainbow die-cut. 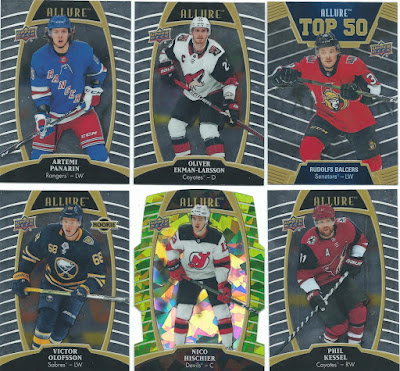 Hell yeah! The lowest-numbered insert in this box happens to be a Green Quartz parallel of Devils star Nico Hischier. I've had some great luck with PC players so far in this order.
Pack #3: 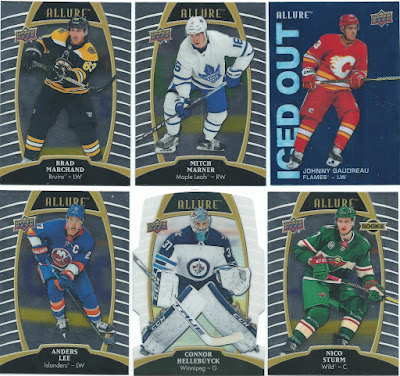 A "Johnny Hockey" insert and a Connor Hellebuyck white rainbow die-cut. There appears to be one parallel and one insert in every pack. Let's see if that holds throughout the box.
Pack #4: 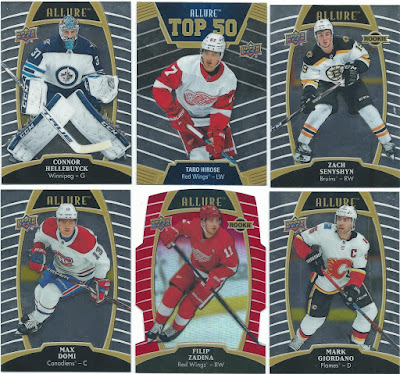 Indeed it does, and both are Red Wings. I really like the color-matching Filip Zadina rookie parallel. Hellebuyck is back, in base form. I came up with a little jeering toward him which would work a lot better if he hadn't just won the Vezina: "Hellebuyck, you hella-suck!"
Pack #5: 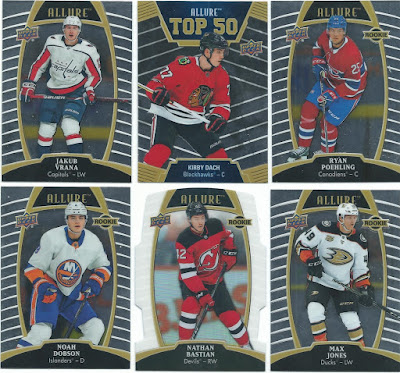 Another Devils parallel, though Nathan Bastian is kind of a fringe prospect at this point. Dobson and Vrana are already starting to curl so I had to order some emergency top loaders lol. 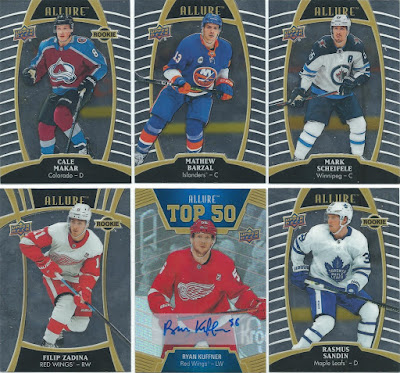 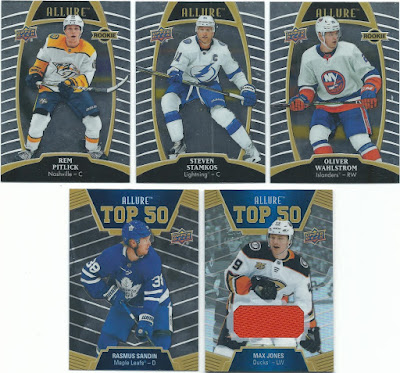 Only five cards in this pack due to the thickness of the Max Jones relic. Nice orange swatch for the Orange County team. 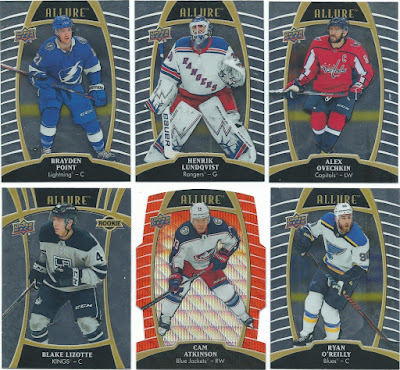 And we close out the box with some future Hall of Famers, another short-printed RC, and an Orange Slice parallel of Connecticut Cam. This beauty is serial numbered to 199. Nice! 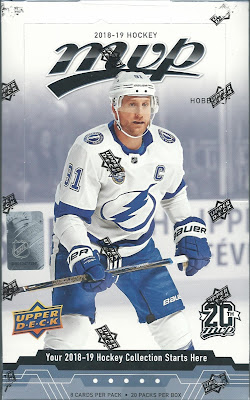 At $25 a box this works out to $1.05 per pack. It's increasingly rare to find decent cards at that price.

MVP is pretty basic stuff, the design doesn't change much and the top rookies are only attainable via redemption. But I really don't have too much hockey card tradebait so this will give me a little boost for TCDB. [I ended up posting about half of the cards FT.]
Also, the big draw is the 20th Anniversary stamped buybacks. I haven't even seen the Peter Worrell card anywhere so this purchase was like buying a lottery ticket for a huge PC need.
I won't scan every pack, but here's a look at the base card design: 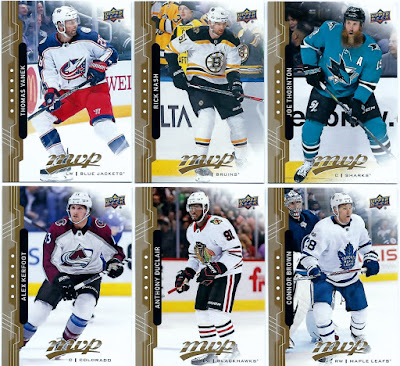 Some short-term stops, my first cards of Kerfoot and Brown, and Joe Thornton's beard. I really hope he wins a Stanley Cup so he can finally remove that monster from his face. He signed with the Leafs though, so it doesn't look like that's happening :/ 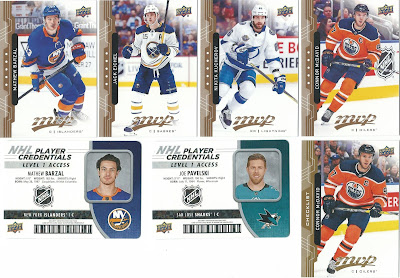 There are 50 short prints in the MVP set, and this box contained six veterans and six RCs. Notice the Connor McDavid SP has the same photo as the checklist (which is not an SP.) The Player Credentials cards are a neat concept, but I feel like they could be a little more realistic - and colorful. 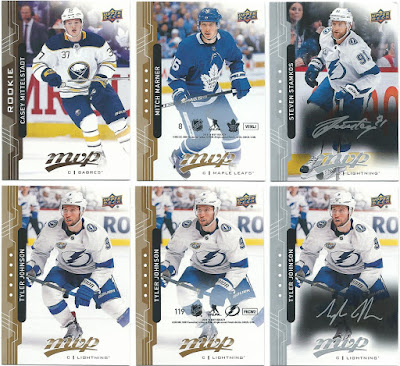 Three types of Tyler Johnson - including the base, puzzle back, and silver script parallels. Mittelstadt is the only rookie SP in my keeper pile. 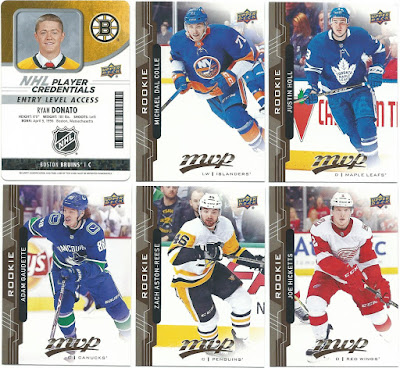 The rest of my rookies, including a Ryan Donato Credentials insert. I think the vertical orientation works better for these.

These 20th Anniversary silver script parallels inserts are really sharp. My wife and I both collected 1998-99 MVP and I have fond memories of hoarding packs at the Newbury Comics near Cape Cod. It's neat to see newer teams like the Golden Knights on this design. I'd love to add more of these to my collection. 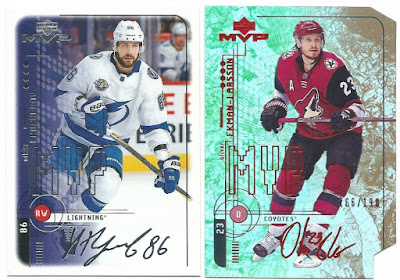 Nikita Kucherov was the best of the four players I pulled. The Oliver Ekman-Larsson next to it is a Colors and Contours insert numbered to 198. I do not like the look of these, or the snipped-off edges.

I was not expecting to pull a 20th Anniversary buyback since there are only 20 copies of 220 cards. That means only 4,400 of these exist in total. The odds that I'd pull a Peter Worrell were very, very slim.

I did pull a buyback! 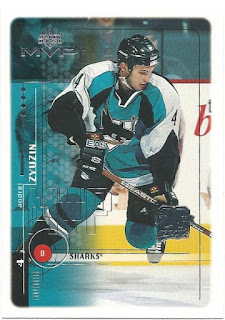 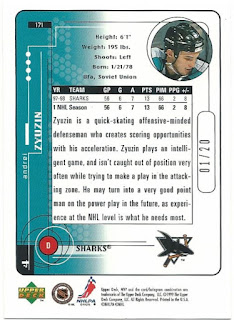 Not the one I wanted, but that's okay. Andrei Zyuzin played for six different NHL teams including the Devils over his ten-year career. New Jersey has seen so many players with Z-names come through the Garden State, including Zach Parise, Danius Zubrus, Valeri Zelepukin, Peter Zezel, and current Devils Travis Zajac and Pavel Zacha.

I'm surprised that the lowest-numbered parallel came from the lowest-priced set (not counting that free 2015 Score football pack.) While I didn't pull any "sick hitz" from this D&A order it was a lot of fun to open packs again, something that I haven't done nearly enough this year.