One PWE arrived in today's mail. Two more are on the way, and I should have my order(s) from COMC sometime next week.

I made a trade with TCDB user nwcardsupplies, sending five cards including a Willie Mays insert to the the northwest in exchange for six cards. (That reminds me, I should try to pick up some more card supplies.) These three Bunt singles leave me just three rookies away from a complete 200-card set. I'll probably try to upgrade a few others as a previous trader sent me some scratched singles.

Jose Abreu is a finalist for the AL MVP award [edit: he won], and the White Sox are an exciting young team on the rise. That's why it was so disappointing to see the Pale Hose hire Tony LaRussa when they already had a perfectly good manager in Rick Renteria. Who knows why they're dusting off LaRussa now. He's 76, has a DUI charge hanging over him, and hasn't managed the White Sox since before Abreu was born.

Trevor Bauer won the NL Cy Young award, which is significant because - as I mentioned in my All-Time Teams series - the Reds have had amazingly bad pitching over the years. Bauer is the first Cy winner in team history, which counts for something even though a) he pitched fewer innings and strikeouts than Rob Dibble did in 1990 (zero Cy Young votes for Dibs that year) and b) is a complete tool expected to sign elsewhere this winter.

The next two cards in the trade with nwcardsupplies closed the book on their respective All-Time team sets. 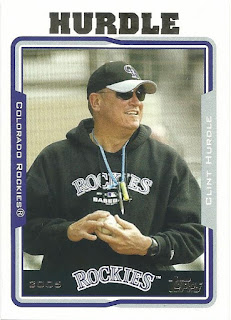 Clint Hurdle's resume isn't nearly as impressive as LaRussa's, but he is the winningest skipper in Rockies history. 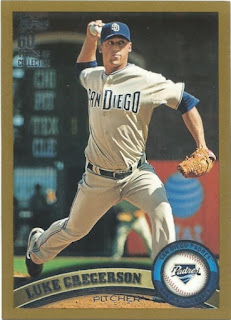 Luke Gregerson earned a spot in the Padres' bullpen on my All-Time Team. He doesn't have a lot of San Diego cards and I was happy to acquire a color-matching gold parallel. However the top right corner is dinged. 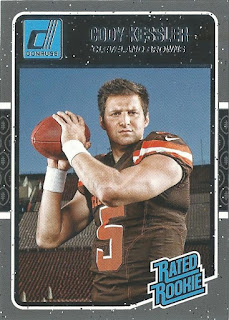 The sixth card in the trade was this Cody Kessler 2016 Donruss rookie card. I'm still not close to completing this set, but I'm chipping away one card at a time. One topic I've wanted to explore on this blog is quarterbacks - I'd like to know a better way to compare QBs from the 1970s and '80s to recent passers. Is Phillip Rivers better than Dan Fouts, or does he just throw more because it's a different game? Should Ken Anderson be in the Hall of Fame? Was he better than Boomer Esiason?

That led me to an idea for a future mini-collection of quarterback cards. It will either be comprised of each franchise's greatest-ever signal-callers or their most prominent starters from 1980-2000. Either way, Cody Kessler won't make the cut.

My creative streak is still ongoing. I've been writing sports things, including the NHL All-Time Teams posts, and non-sports things. There's a short story idea that's been rattling around in my head for a while, and I recently thought of a beginning and an end. But once I fleshed it out a little more with some decent detail, it got a little longer than I'd planned - and it doesn't appear to be leading to where I thought it would. Now I'm not sure what I'm going to do with it. 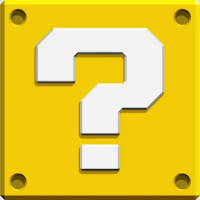 Anyway, it seems as though the blogs are kind of stagnant right now so I plan to trim down my blogroll a bit and focus on folks who post fairly frequently. I'm turning off TCDB trading for a while so that I can use that time for commenting here, and I'm going to post things that probably won't get a lot of views or comments. But that's okay.