Spring Training has been suspended but the All-Time Teams series continues. Here's the All-Time roster for the San Diego Padres: 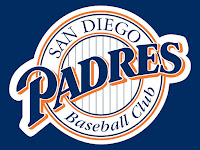 Leading off for the Padres.. the Second Baseman.. Bip Roberts

Leon Joseph Roberts played seven seasons for San Diego, where he slashed a respectable .298/.361/.387. "Bip" batted over .300 in six seasons, including an All-Star campaign for the Reds in 1992. He stole 20 or more bases in seven consecutive seasons from 1989-1995 and his 148 steals for the Padres is one ahead of Ozzie Smith for fourth in franchise history. Roberts has the Pads' third-highest career batting average and his career WAR with the team is tops among San Diego second baseman.

The best hitter since Ted Williams and the best player in Padres history, Tony Gwynn is the franchise standard-bearer in several categories including career WAR, batting average, hits, runs scored, total bases, stolen bases, and RBI. "Mr. Padre" won eight batting titles, five Gold Gloves, seven Silver Sluggers, and earned fifteen All-Star selections. A first-ballot Hall of Famer in 2007, Gwynn finished third in NL MVP voting in 1984, leading the Padres to their first World Series appearance. He batted an incredible .394 in the strike-shortened season of 1994, collected a career-high 119 RBI in 1997, and helped the Friars win their second NL pennant in 1998.

Adrian Gonzalez had no problem producing prolific power numbers in pitcher-friendly Petco Park. The five-time All-Star posted all four of his 30+ home runs seasons with the Padres, including a 40-homer campaign in 2009. Gonzalez won four Gold Gloves and two Silver Sluggers in his career. He compiled seven seasons of 100+ RBI, including an NL-best 116 for the Dodgers in 2014. The first overall pick in the 2000 draft is third in Padres annals with 20.4 career WAR, second in home runs with 161, and fourth in total bases with 1,529.

The first player depicted with a Padres cap on his Hall of Fame plaque, Dave Winfield played one more season and 55 more games for the Yankees but had little chance of making their all-time outfield. Winfield made twelve All-Star teams, won seven Gold Gloves as a right fielder, and earned six Silver Slugger awards in his 22-year career. He ranks second among Padres in career WAR, total bases, runs scored, and runs batted in. His career RBI total of 1,833 is 18th-highest in history.

Brian Giles has the highest slugging percentage, OPS, and OPS+ in Pirates history. Though he was much more productive in Pittsburgh, his six-plus seasons in San Diego were strong enough to earn a starting spot on this roster. The Granite Hills High School alum ranks fourth among Friars in runs scored, sixth in hits, sixth in on-base percentage, and third in doubles. Giles was primarily a right fielder but played all three outfield positions in his 15-year career.

Phil Nevin was the first overall pick in the 1992 draft. His career got off to a slower start than the sixth pick in that draft, but he excelled in San Diego. From 1999 to 2005 Nevin slammed 156 home runs (third in team history), collected 573 RBI (also third among Padres) and slugged .503 (the Friars' fourth-highest career mark.) Nevin was named to the NL All-Star team in 2001 - his second consecutive season with over 30 home runs, over 100 RBI, a batting average over .300, and an OPS over .900.

A big, strong, powerful guy, Ryan Klesko hit 139 home runs in just under 800 games for the Braves and 133 home runs in just over 800 games for the Padres. He hit 20 or more home runs eight times (four for each team) including two 30+ home run seasons (one with each team.) Klesko also earned an All-Star spot in 2001, setting career highs in runs scored and runs batted in. He ranks fifth on the Padres' all-time list in on-base percentage, slugging, and RBI.

Terry Kennedy played over 140 games and hit 10 or more home runs in six consecutive seasons. The four-time All-Star is tenth among Padres in games played and ninth in hits despite a short six-year tenure with the team. Kennedy received NL MVP votes in 1982 and 1983, won a Silver Slugger award in '83, and helped the Padres win the NL pennant in 1984. Mike Lawson would have earned the starting spot if he were an actual Padres catcher instead of a character from the TV show Pitch.

Khalil Greene played just five full seasons for the Padres, posting double-digit home run totals each year. The 2004 NL Rookie of the Year runner-up hit a career-high 27 long balls to go with a career-high 97 RBI in 2007. His slash line of .248/.304/.427 for the franchise is less than ideal for an All-Time starter. Garry Templeton seemed like the obvious choice here, as he's first among Friars in defensive WAR and second in hits. However, the man acquired for Ozzie Smith slashed a meager .252/.293/.339 for a 77 OPS+ over his ten seasons with the team.

The Starting Pitcher for the Padres.. Jake Peavy


Now let's take a look at the Padres' bench and bullpen:

Santiago won four Silver Sluggers, three Gold Gloves, and the 1987 NL Rookie of the Year award as a Padre but his sub-.300 OBP cost him a starting spot. Colbert was San Diego's first superstar and remains the franchise leader in career home runs with 163. Headley is sixth among Padres in career WAR, with much of that coming in a standout 2012 season. Richards places top-5 among Padres hitters in WAR, batting average, runs scored, hits, and stolen bases. Venable hit 22 doubles, 22 home runs, and stole 22 bases in 2013. The dearth of eligible outfielders for this franchise is baffling.

Lefferts made the second-most appearances of any Padres pitcher, including a major-league leading 83 in 1986. Gregerson is third in team history with 363 appearances and averaged 9.1 strikeouts per 9 innings over five seasons with the Friars. Linebrink posted a 145 ERA+ over his half-decade in San Diego. Davis made two All-Star teams and won the NL Cy Young award in 1989 after leading the majors with 44 saves. Bell made three consecutive All-Star squads and saved 134 games for the Padres - second in team history. Hoffman, the first closer to earn 600 saves, was inducted into Cooperstown in 2018. The seven-time All-Star is first among all Padres pitchers with 26.0 career WAR and second all-time in saves with 601.

I guess there's no reason to rush the rest of this series but I'd still like to wrap it up by the end of March. The San Francisco Giants are next.

Thanks for reading, and take care out there!