I'm hoping to have the Washington Nationals All-Time Team posted tomorrow. This young stud didn't qualify, but he's already made his mark on the franchise:

The Juan Soto Atomic Refractor you see here is the only recent card I received in a TCDB trade with Base Card Hero. I sent Ryan 21 dupes from 1992 Fleer Ultra and three from 2016 Topps. 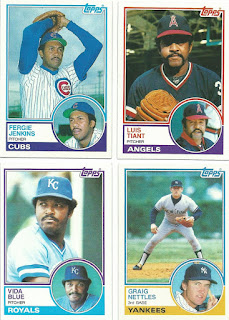 The cards I asked for (besides the Soto) were 1983 Topps singles. These were the biggest names. Fergie might be my favorite of the whole lot, it's really sharp and the colors pop. 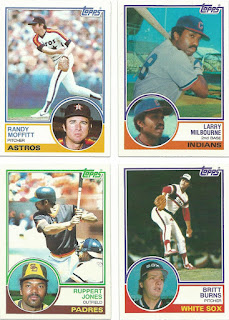 Some lesser-known players here, though you may know Randy Moffitt as the younger brother of Billie Jean King. Larry Milbourne is interesting to me; while I was researching the Mariners All-Time Team I discovered that he's the most accomplished major leaguer from my wife's alma mater. 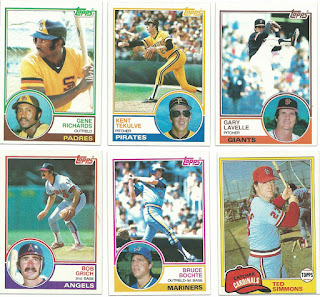 These cards were selected with an eye toward the All-Time Teams franken-set (more details next week). Originally I had asked for a 1983 Topps Simmons but Ryan no longer had that card. I asked for the '81 as a replacement, and any of the next three cards as a backup. 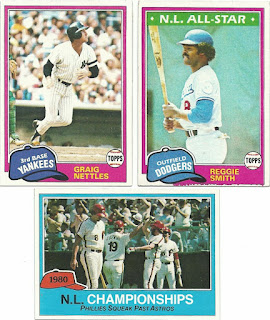 He sent them all, since the Simmons is off-center and the Smith is bleeding pink ink. Nettles and the Phillies are clean. Ryan, thanks for the trade!

I sent another five dupes from 1992 Fleer Ultra baseball along with ten dupes from three other sports to TCDB user Sheepboy in exchange for 14 cards.

A couple set fillers here. I'm down to 27 needs for the 2018 Stadium Club set, and that should be below 20 once my Cardbarrel order arrives. The iconic Craig Ehlo brings me to 70% completion of the 1993-94 Ultra set.


I also acquired a couple of upgrades for my 1986 Topps football set. They're plentiful and affordable enough for me to request in trades without needing to know what condition they're in: 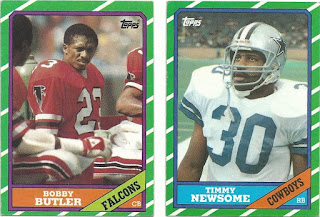 Bobby Butler seems to be questioning this strategy, but most of my '86 Falcons cards are a mess. 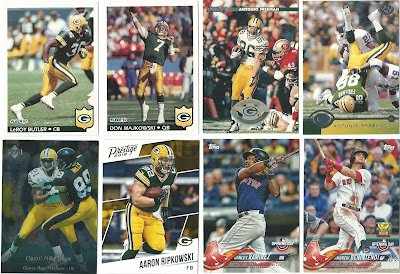 I also added some team favorites to the trade. Thought I had the Freeman Leaf and the Newsome but it turns out I had other versions of each. This is my first Aaron Ripkowski card; he was the Packers' fullback after fan favorite John Kuhn and before Dan Vitale (who has the same name as my nephews' father.)

When a PWE arrived yesterday I assumed it was the third and final TCDB trade, but it was a care package from Jon, originator of the Free Stuff Friday trend (yes, it's a trend now!)

I claimed a couple cards here and there, including some Packers:

According to his note, seven of the nine cards in the nine-pocket page were claims. I think these color-matching parallels pre-date Free Stuff Friday but I can't be certain: 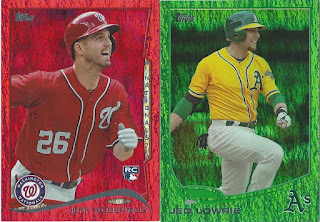 Jon has sent me tons of basketball over the years, and he knows I like to collect Milwaukee Bucks (I sure hope they're able to complete this season because I'd love to see a Bucks-Lakers final.) 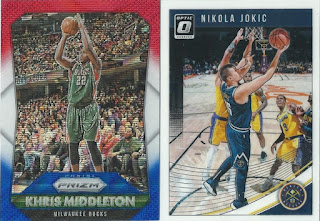 He also knows I have very few Nikola Jokic cards. As in.. three. This is now my fourth 'Joker.' 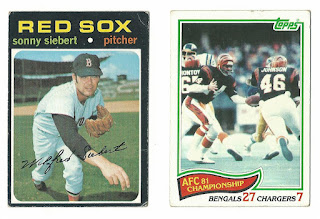 Bringing it back to vintage-ish cards here including a Sonny Siebert high number(!) and a card commemorating the 1981 AFC title game. Why did I claim this card? Because I am fascinated with the story behind it. The San Diego Chargers advanced by defeating the Dolphins in Miami the week prior. It was 76 degrees at the Orange Bowl, with 80% humidity in January. At the end of the Chargers' OT victory Kellen Winslow looked like a boxer who had just gone 12 rounds with Muhammad Ali:

San Diego's reward for surviving this epic clash in brutally hot weather? A trip to Cincinnati - where the weather was historically cold. Football can be so cruel.

Jon, thanks for the great cards! I hope I'm able to return the favor soon.