Eighty percent of success is showing up. And eighty percent of this All-Time Team was filled by determining which players met the minimum standard of seasons played. Here's the Tampa Bay Rays roster: 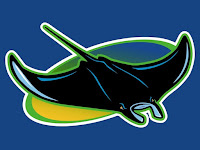 Leading off for the Rays.. the Left Fielder.. Carl Crawford

Carl Crawford is the Rays' all-time leader in career hits, batting average, stolen bases, and triples. The four-time All-Star is second in several categories including WAR, runs scored, runs created, extra base hits, total bases, and games played. Crawford won a Gold Glove and a Silver Slugger in 2010, his last season in Tampa. He led the league in stolen bases and triples four times, including a major-league leading 19 three-base hits in 2004. Crawford batted .345 in the 2008 ALCS against Boston, helping the Rays win their first pennant.

Ben Zobrist has played every position except catcher in his 14-year career. The three-time All-Star finished eighth in AL MVP voting in 2009 (his first season as a full-time player) after posting career highs in home runs, runs batted in, slugging percentage, and OPS+. Zobrist is third on Tampa Bay's all-time list in games played, runs scored, hits, total bases, stolen bases, RBI, and WAR. He ranks second in Rays history with 229 doubles and a 29.0 oWAR. A key member of the 2008 American League champion Rays, Zobrist won back-to-back World Series rings with the Royals in 2015 and the Cubs in 2016.

The American League's Rookie of the Year in 2008, Evan Longoria is the Rays' all-time leader in over two dozen categories - including WAR, home runs, RBI, total bases, and games played. The three-time All-Star and three-time Gold Glove recipient won a Silver Slugger in 2009 after posting his first of three consecutive 7+ WAR seasons. "Longo" hit over 30 homers in a season four times and collected 300+ total bases three times. His 12th-inning walk-off squeaker on the last day of the 2011 season won the wild card for Tampa, eliminating the "chicken and beer" Red Sox from playoff contention.

Fred McGriff played parts of five seasons in Atlanta, five in Toronto, and five for his hometown team. Tampa's career leader in on-base and slugging, McGriff was an original Devil Ray before a 2001 trade to the Cubs. He closed out his Hall of Fame-caliber career with the Rays in 2004. The "Crime Dog" is sixth in Rays history with 603 hits, seventh in home runs, RBI, and total bases, and tied for second in batting average. McGriff's 493 career home runs ties him with Lou Gehrig for the 11th-highest total all-time among first basemen.

Carlos Pena had a monster season for the Devil Rays in 2007, setting single-season franchise records for offensive WAR, OPS, home runs, and RBI. He earned a Silver Slugger that season, the first of three straight 30+ homer, 100+ RBI campaigns. Pena led the AL with 39 home runs in 2009, earning his only All-Star appearance. Pena's batting average dipped throughout his Tampa tenure; his career .230 mark is the second-lowest among qualifying players. However his 163 home runs for the Rays is the second-highest total in team history.

Matt Joyce ranks among the Rays' top-ten in career home runs, total bases, RBI, and OPS. His career batting average for the franchise is significantly lower than the only other right field option, Randy Winn. However their on-base percentages are equal and Joyce produced more power. An All-Star in 2011, Joyce is fourth in franchise history with a 118 OPS+.

Drafted second overall in 2002, the former B.J. Upton stole over 40 bases in three consecutive seasons from 2008-2010. Originally a shortstop, Upton was converted to a center fielder in 2007 - a year in which he batted .300 for the first (and only) time. Upton hit 20+ home runs in a season four times, and his Tampa total of 118 round-trippers is fourth in Rays history. Upton also ranks fourth among Rays in games played, hits, runs scored, runs created, total bases, and doubles. He's second to Carl Crawford among Tampa Bay base-stealers with 232.

Julio Lugo is the only shortstop who played the minimum four years for the Rays/Devil Rays. Though he gets the start by default he did put up solid numbers during his tenure in Tampa. Lugo's .287 batting average is tied for fifth-highest in team history, and his .350 on-base percentage is also fifth in franchise annals. Lugo won a World Series with the Red Sox in 2007, batting .375 against Colorado in the Fall Classic.

The Starting Pitcher for the Rays.. David Price

The first Cy Young award winner in Rays history, David Price earned the honor in 2012 after leading the league in wins and ERA. Price finished second in Cy Young voting in 2010 and 2015, made four All-Star teams, and led the majors with 271 strikeouts in 2014. The first overall pick in the 2007 draft is first among Tampa pitchers in WAR, ERA, and WHIP. Though his postseason struggles are well-documented, Price pitched brilliantly in Tampa's 2008 run to the World Series and won a ring with the Red Sox ten years later.

Now let's take a look at the Rays' bench and bullpen:

Navarro was an All-Star in 2008, and his OPS+ of 73 with the Rays barely beats Flaherty's 69. Finding a backup infielder for Tampa was a tough task: Jason Bartlett, Logan Forsythe, and Miguel Cairo didn't qualify - and they played more games for the franchise than Cantu. However the only other qualifying infielder was Sean Rodriguez, who batted .228 over 553 games for the Rays. Cantu hit more home runs, collected more RBI, and totaled more total bases than Rodriguez - in 221 fewer games. Kiermaier has won three Gold Gloves and has the fifth-most stolen bases in Rays history. Jennings beat out Randy Winn for the final spot on the bench. I would prefer not to discuss Aubrey Huff.

Snell became the second Rays pitcher to win the Cy Young award in 2018, setting single-season franchise records with a 1.89 ERA, 0.974 WHIP, 21 wins, and a 7.1 WAR. His 129 ERA+ and 10.045 strikeouts per 9 innings are the highest in team history. Archer made two All-Star teams and posted three seasons of over 230 strikeouts from 2015-2017. Shields holds franchise records for wins, strikeouts, starts, innings pitched, complete games, and shutouts. Kazmir made three All-Star teams, led the AL with 239 strikeouts in 2007, and sits third on Tampa's all-time list in WAR, wins, strikeouts per 9 innings, and ERA+.

Balfour posted a 1.54 ERA and 0.891 WHIP for the Rays in 2008. Peralta pitched just four seasons with Tampa but his 296 appearances are one shy of the club record. His 80 appearances in 2013 led the majors. Boxberger led the AL with 41 saves in 2015 and repped the Rays in the All-Star game. McGee, the Rays' career leader in appearances, posted a 2.58 fielding-independent ERA and a 1.017 WHIP over six seasons with the team. Colome made the All-Star team in 2016, led the majors with 47 saves in 2017, and his 95 saves for the Rays are second in team history. Roberto Hernandez is the Rays' record-holder with 101 closeouts, however he only pitched three seasons for Tampa and did not qualify.

Three more All-Time Teams to go. The Texas Rangers are next.