Today's team has won more pennants than any Pennsylvania-based baseball team. Here's the all-time roster for the Pittsburgh Pirates:

Leading off for the Pirates.. the Shortstop.. Honus Wagner

Paul Waner owns the highest career batting average of any player with over 2,000 at-bats for the Pirates. He won NL MVP honors and the first of three batting titles in his sophomore season of 1927. "Big Poison" slashed .340/.407/.490 over his 15 years with Pittsburgh. He led the league in runs scored twice, triples twice, and doubles twice - including an incredible 62 in 1932. Waner is the Pirates' career leader with 558 doubles and 1,681 runs created. He would surely start in right field if not for the presence of the next player in this lineup.

An icon to baseball fans everywhere - especially in Latin America - Roberto Clemente won four batting titles, twelve Gold Gloves, and two World Series in his Hall of Fame career. A 15-time All-Star, Clemente was named NL MVP in 1966 after setting career highs in home runs, total bases, and RBI. The Pirates' all-time leader in total bases finished the 1972 season with exactly 3,000 career hits (also a team record) before his tragic death at the end of that year.

Ralph Kiner set the standard for Pittsburgh power hitters over his relatively short career. In just eight seasons with the Pirates, Kiner blasted 301 home runs - the second highest total in team history. The six-time All-Star led the majors in long balls every year from 1947 to 1952, including two seasons of over 50 homers. Kiner's career slugging and OPS averages are second in Pirates history, and he owns team records for single-season slugging percentage, walks, and home runs. Kiner was elected to the Hall of Fame on his 15th try in 1975.

Willie Stargell played more games as a left fielder but Pittsburgh has plenty of outfield options. "Pops" won the NL MVP as a first baseman in 1979, leading the "We Are Family" Pirates to their most recent World Series title. The Hall of Fame slugger finished top-3 in MVP voting every year from 1971-1973, leading the majors in home runs twice. Stargell's 475 home runs, 953 extra-base hits, and 1,540 RBI are the highest career totals in Pirates history. Only Clemente and Wagner played more games in a Pittsburgh uniform. 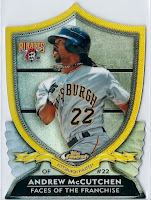 The only active player in this lineup, Andrew McCutchen is currently a starting outfielder for the other Pennsylvania ball club. In his nine seasons with the Pirates, "Cutch" made five All-Star teams, won four Silver Slugger awards, a Gold Glove in 2012, and NL MVP honors in 2013 after leading Pittsburgh back to the playoffs for the first time in twenty years. McCutchen led the team in WAR every year from 2010-2014 and posted eight consecutive seasons of 20 or more home runs - including his last seven in the Steel city.

Pie Traynor places in the Pirates' top ten in several categories including doubles, triples, total bases, runs batted in, runs created, and runs scored. In seventeen seasons with the team Traynor batted .300 or better ten times, collected 100+ RBI seven times, and finished top-10 in MVP voting six times. His 2,416 career hits are tied for fourth in team history and ninth-all time among third baseman. In 1948 Traynor became just the second player at his position to be inducted into the Hall of Fame.

Jason Kendall played more games behind the Pirates plate than anyone in team history. A true 'gamer', Kendall is fifth all-time in games caught; every other catcher in the top 20 played more seasons. The three-time All-Star hit .300 or higher in six of his nine seasons with the Bucs, including three seasons with a batting average at or above .320. An exceptional base runner for a catcher, Kendall stole 20 or more bases in a season three times, and no catcher in 105 years has accumulated more career steals.

If you compare Bill Mazeroski's offensive numbers to George Grantham 's it may appear that I'm breaking my own rule "Don't look at the names, look at the numbers." However Mazeroski's accolades are too numerous to ignore: ten All-Star nods, eight Gold Gloves, the highest career defensive WAR in Pirates history, two World Series victories (including the first walk-off home run in the Fall Classic) and a plaque in Cooperstown. "Maz" may have been a below-average hitter overall but he does have the tenth-most home runs in team history.

The Starting Pitcher for the Pirates.. Babe Adams

Charles Benjamin Adams made the fourth-most starts and the fifth-most appearances of any Pirates pitcher, coming out of the Pittsburgh 'pen 128 times in his 18 years with the team. Despite a meager strikeout total, "Babe" compiled a 50.1 career WAR - the highest total of any Pirate pitcher - thanks to pinpoint control. Four times Adams posted the lowest WHIP and walks per 9 innings in the majors. He won two World Series titles with the Bucs sixteen years apart, in 1909 and 1925.

Now let's take a look at the Pirates' bench and bullpen:

Sanguillen made three All-Star teams and won World Series titles with the Pirates in 1971 and 1979. Beckley collected 2,938 hits and posted 61.3 WAR in his Hall of Fame career. Vaughan had Honus Wagner as a hitting coach and became a Hall of Famer in his own right, slashing .324/.415/.472 over ten years with the Pirates. Clarke was player-manager for four pennant-winners and the 1909 World Champions, batting over .300 eleven times in his Hall of Fame career. "Cobra" won two batting titles, three Gold Gloves, and NL MVP honors in 1978.

Cooper is second among Pittsburgh pitchers in WAR and first in wins. Friend made four All-Star teams and leads the franchise in strikeouts. Phillippe led the league in K:BB ratio five times and compiled the second-best fielding-independent ERA in Pirates history. Leever has the fourth-lowest ERA and the fourth-highest WAR of any Buc hurlers, and his win total is tied with Adams for second in team annals. John Candelaria was the only other starter I considered.

Watson made the third-most relief appearances in Pirates history and made the NL All-Star team in 2014. Guisti finished top-10 in Cy Young voting three times and led the NL with 30 saves for the 1971 World Champion Pirates. Melancon played just four years with Pittsburgh but his 130 saves, 1.80 ERA, and 0.926 WHIP in that time were more than enough to earn a spot. Face was a six-time All-Star and leads the franchise in saves and appearances. "Teke" is second in those categories and his 1,050 career appearances are ninth all-time.


Stay tuned for our next All-Time Team, the St. Louis Cardinals.