Today's All-Time Team is perhaps the most unbalanced roster yet. Here's the Cincinnati Reds:

Leading off for the Reds.. the Second Baseman.. Joe Morgan

Joe Morgan played two more seasons in Houston than in Cincinnati, but his contributions to the Big Red Machine were far more significant. The ten-time All-Star and five-time Gold Glove winner was named NL MVP in both of the Reds' championship seasons of 1975 and 1976. Morgan is second in franchise history with 406 stolen bases and his 689 career swipes are 11th in baseball history.

The major league record-holder for hits, at-bats, and games played, Pete Rose played six positions in his legendary 24-year career. Third base was his third-most frequent position but it seems like the best fit for him on this roster. "Charlie Hustle" sits atop the Reds' all-time leader boards in over a dozen categories including WAR, runs created, and total bases. Taking only his Reds total, the Hit King's 3,358 base hits would rank tenth all-time.

Cincinnati's current first baseman, Joey Votto's .421 career on-base % is the highest in team history - and the highest among active players. The six-time all-star has led the league in OBP seven times, walks five times, and OPS twice. Like Morgan and Rose, Votto has won an NL MVP award (2010). The Canadian slugger is poised to pass Tony Perez for third on the Reds' all-time home run list in 2020.

The only player to win MVP honors in both the AL and NL, Frank Robinson played ten seasons with Cincinnati - four more than he played in Baltimore. The first-ballot Hall of Famer and first black manager in the majors slammed 324 home runs for the Reds before being traded at age 30. As a 20 year-old in 1956, Frank hit 38 home runs en route to winning NL Rookie of the Year honors. His 586 career home runs is tenth all-time.

One of the greatest players of the 1970s, Johnny Bench is the Reds' all-time leader in home runs with 389 - second all-time among catchers and 64th all-time among all players. His 75.2 career WAR is the highest of any catcher ever, and second-best in Reds franchise history. Bench won ten Gold Gloves, two NL MVP awards, World Series MVP honors in 1976, and the 1968 NL Rookie of the Year award. The first-ballot Hall of Famer was named to 14 All-Star teams in his 17-year career.

Six players, six MVPs. George Foster won NL honors in 1977 after leading the majors in home runs (52), RBI (149), and slugging (.613). Far from a one-year wonder, Foster finished second (to Joe Morgan) in MVP voting in 1976 and third in 1981. The five-time all-star slugged .514 over eleven seasons with Cincinnati - tied for fourth on the Reds' career list with Ken Griffey Jr. 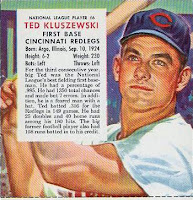 A hulking home run hitter, Ted Kluszewski would fit right in with today's beefy ballplayers. "Klu" was a great fielding first baseman but Votto has been a tick better overall. He gets DH duty over Hall of Famer Tony Perez (who played the role 82 times) based on a superior slash line. Kluszewski's 251 homer runs as a Red includes three straight seasons of 40 or more. The streak of MVPs in this lineup comes to an end as Klu's best finish was runner-up to Willie Mays for the NL award in 1954.

Make it seven out of eight. Hall of Famer Barry Larkin was the NL's MVP in 1995 after leading the Reds back to the playoffs for the first time since their World Series win in 1990. Born and raised in Cincinnati, Larkin won three Gold Gloves and nine Silver Slugger awards for his hometown team. His career hit total of 2,340 trails only Rose in team annals and his 70.4 career WAR is third in Reds history.

One of the most exciting players of the mid-late 1980s, Eric Davis was a five-tool superstar when healthy. In 1987 Davis hit 37 home runs, stole 50 bases, won a Gold Glove, a Silver Slugger.. and finished ninth in MVP voting. Despite playing less than 1,000 games for the Reds, Davis places in the team's all-time top ten in home runs, stolen bases, and OPS+. I initially had Hall of Famer Edd Roush in this slot, but Eric's superior power earned him the nod.

The Starting Pitcher for the Reds.. Noodles Hahn

Noodles Hahn had seven strong seasons for Cincinnati at the turn of the 20th century, posting a cumulative 2.52 ERA highlighted by a 1.77 mark in 1902. Hahn led the league in strikeouts in each of his first three seasons, and his career WAR of 45.4 is first in Reds history. Noodles (whose real name is Frank George Hahn) is such an obscure old-time pitcher that the Trading Card Database lists him as having just three cards - and this isn't one of them.

Now let's take a look at the Reds bench and bullpen:

Lombardi, a Hall of Famer (and 1938 NL MVP) would start on most other All-Time teams. HOFer McPhee is seventh in team history with 52.5 WAR. Roush was a career .323 hitter and won two batting titles. Pinson collected 2,757 career hits. If only the Reds' All-Time Team could trade one of these guys for some starting pitching.

See what I mean? I spent way too much time comparing a group of eight underwhelming starters and cutting half of them. Rijo and Cueto were Cy Young contenders when healthy. Hall of Famer Eppa Rixey and 1939 NL MVP Bucky Walters missed the cut due to their low K:BB rates. Paul Derringer was also considered, but Luque's higher ERA+ won out.

Borbon is the franchise leader in appearances and his 3.28 FIP was more palatable than career saves leader Danny Graves' 4.57. "Nasty Boys" Charlton and Dibble were key to the Reds' 1990 title. Even the greatest hitters of all time would have trouble catching up to Chapman's 105-mph heater.


Stay tuned for our next All-Time Team, the Cleveland Indians.