Today we'll look at the first of two franchises that have competed in both the AL and the NL. Here's the All-Time Team for the Houston Astros: 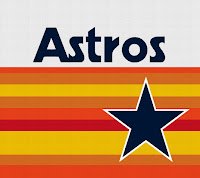 Leading off for the Astros.. the Center Fielder.. Cesar Cedeno

This was a very tough call. Cesar Cedeno pushed Jim Wynn to right field (and eventually to L.A.) in the early 1970s and wins the spot here as well. Cedeno slashed .289/.351/.454 over 12 seasons with the Astros. The four time All-Star won five Gold Gloves and holds the franchise record for career stolen bases with 487. Cedeno's career WAR of 52.8 is slightly less than Wynn's, but his WAR total with the Astros is 49.6 - eight points higher than "The Toy Cannon" and fourth in franchise history.

Houston's all-time greats are highly concentrated at three positions. Luckily, Craig Biggio was versatile enough to accommodate a current superstar. The Hall of Fame second baseman began his career with five seasons behind the plate, where he won the first of five Silver Slugger awards. A seven-time All-Star and four time Gold Glove winner (all at second base) Biggio is second in Astros' annals with 414 stolen bases. His 1,844 runs scored, 3,060 base hits and 1,014 extra base hits are all first in franchise history.

Hall of Famer Jeff Bagwell is the Astros' career leader in home runs, RBI, OPS+, and WAR. His career total of 79.9 is sixth-best among all first basemen. The 1991 NL Rookie of the Year won three Silver Slugger awards and was named NL MVP in 1994. Bagwell also stole his share of bags, racking up two 30/30 seasons and a career total of 202 stolen bases. He led the league in runs scored three times, and his 969 extra-base hits are second in Astros history.

The Astros' career leader in on-base percentage, Lance Berkman was named to more All-Star teams (6) than Jeff Bagwell (4). Berkman succeeded Bagwell at first base and also played all three outfield positions in his 15 year-career, but we'll pencil him in as the DH on this roster. Berkman finished third in MVP voting in 2002 and 2006, when he set career highs in home runs. "Big Puma" led the NL in doubles twice, and posted six seasons of 100+ RBI from 2001-2008. He won a World Series ring (and NL Comeback Player of the Year)  with the Cardinals in 2011.

It might be a stretch to move Craig Biggio behind the plate, but there's no way I could leave Jose Altuve on the bench. The 2017 American League MVP led the league in hits four consecutive seasons, and his career total of 1,568 is already sixth in Astros history. In addition to his three batting titles and five Silver Slugger awards, "Tuve" won a Gold Glove in 2015 and ALCS MVP honors this past season. Jose has accumulated 38.5 career WAR, making him one of four second basemen in the Astros' all-time top ten.

This was another tough call. George Springer has only played five full seasons and his OPS+ as an Astro is equal to Jimmy Wynn's. Springer's slash line of .270/.361/.488 gives him the edge here. In the last three seasons alone, Springer has won two Silver Slugger awards, earned three AL All-Star nods, played in two World Series and earned MVP honors in the 2017 fall classic. He set career highs in 2019 with 39 home runs, 96 RBI, a .292 batting average, and a .591 slugging percentage. He already has an astounding 15 home runs in 50 postseason games.

A star for the Astros well into his thirties, Jose Cruz won two Silver Slugger awards, made two All-Star teams, and finished top ten in NL MVP voting three times - all after his 32nd birthday. Cruz batted .300 or better six times and led the NL in hits with 189 in 1983. He's third in Houston history in hits, games played, plate appearances, stolen bases, and WAR. Cruz's career 54.4 total is 19th all-time among left fielders - one spot ahead of Berkman.

Carlos Correa was the #1 overall pick in 2012 and the AL's Rookie of the Year in 2015. In that season he smashed 22 home runs in 99 games at age 20. Named to the AL All-Star team in 2017, Correa finished that year with career highs in batting average, on-base %, and homers. His career .489 slugging percentage is sixth in Astros history. Correa has hit 20 or more homers in four of his five seasons, including 21 in just 75 games this past season. In addition, he has smacked 11 long balls in 50 postseason games.

I'll be honest, I don't feel great about these choices. I looked at Alex Bregman at third base and decided he hadn't played long enough - even though he already has a higher WAR for Houston than Doug Rader does. I set an unofficial minimum of five seasons - which Correa has and Bregman doesn't. However, Correa has only played 29 more games in that time and totaled only 0.2 more WAR. So it would be fair to ask - where do I draw the line? Five seasons I guess, regardless of total games played. Anyway.. Rader won five Gold Gloves in the 1970s. He hit 20+ home runs three times.

The Starting Pitcher for the Astros.. Nolan Ryan

Nolan Ryan pitched one more season for Houston than he did for the Angels, earning 1,866 of his all-time record 5,714 strikeouts in his nine years as an Astro. In that time, Ryan led the NL in ERA twice, strikeouts twice, and made the All-Star team twice. Ryan's ERA and ERA+ were slightly better in California (though his walk total was a lot higher) and you could argue that he should be anchoring the Angels' All-Time rotation. Call it a gut feeling, or a product of being an 80s kid, but I just think Nolan belongs with a Texas team.

Now let's take a look at the Astros' bench and bullpen:

Ausmus won three Gold Gloves, and while he provided little value at the plate it wasn't significantly less than Alan Ashby. Watson made two All-Star teams in the 1970s. The last thing this team needs is another second baseman, but Bill Doran's WAR total with the Astros was noticeably higher than third basemen Ken Caminiti and Enos Cabell. Wynn had seven seasons of 20+ home runs for the 'Stros.

Oswalt is first among Astros pitchers in WAR, second in strikeouts and wins, and finished in the top five in Cy Young voting five times. Richard compiled back-to-back 300+ strikeout seasons and led the league in FIP twice before suffering a stroke at age 30. Dierker started more games and pitched more innings than anyone in Houston history. Scott led the NL in strikeouts and ERA in his Cy Young award-winning season of 1986.

Forsch is third on Houston's all-time list for appearances and was used as both a starter and reliever. Harris has been lights out in his five Astros seasons, with a WHIP of 0.987 and an ERA+ of 175. Sambito had a sub-2.00 ERA in 1979 and 1981. Lidge had three straight 100+ strikeout seasons including 157 in 2004. Smith saved 216 games and posted a career 2.57 ERA. Wagner is sixth all-time in saves and his rate stats are higher than several Hall of Famers. Every pitcher in this bullpen has made at least one All-Star team.


Stay tuned for our next All-Time Team, the Kansas City Royals.