We're back to one of the "original" MLB franchises. Here's the All-Time Team for the Detroit Tigers: 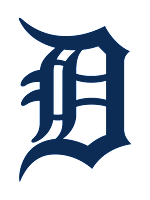 Leading off for the Tigers.. the Center Fielder.. Ty Cobb

Was there any doubt? Ty Cobb has the highest career batting average in major league history and his 4,189 career hits are second all-time. Cobb's career on-base % of .433 is ninth-highest in history, and his 897 stolen bases are fourth all-time. He's also the Tigers' career leader (and ninth in baseball history) with 1,944 RBI. Only Rickey Henderson has scored more runs than the "Georgia Peach", and if you're building an All-Time Team of all teams, one of them has to be your lead-off hitter.

Harry Heilmann won four batting titles and surpassed Cobb as the Tigers' best hitter in the early 1920s. The Hall of Fame right fielder batted .342 in his career - second to Cobb in Tigers history and 12th all-time. Heilmann ranks in the Tigers' all-time top ten in nearly every offensive category and his 72.2 career WAR ranks him just 0.2 behind Derek Jeter. Harry only played left field eight times in his career, but he has to make room for "Mr. Tiger" in this lineup.

At the start of this decade (and before Mike Trout burst onto the scene) Miguel Cabrera was widely regarded as the best hitter in baseball. Despite a steep decline in health and production, Cabrera's .315 lifetime average remains highest among active players. The 11-time all-star and four-time batting champion won the Triple Crown in 2012, earning him the first of back-to-back AL MVP awards. "Miggy" is closing in on 3,000 career hits and 500 career home runs. His 150 OPS+ as a Tiger is third in team history.

The Tigers have had several power-hitting first basemen in their history but none greater than Hank Greenberg. In just nine full seasons (thirteen overall) Greenberg built a Hall of Fame resume with five All-Star nods, two AL MVP awards, and a .313 career batting average. Hank led the league in home runs four times, including 58 in 1938. He drove in an astounding 184 runs the year prior, and totaled 1,274 for his career. No one in Tigers history comes close to Greenberg's career slugging average of .616.

Charlie Gehringer ranks among the game's greatest second basemen in several categories. His 80.7 career WAR puts him just ahead of Lou Whitaker on the Tigers' career list and the all-time list at their position. Gehringer's career RBI total is fourth-best among Tigers and fourth-best among second sackers. Only two players in franchise history have amassed more hits than his 2,839 total. The "Mechanical Man" won the 1937 AL MVP award after leading the league with a .371 batting average.

A model of consistency throughout his 22 years in the Motor City, Al Kaline won a batting title at age 20 in 1955, finishing second in AL MVP voting. He would go on to bat over .300 in eight more seasons, finishing at .297 for his career. The 16 time all-star won ten Gold Gloves in eleven seasons from 1957-1967 and collected 3,007 career hits. Kaline is the Tigers' all-time leader in home runs and games played.

George Kell played for five teams in his 15-year career, including seven seasons with the Tigers. In that time, the Hall of Famer posted a slash line of .325/.391/.433, won a batting title in 1949 with a major league-leading .343 average, and twice led the league in doubles. Six of Kell's ten All-Star selections were awarded while he was a Tiger. I will defer to Dennis for more info on Kell's career.

An above-average hitter and a superior defender, Bill Freehan caught more games than anyone in Tigers history. His career WAR of 44.8 is 17th all-time among catchers, just below Thurman Munson. The 11 time all-star and five time Gold Glove winner hit a career high 25 home runs for the eventual World Champions in 1968. His nice, round total of 200 home runs ranks tenth on the Tigers career list.

The Starting Pitcher for the Tigers.. Justin Verlander

This year's AL Cy Young Award winner, Justin Verlander is aging like a fine wine for the next team on our list. The 36 year-old ace posted a higher ERA+ in 2019 than his 172 total when he won the Cy Young and AL MVP in 2011. A Tiger for over twelve years, Verlander has the second-most strikeouts and the second-highest WAR in franchise history. "JV" was ROY in 2006, helping Detroit win the AL pennant. Verlander has made more starts than any active pitcher (now that CC Sabathia has officially retired) and has an outside chance at 300 wins.

Now let's take a look at the Tigers' bench and bullpen:

Parrish won three Gold Gloves and a World Series with Detroit. Cash has 377 career home runs and a 52 WAR. Whitaker would start on a dozen other teams and has a real shot at joining his double-play partner Trammell in the HOF. Crawford is the all-time leader in triples. Bobby Veach may have had better numbers, but the Tigers would not have won the 1968 World Series without Willie.

Newhouser won back-to-back AL MVP awards and a World Series with the Tigers. Bunning led the AL in strikeouts twice. Lolich once held the record for strikeouts by a left-handed pitcher. Morris won World Series rings with three different teams, including the 1984 Tigers. All but Lolich are Hall of Famers.


Stay tuned for our next All-Time Team, the Houston Astros.