Now that I've resumed regular blogging activities, I'm going to try and schedule these All-Time Teams to post on Wednesdays and Saturdays. Today's team is the Chicago White Sox: 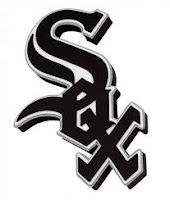 Leading off for the White Sox.. the Shortstop.. Luke Appling

Luke Appling has the most base hits, the most games played, and the highest career WAR in White Sox history. The Hall of Famer was a two-time batting champion and seven-time all-star in the 1930s and 1940s. Appling won a batting title in 1943, then served in World War II for 1944 and most of 1945. It's likely that without the war, Appling would have collected the 251 hits he needed to reach 3,000.

Every baseball fan knows that "Shoeless" Joe Jackson was embroiled in the 1919 Black Sox scandal and - fairly or unfairly - banned for life after the 1920 season. What you might not know is that Jackson is the White Sox' all-time leader in career batting average (.340) and his lifetime mark of .356 is third-best in baseball history. Jackson's six years with the Pale Hose were bested by his six seasons in Cleveland - where he hit .408 as a rookie in 1911.

The first full-time designated hitter inducted into Cooperstown, Frank Thomas was one of the most feared hitters of the 1990s. The "Big Hurt" slashed .307/.427/.568 over 16 seasons with the Sox, earning back-to-back AL MVP awards in 1993 and 1994. Frank's 521 career home runs ties him for 20th on the all-time list with Willie McCovey and Ted Williams. He's also top-20 all-time in on-base %, slugging, and walks.

Paul Konerko ranks 44th all-time in home runs with 439, ahead of legends like Andre Dawson, Cal Ripken, and Mike Piazza. A six time all-star, Konerko is second to Frank Thomas on the White Sox' career home run and RBI list, and second to Luke Appling in games played. His 4,010 total bases are tops in team history. The 2005 ALCS MVP hit five home runs and collected 15 RBI in 12 postseason games for the World Series champions.

Hall of Famer Harold Baines is 34th on baseball's all-time list with 1628 runs batted in, and 46th all-time with 2,866 hits - just seven behind Babe Ruth. Primarily a designated hitter, Harold will have to play right field for this All-Time team. Baines was a six-time all-star and slashed .324/.378/.510 in 31 career playoff games. His 221 home runs for the White Sox are third in team history, behind only Thomas and Konerko.

In between getting punched by Nolan Ryan and hitting a grand slam single, Robin Ventura established himself as one of the best all-around third basemen of the 1990s. A two-time all-star and six-time Gold Glove winner, Ventura had nine seasons of 20+ home runs and three seasons of 100+ RBI. His 39.4 WAR with the White Sox is sixth-highest in franchise history, and his career mark of 56.1 is 19th all-time among third basemen.

Orestes "Minnie" Minoso was much more than just a guy who played in five decades. The nine-time all-star and three-time Gold Glove left fielder finished fourth in AL MVP voting four times. Minoso slashed .304/.397/.468 over a dozen seasons for the south siders, walked much more than he struck out, and led the league in hit by pitches ten times. He received six Hall of Fame votes before collecting the last of his 1,963 career hits in 1976 at age 50.

With Carlton Fisk catching for the Red Sox' All-Time team, Sherm Lollar gets the start for Chicago. Lollar was named to nine All-Star teams (though he never started a single one) and earned three Gold Glove awards. He hit a career-high 22 home runs in 1959 for the pennant-winning White Sox. Lollar's career 104 OPS+ and .264/.357/.402 slash line are higher than his catching counterpart on this roster, Hall of Famer Ray Schalk.

Once again, the White Sox lose a tug-o-war for a legendary player, as Eddie Collins was assigned to the Athletics. Nellie Fox, a Hall of Famer himself, is a strong second choice. The 1959 AL MVP was named to fifteen All-Star teams from 1951-1963, rarely missing a game in that span. Fox batted .300 or better six times, led the league in hits four times, and stands second in Pale Hose history with 2,470 base knocks.

The Starting Pitcher for the White Sox.. Ed Walsh

"Big" Ed Walsh was as unhittable as any pitcher in baseball history. He is the all-time career leader in ERA and fielding-independent ERA, and his career WHIP of just under 1.00 is second all-time. From 1906-1912 Walsh pitched 221 complete games, led the league in innings pitched four times, shutouts three times, and saves five times. A 40-game winner in 1908, Walsh finished second in AL MVP voting twice before his arm gave out in 1912.

Now let's take a look at the White Sox bench and bullpen:


The White Sox have more Hall of Fame designated hitters (two) than outfielders (none). With no true center fielders on the roster (Joe Jackson primarily played corners) I chose five-time Gold Glover Landis over left fielder Bibb Falk, a high-average hitter of the 1920s.

Finally some left-handed relievers! Wood and Wilhelm would drive hitters crazy with the knuckleball. Foulke gets the ninth inning over saves leader Thigpen based on his 166 ERA+ and 0.991 WHIP as a White Sox. Roberto Hernandez would have claimed a spot in the Chicago 'pen, but his services are needed elsewhere.

Stay tuned for our next All-Time Team, the Cincinnati Reds.