I also want to get caught up on cataloging my football card collection to TCDB. So far I'm complete through the year 2000. There aren't a whole lot of cards left to add, since I pretty much stopped collecting football around 2005.

This is kind of off-topic though..other than explaining why I'm doing a one-card post today. I still have two cards from my pre-Black Friday order in the "scan & post" folder, and I planned to include both in this post. But I decided to focus on baseball here and save the other one for the thrilling conclusion of The Basketball card Diaries.

(OMG I'm like Rachel Maddow with the rambling intro here. Shut up and scan, Chris!) 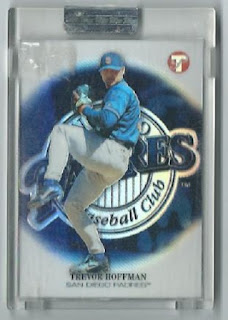 I've mentioned my love for 2002 Topps Pristine on this blog before. During the Black Friday sales I had a handful of base/parallel cards on my watch list. All are Hall of Famers. The only one I purchased (so far) is this Trevor Hoffman uncirculated refractor, serial #d to 149.

When shopping for singles from sets I love but don't plan to complete, I often hit the ol' 'sort by lowest' tab and see what comes up. There wasn't another HOF refractor lower than this Hoffman, which set me back just $1.85. As you can see, the case is scratched up and has some sticker residue. I've kept my other uncirculated cards sealed, but when I got this card in-hand I knew what I had to do.. 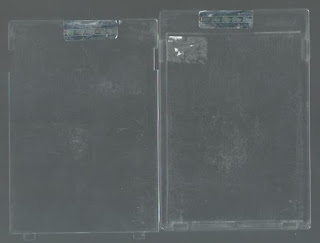 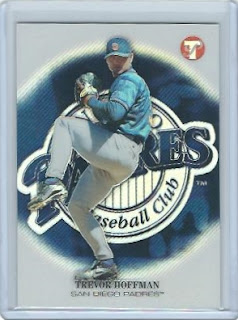 That little notch on the side was a bit tricky, but I got him out of the scratchy plastic prison and into a shiny new top loader.

I didn't see Hoffman pitch a whole lot during his career, but he was a guy I rooted for (especially in 1998) and appreciated. He waited a couple years to get into Cooperstown but was elected in last year's jumbo-sized class of six players.

This year another closer is certain to join him. Mariano Rivera is the only slam-dunk no-brainer on the 2019 ballot. Obviously there are plenty of players worthy of electing to Cooperstown, but no one that 90% of the voters will agree on.

In fact I think this year's class will have only two inductees: Rivera and Edgar Martinez.

If I had a BBWAA HOF ballot, I'd vote for seven players:


I'm on the fence about Roy Halladay and Scott Rolen. As for Omar Vizquel, I plan to do a shortstop comparison post in the near future, like I did with Walker and right fielders.

*Schilling's career accomplishments are Hall-worthy, but I shudder to think of what his induction ceremony will be like. If the writers could get away with being immature children I bet they'd slam the door on this guy. Alas.


Who gets your vote on this year's Hall of Fame ballot?