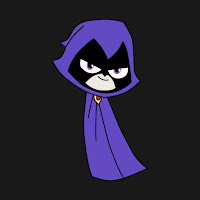 The Colorado Rockies did not have a double-A affiliate in their inaugural season of 1993. Fortunately for this baseball-obsessed Connecticut kid, the Rockies decided to make New Haven their AA home from 1994 to 1998. The franchise played at Yale Field under different affiliations until 2003, when the Blue Jays moved their AA club to Manchester, New Hampshire.

Many of the top prospects I saw in the Rockies years were pitchers, including...

Juan Acevedo, the aptly-named ace of the '94 Ravens. 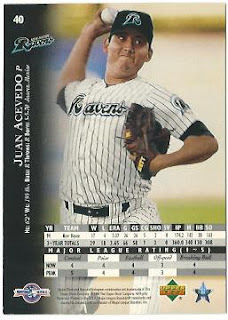 Juan's 17-6 record, 2.37 ERA and 167 strikeouts (with only 38 walks) boosted his stock in the Rox' organization. Baseball America ranked Acevedo the #55 overall prospect before the 1995 season. After a rough rookie season he would spend the bulk of his 8-year MLB career as a reliever.


Roger Bailey may have had his best pro season in the elm city. The right-hander had a 9-9 record in 1994 but his ERA was a career-low 3.23. Bailey made it to the show in 1995, but struggled in three seasons with Colorado. 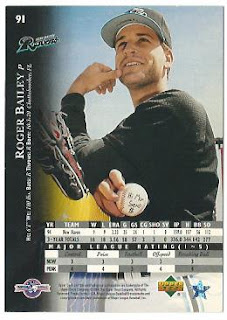 I recommend adding this card to your collection even if you couldn't care less about Connecticut cards - not only for the inscription on the back, but the photo on the front. 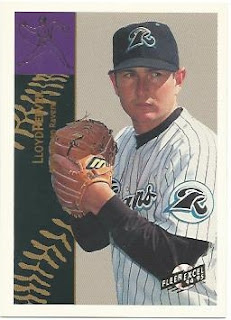 This card was part of a recent TCDB trade with 49ants. It's one of only three cards in my collection that a) was produced by a major card company and b) shows a player in the Ravens uniform on the front of the card.

I remember all three of these guys fairly well after 25 years, but my favorite Ravens pitcher to watch was Rod Pedraza. Pedraza was originally an Expos farmhand. A 13-3 record with a 3.24 ERA (7th-best in the Eastern League) was enough to earn him a call-up to AAA by the end of the season. I was sure that he'd end up in the Rockies' rotation before long, but he blew out his shoulder and missed all of 1995. He had another nice season in New Haven a year later, but ended up playing pro ball in Japan.

I don't have this card - or any Pedraza cards. Perhaps I'll trade for one in the near future.