I woke up earlier than usual this morning, thanks to a pre-dawn thunder shower. Started scanning the cards you'll see in this post, and I had some extra time so I snooped around Blogger a bit.

Most of you only know me from this blog, but one or two of you might remember when I wrote about personal thoughts and story ideas. I stopped doing that for many reasons: I ran out of story ideas, and my favorite bloggers stopped blogging. I got tired of writing about my life, my personal struggles, and the like - but never got tired of writing. I shifted my focus to a subject that would supply endless amounts of material and never looked back. Until this morning.

On this particularly dreary day, I started to miss Mich, and Sam, and Kayla. I wondered what happened to them, and it turns out that two of them have published novels recently. I probably could have done that, if I wasn't so focused on baseball cards (aw, who am I kidding? I could never do that) The last time I heard from Kayla was when I wrote a 3-part short story. I re-read it this morning, nearly two years later, and I still like it. I've got the urge to write again, but not the time. Yet.


Are there blogs (or bloggers) that you miss? Do you wonder what happened to them, or do you keep in touch outside of Blogger?


Nostalgia has also impacted my sports card collecting habits. One of the major reorganization decisions I made was to move my baseball card sets out of monster boxes and into binders, so I can flip through each card. I've started a tradition of buying overproduction-era wax boxes and other childhood favorites from Kruk Cards every August, around my birthday. I didn't want to do that this year. I wanted to purchase something more significant. But...

Right now I'm in the mood to grab series 2 boxes of 1992 Fleer Ultra, 1993 Fleer Ultra, and 1993 Leaf baseball. Once those sets are done, I want to buy boxes of 1993 Upper Deck baseball and football, and maybe 1994 Leaf baseball. Most current sets just don't appeal to me anymore - and even when the designs are nice (such as Stadium Club) the card count is discouraging. I'd rather spend $20 on a few hundred older cards than a few dozen newer ones. Maybe that will change if I go the August card show. Or maybe I'll see a discount table of $10-20 boxes from the '90s and hoard the hell out of 'em.

Anyway, I've rambled long enough. Here are the aforementioned cards I scanned this morning. These are two TCDB trades mixed together: I sent a half-dozen Phillies cards to herkojerko, and a dozen-plus San Francisco cards to 49ants.

I've never liked Roger Clemens, but I love 1993 Score Franchise inserts. When I wrote a post about these last October I had not acquired cards representing the Red Sox or the Packers. Now I've got both. [p.s. I'm working on a post about my favorite set from 1993]

This rookie card of "Mr. Devil" Ken Daneyko is from 1989-90 - seven years after he was drafted. (That's what he gets for being a defensive defenseman on a team that had only made the playoffs once in the '80s.) 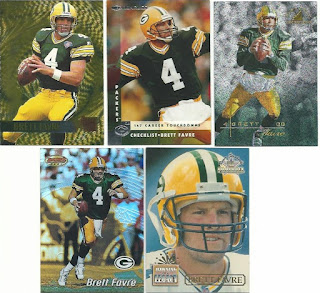 Five more cards of baby stealer Brett Favre brings my total to..702. (two are dupes, but I just picked up two more on COMC) 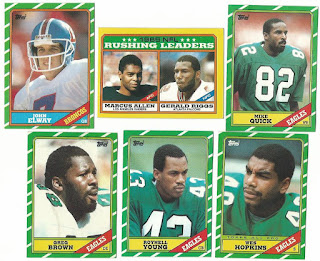 Six more cards for my 1986 Topps football set build, including a razor-sharp John Elway from 49ants. I'm now at 54.5% completion, and probably 50% of that has come through TCDB trades.

More set fillers. Theus is my 30th addition to the 132-card 1988-89 Fleer set. Dawkins brings me within 13 of the base NBA Hoops set and within 20 of the master set. Aguilar is for my second set of Heritage (base cards only)

I'm holding back the last four cards in these trades for a future edition of Connecticut Cards.


The Hockey Hall of Fame class of 2019 was announced today. Here it is:

Um..what? Hayley Wickenheiser was a lock, and Sergei Zubov was definitely one of the top two or three eligible defensemen. But Carbonneau? Not Alfredsson, or Roenick, or Turgeon, or Fleury, or Mogilny, or Tkachuk? Guy Carbonneau?

I don't want to say this is the NHL's answer to Harold Baines because defensive excellence is legit. But if he's in, then Patrice Bergeron better get in the minute he's eligible.

btw, just to bring this back to bloggers..Bergeron was Kayla's favorite player if I remember right..