Big Mailday and a Big Announcement

I received five packages in the mail today. One of them was a TCDB trade that was meant for another user (I notified the sender so that we can all get the right cards in the right place.) One of them was damp from the gloomy drizzle of an early winter day, and one was a total surprise. The other two were purchases. 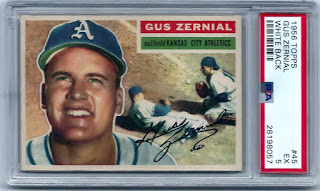 The latest addition to my 1956 Topps set build. This Gus Zernial card isn't as memorable as his 1952 Topps issue, but it's the 180th card in my '56 collection. Four more are on the way from COMC. My first - and largest - order is scheduled to be shipped today. I'll believe it when I see it. 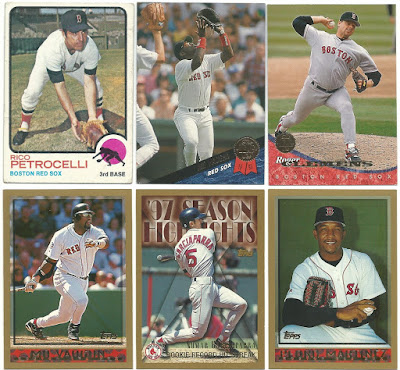 These six Red Sox were a surprise from Bo. I needed an upgrade for the '73 Petro and a third Mo Vaughn Leaf for my Boston binder. Over the weekend I deleted my entire wantlist on TCDB and started over with only set fillers because my team PC binders are full (and I was tired of getting offers of OPE Sox commons for current stars.) I've got just enough room for these guys. Thanks, Bo! 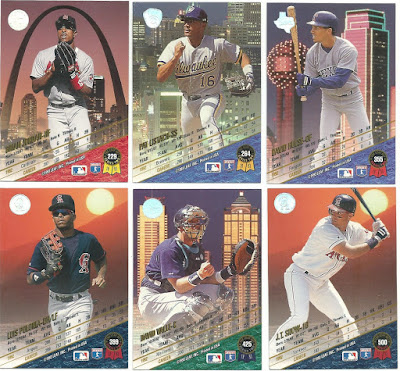 A week or so after placing an order at BaseballCardStore.ca I checked out Cardbarrel for more set fillers. Some 1993 Leaf singles are on their way to me via trade, so I only bought a small handful. 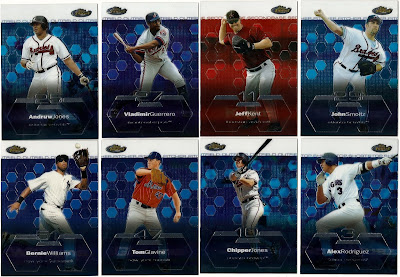 2003 Finest was a set I decided to build because it was small and shiny. I only need four cards to complete the 100-card base set, so I might try to add the ten autographs for a complete set. None of them are stars which should keep them affordable. The biggest name is Adam LaRoche, and I refuse to pay more than a buck or two for his signature. If I can't get it that cheap then I'll settle for the base set. 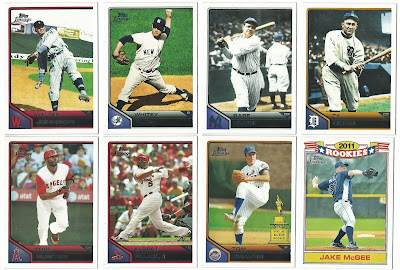 Bought a bunch of 2011 Topps Lineage, including some legends. Thanks to GCA I have most of the glossy rookies so I tossed a Jake McGee into my cart. Now I need just three of the 19 cards in the set (there's no card #15 for some reason?)

The stack of 2015 Opening Day in my order brought me to 87% completion of the 200-card set. I've updated my wantlist tab with the 26 remaining singles. 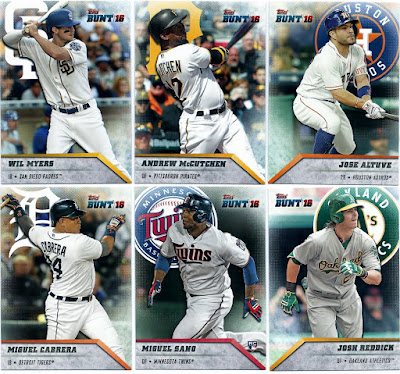 Bunch of Bunt here including the Wil Myers recently featured on Rod's blog and a Josh Reddick that I'd asked for in trade. My trade partner no longer had it so I had to purchase one from Cardbarrel. 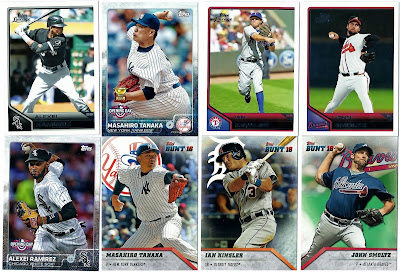 Here's something I found interesting: I ordered 85 set fillers across three sets released in the 2010s, and five players were needs in multiple sets (not pictured: Evan Gattis) In fact I needed John Smoltz cards in three of the four sets in which he appeared. 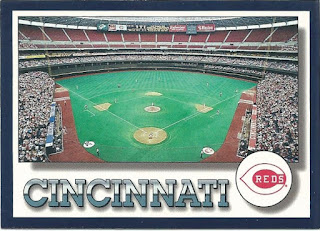 This is the only card in my Cardbarrel order that wasn't a set filler. It's a Franken-set filler. I had such a blast building those All-Time Team rosters and researching each player that I've decided on a sequel.

It would be too cumbersome to start an NFL series, and there's not a lot of NBA interest on the blogs (as evidence by my latest post at the 1993.) The only other sport that makes sense for this format is hockey: 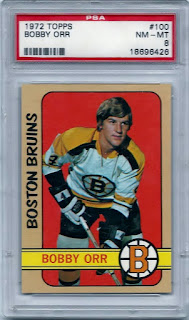 Here's my latest "big piece" purchase. I've always wanted a vintage Bobby Orr card and a confluence of good timing led me to pick up this beauty on eBay during a 5% bucks promotion. The back is off-center and the case is scratched, but nothing serious enough to spoil the joy of crossing this off my collecting "bucket list."

I know there's not a lot of NHL interest on the blogs, either (as evidence by my latest post here.) That's okay. I enjoy doing research and sharing what I've learned. Hopefully you will enjoy it, too.

My plan is to post an All-Time Team every day in January - though my past history of sticking to a posting schedule is mixed at best. I'm still deciding what to do about the 31st team: the Golden Knights "all-time" roster is pretty much their current roster. Will there be a "Best of the Rest" roster like the Barnstormers in baseball (the "Rovers" perhaps?) That's still to be decided. I'm sticking to the 'one player, one team rule' so don't expect to see Ray Bourque on the Avalance or Wayne Gretzky on the Kings.


p.s. I don't plan to post again until my COMC order arrives - or until January 1, whichever comes first.