I'm working on a massive and seemingly never-ending sports card organization project, and when I spend an extended amount of time in my sports card room, I like to have something to watch that doesn't demand my complete and undivided attention. Two weeks ago I watched a movie called Like Father with Kristen Bell and Kelsey Grammer. Last week I watched Nerve.. and yesterday I watched The Hunger Games quad-rilogy.

I've seen the first two Hunger Games films at least five times, and Mockingjay parts 1 & 2 probably four times. Watching them again got me thinking about how the Oscars completely ignore anything that isn't a prestige flick. It's bullshit.

I'm not saying that The Hunger Games films should have been nominated for Best Picture (and I'll give the Academy points for at least trying to include big-budget blockbusters since then) but I will say that upon my fifth viewing of this quad-rilogy, I was still emotional over Jennifer Lawrence's incredible performance as Katniss Everdeen. 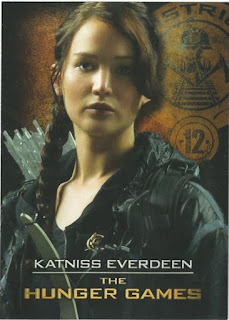 Jennifer has been nominated for four Academy Awards, and she's the youngest actress ever to receive three Best Actress noms. She was not nominated for Red Sparrow. I haven't seen that yet, so I can't say if she should have been.

However, I can say with absolute certainty that the best performances of her career thus far were not recognized by the Academy.

I could have picked a dozen other clips from these films, but you get the idea. It's clear that the Academy recognizes Jennifer Lawrence as one of most talented performers of the decade. What's not at all clear to me is how the Academy could reward her talent in one film and willfully ignore it in another.

Anyway, that's my mini-rant for today. Back to baseball card topics next time. :-)

Email ThisBlogThis!Share to TwitterShare to FacebookShare to Pinterest
Labels: Jennifer Lawrence, The Hunger Games, The Oscars