I'm not sure if this should be a "Question Thursday" or a "Blog Bat Around" or what...but do any of you collect cards of players who share your birthday? The topic came to mind from a care package between bloggers so I know there are at least a couple of you who do.

I had never thought to collect cards of players who were born on August 12. That is, until about three years ago when I was still collecting prospect cards. 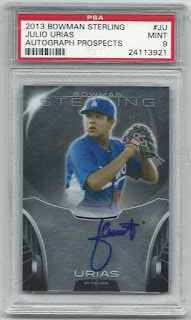 Dodgers lefty Julio Urias was born August 12, 1996 - exactly two years after the MLB players strike started, and sixteen years after I entered the world. Boy, if that doesn't make me feel old.. 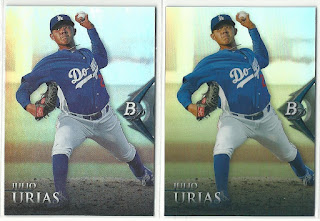 Half of my Urias collection comes from the same set, 2014 Bowman Platinum. 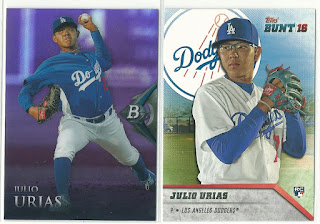 I haven't bought any of his cards in a while, but I'd be open to trading for a few or picking up any I see in a dime/quarter box at a card show. If I ever get to another card show.


Earlier this week I made the somewhat difficult decision to include this triple relic card in a blockbuster swap. Parting with this card (and reading Night Owl's latest post) got me thinking about what other players were born on my birthday. 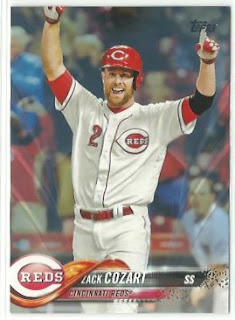 Zack Cozart is probably the best active player in baseball with my birthday. I pulled this Mother's Day Pink (I think?) parallel from a birthday-related purchase.

Two Hall of Famers were born on 8/12 (in the 19th century): Christy Mathewson and Ray Schalk, who was one of the not-crooked members of the 1919 "Black Sox." I'm going to try and add a Schalk card to my collection but he has very few modern cards. Pete Sampras has even fewer cards than Schalk. I'd always assumed he was the greatest athlete born on 8/12, since he was active and dominant while I was growing up (PTI saluted him on their Aug. 12 shows for about a decade) I don't have any of his cards but I definitely want to get one. Does anyone know of a tennis card collector? 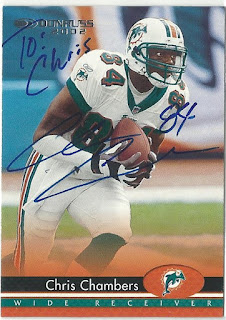 Chris Chambers was born exactly two years before me. Plaxico Burress was born a year before him. Titans tight end Delanie Walker is the best active NFL player with an 8/12 birthday. Basketball Hall of Famer George McGinnis also shares my birthday. I don't have any of his cards. Perhaps I should add a couple to my wantlist. Here's a guy who shares my exact birthday. Brazilian baller Rafael Araujo was born August 12, 1980. I don't have any of his cards in my collection, either. Khris Middleton and Antoine Walker are bigger 8/12 names who are represented in my basketball box. Colin Hemingway was also born the same day as me. He played only 3 NHL games, and appears on 54 cards. I have at least one in my collection - but the Black Diamond Update card is part of my set and it doesn't scan well anyway, so I used a card I don't have. This serial numbered SP Authentic RC is now on my TCDB wantlist. 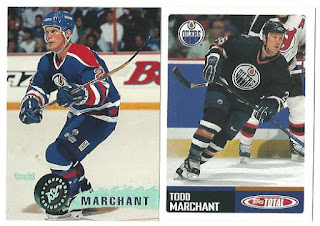 Todd Marchant won a Stanley Cup with Anaheim in 2007 and played in more games than any NHL player born on the twelfth of August. He was one of my favorite Oilers of the late 1990s-early 2000s. I hadn't been aware of any (team) sports stars who shared my birthday before collecting his cards at the time.

Which pro sports stars were born on your birthday? Do you collect their cards?

Email ThisBlogThis!Share to TwitterShare to FacebookShare to Pinterest
Labels: birthday