All my 50/50 trade packages (and a PWE to Gavin) have been mailed out. If you'd like a tracking number, e-mail me. If anyone is still interested in a 50/50 swap, I have two more bubble mailers left. They're large mailers so I could probably send two lots in one. Just sayin'.

If any of you have perused my wantlist you may have noticed two lesser-known players I collect: Peter Worrell (I swear I'll discuss him one day) and Trevor Williams. Worrell played for a local AHL team, and I've hoarded his cards since I was a teenager. My Williams collection started sorta by accident...

The first year I began shopping on COMC was 2014 (I discovered the site while searching for rare Peter Worrell cards.) Back then they did a Spring Cleaning promotion, a Black Friday promotion and a Boxing Day promotion. It was during that week(end?) that I spotted this low-numbered purple prospect card: 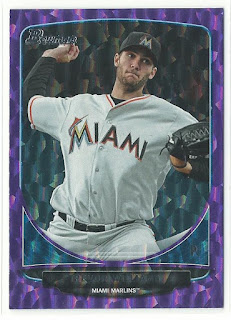 At the time I was picking up cheap prospect cards (I bought an Aaron Judge mini for $0.63. Wish I kept it.) Some quick research on Williams gave me the impression that he was a prospect with some upside, possibly a future #2 or #3 starter. Before the promotion ended I found another cool card: I'm a sucker for color-matching refractors, and if I had found this one first I probably would not have purchased the purple parallel. But, because I was already invested in this mid-tier Marlins prospect I decided to see what else was out there.

COMC had dozens of Williams autographed cards listed dirt cheap. Base autos were $1-2, and refractor autos were under $3.... 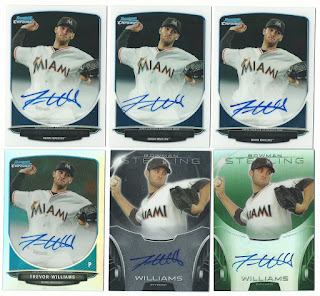 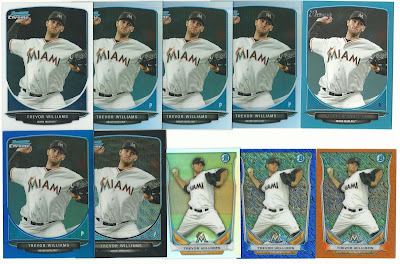 By the time my order arrived I had 25 Trevor Williams cards (I've sold a few since.) I hadn't even realized it, but I was "prospecting" the 5th-ranked prospect in the Marlins organization. Williams was not a Top-100 blue chipper so I knew he had a low ceiling - but he had good control, and the Fish didn't have a whole lot of starters behind Jose Fernandez.

After the 2015 season, Williams was traded to the Pittsburgh Pirates - for a "special assistant". I had checked MILB.com periodically to see how Williams was doing in the minors, and even though he wasn't going deep into ballgames he seemed to be progressing well enough to reach the show.

The Bucs gave Williams a cup of coffee in September and he struggled as a rookie reliever. I did not expect him to be in the Pirates' plans for 2017, and I wondered what to do with all those Trevor Williams prospect cards. But Trevor did make the Bucs' rotation out of spring training, and has stayed there ever since. He's been... serviceable. Not spectacular, but not awful, either.

I had sort of forgotten about him for the first half of the season, and it seemed like every highlight I saw of his starts were highlights for the opposing lineup. But the more I read about this kid, the more I liked him and rooted for him. Here's a heart-warming story about his first MLB win (in 2016) and here's a story about his experience in the Little League classic. That last one inspired me to write this blog post; who knew Pittsburgh's fifth starter was a "Twitter icon?"?

So yeah, I guess I've become a fan and collector of T-Will...even though I haven't bought any of his cards in at least two years. That might be because he hasn't had any new cards since his trade to the 'Burgh.

For someone who grew up with 792-card sets and (at least) three different brands, it strikes me as odd that many of today's major leaguers have more cards before they make the majors than after. Trevor Williams isn't a big name, but he is a big-leaguer. Hopefully Topps will include him in Heritage high numbers or some other late-season release so I can add something new to my initially unintentional but now intentional PC.

Are there any major league players you follow who have yet to be included in cardboard?