JBF BFG prize & my COMC find of the month

Just a note: I'm going to keep pimping the 50/50 Trading Post until the end of August. There are still some great team lots available - Yankees, Dodgers, Cubs, Pirates, and all of the mystery lots. The first batch is being shipped out tomorrow, so claim one today!

Also, I'm awarding a special prize to the trader who sends the best return lot - as a nod to the always generous Wes (aka JayBarkerFan) who flagged me down on my other blog and offered to send me something. I had completely forgotten about his Big Fun Game. 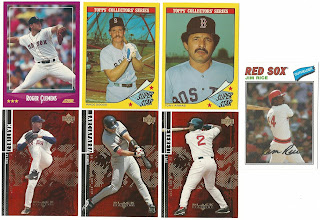 I saw a lot of oddball-ish stuff in the late 1980's but I dont remember those yellow-bordered Super Star cards. The Jim Rice '77 is a cloth sticker from 2012. 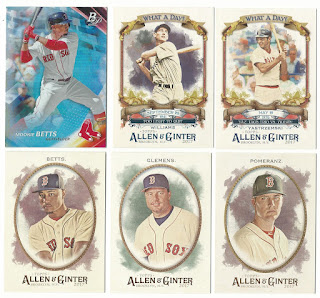 Moo-kie! I dig that pale blue background on the Bowman Platinum card. The "What A Day" inserts are neat; I just reached out to another blogger about the Dustin Pedroia... cant remember who it was though!

These appeared to be extra goodies Wes included with my BFG prize.. 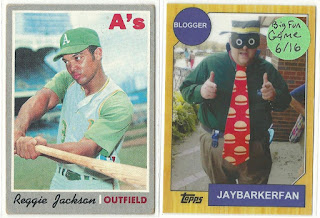 That explains why I forgot all about the Big Fun Game - my Pop passed away on 6/17.

Wes, thank you for your generosity! If I had any Josh Willingham hits for you I'd send 'em your way. Perhaps I'll go hunting for some on COMC....


I'm thinking of starting a new monthly feature on my blog called 'COMC find of the month', or something similar. August isn't over yet, but I think I've already got one...

Last week I racked up a bunch of COMC challenge credit and decided to take a couple days off for my birthday - because sometimes I feel guilty about ignoring the family for three hours so I can make $3. I bought a bunch of 30 cent cards from 2016-17 OPC Platinum (thanks, ePack!) and decided to focus on bigger fish when I resumed COMC "work" this week. But every time I tried to get in, the challenge page was closed.

I had hoped to save up enough credit to purchase something I very rarely consider - a non-sports, non-GPK card. One seller posted a 75% off sale and had some Castle cards that caught my eye: 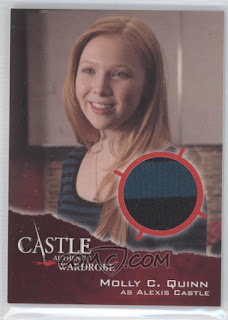 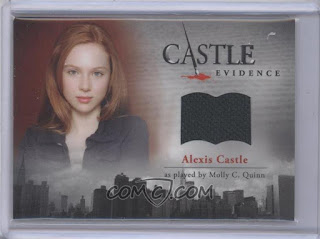 I love gingers. And if you've ever seen Castle you probably thought Richard's daughter Alexis was either adorable or annoying. I happen to think that Molly Quinn is a cutie.

These relics were $6.50 and $9.25, respectively. But I was unable to earn enough COMC credit to buy either one - and they both sold sometime on Tuesday. Can't say I was surprised; there's only one other wardrobe relic left on the site. Non-sports stuff goes fast I guess.

So If I was unable to snatch up a piece of Molly Quinn's clothing then what was my big "COMC catch"?

Late Tuesday night, just as I was about to turn off my computer and go to sleep, I saw a low-numbered parallel pop up on the hockey page.

The seller wanted $1.24 ..and I only had a dollar. Noooo! This was shaping up to be a crappy COMC day. I really did not want to lose out on this card, but COMC challenges were closed and it was late. As a shot-in-the-dark I tried to make a best offer of $1.00. The seller didn't auto accept or auto reject, so I had to wait for their response.

The only way I could make another quarter was to sell one of my cheap cards at a loss and hope this low-numbered parallel wouldn't be gone by the time it sold. I put an Alex Ovechkin insert out there at $0.26 and hoped for the best.

But before my Ovie was practially given away.. the seller accepted my offer! I immediately pulled back the Ovechkin card and pumped my fist at managing to keep both this card... 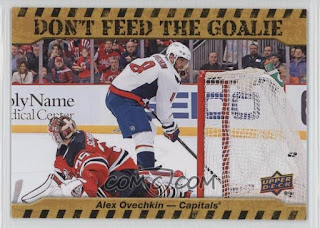 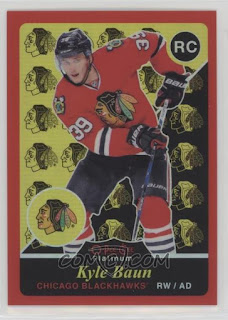 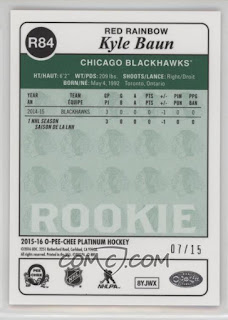 
That's right, this red rainbow Blackhawk is numbered to just 15, and it only cost a buck! I'd say that makes up for missing out on Molly, wouldn't you?

I've found a lot of great cards for my OPC Platinum Retro Franken-set on COMC, but this might be the best get yet. I never would have expected to add a Red Rainbow parallel; the cheapest one on the site is Steve Mason at $11.50.


Many thanks to that seller, for accepting my Hail Mary offer, and thanks again to Wes for the Reggie and the Red Sox!