How I Spent My Spring Vacation

My ten-day vacation is halfway over, and today is the last day I'll have the house to myself; my wife and daughters have tomorrow off.

For the past three days I've been digging through my closets, pulling out summer clothes and sports memorabilia. Eventually I'll show off a few of the items I uncovered. Some of them will be made available in the Sports Card Tour giveaway draft. The tour is halfway over, too.

It's so refreshing to be away from my debt collection job for a few days and do something fun. I've been able to play my music loud while cleaning the house. There are bands I listen to on sunny days and bands I listen to on rainy days..and then there's Pvris which has become sort of an "all-weather" band for me. 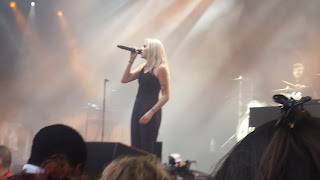 My wife and I saw them open for Muse/30 Seconds To Mars last year. I was very impressed. I'm never impressed by an opening act. Pvris is really good. If you haven't heard them yet I highly recommend you give them a listen.


I've also been staying up late every night - because I can. Before my girls were born I was a bit of a night owl. When work grinds me down I'm ready to sleep by 11pm (10pm if I don't get my nap in) All this week I've been staying up past 2am binge-watching The West Wing. I've been an Aaron Sorkin fan since Sports Night but I never got into The West Wing - mostly because I was still a teenager when it debuted and I had no interest in political affairs... but also because my ex-girlfriend loved the show so much she ran a fansite (or blog?) called Political Affairs. I think it was mostly dedicated to Josh and Donna; I seem to remember her shipping them (and now I know why...18 years later) 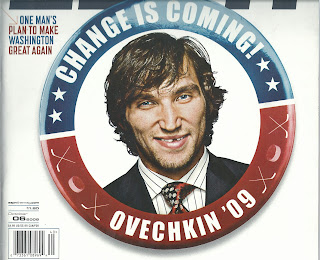 Equally as dramatic and entertaining are this year's Stanley Cup playoffs.

I've been in a semi-abusive relationship with hockey for years, and part of the reason why I've pared down my hockey card collection is because the sport seemed to be getting so very predictable. Certain teams and certain players never get beyond a certain point.

That seemed to be the case for my favorite NHL player, Alex Ovechkin. 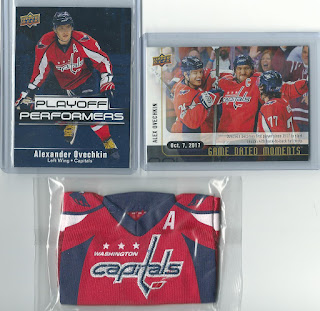 Like a lot of you, I get very excited about baseball at the start of Spring Training, right around when the NHL has its all-star game and I can ditch hockey for a week or so. If my team is in a playoff race (which the Devils were this year) I'll follow it closely every night in March - and then pause to get excited for baseball's Opening Day. After the first Red Sox series and/or the Sox' home opener I turn my attention back to the NHL when their season ends and the playoffs begin.

Usually I'm back on baseball by the first week of May; in the past 15 years I've supported NHL teams who either miss the playoffs entirely or are eliminated in the first round every year except 2006 and 2012. (Every six years..hmmm) Then I cheer for Ovechkin and the Capitals until they are inevitably eliminated in the second round.

I haven't been following my Sox since that 17-2 start to the season. I know a lot less than I should. Sorry baseball, but I just can't take my eyes off this insane NHL postseason. 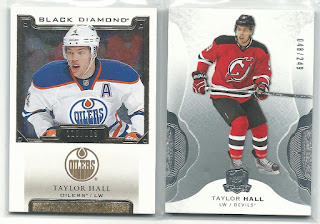 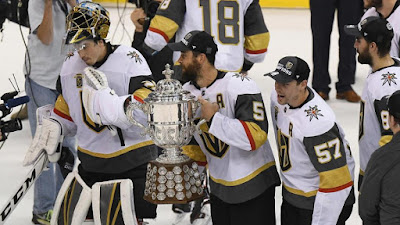 And then, last night. Washington won Game 7. I didn't want to say it, but it just felt like once they won Game 6 this was inevitable. You might even say predictable. And so Alex Ovechkin, Nicklas Backstrom, Braden Holtby, and the once-cursed Caps finally get to play for the Stanley Cup. 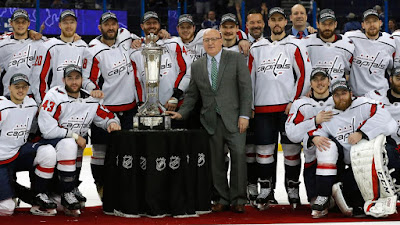 The Vegas Golden Knights have home ice advantage. In the Stanley Cup Final. In their first season. Predictable, right?

You know...finally getting to the final and losing to a team that didn't exist sixteen months ago would be the most Capitals thing imaginable. But maybe this is Ovie's year. Maybe hockey isn't so predictable after all.

Anyway, the series doesn't start until Memorial Day. The end of my vacation. By then I should have time to read a book, watch another season of The West Wing and write two more blog posts. I'll have a Sports Card Tour standings update as well.

And I should probably see what's going on in baseball. Are the Yankees still struggling to stay above .500? No? They upstaged the Sox, went 17-1, and are breathing down Boston's neck in the AL East?