The second half of The Collector's Sports Card Tour kicks off in the Music City. Today we're in Nashville. 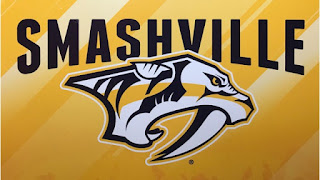 Nashville has two pro sports teams - the Predators and the Titans. The Preds lost last year's Stanley Cup Final to the Penguins; they had the NHL's best regular-season record this year. The Titans were one yard away from winning Super Bowl XXXIV after the 1999 season.

Both franchises arrived in Nashville in 1998; the Titans (who were still the Oilers) had played the 1997 season in Memphis after relocating from Houston. 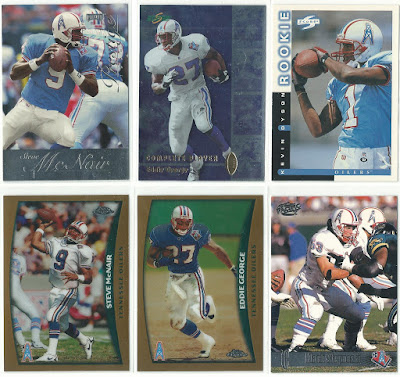 Steve McNair was the Titans' signal-caller in Super Bowl XXXIV and was the NFL's MVP in 2003. 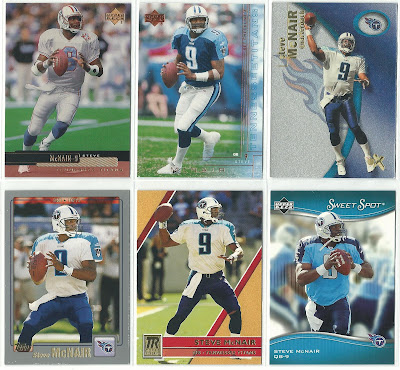 McNair would probably be considered for the "Hall of Very Good"; I keep his cards in my star player box along with a couple other non-HOFers like Joe Theismann, Drew Bledsoe, and Donovan McNabb. 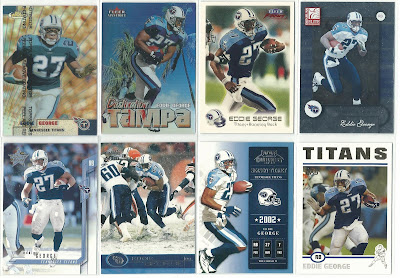 Eddie George was a player I sort-of collected during his career. I had a 1996 Topps Chrome RC and a 1997 Finest gold refractor at one point, but I sold them both many years ago.

Jevon Kearse was the NFL's defensive rookie of the year in 1999 and led the AFC Champs in sacks that season. I had the complete set of 1999 Topps Chrome mainly for the quarterback class but the Kearse card was a big deal at the time. 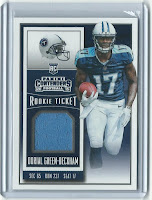 Retail relics! The Hunter was pulled from a Fairfield repack box, the Green-Beckham from a Contenders box I ordered from Dave & Adam's. 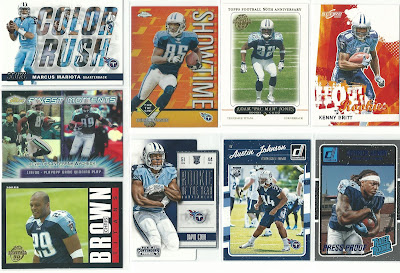 The rest of my Titans hits, including a refractor parallel of the "Music City Miracle". Kenny Britt was a star wide receiver at Rutgers. The Color Rush insert is my only Marcus Mariota card.

I don't often have the space on these posts to mention minor league teams, nor do I have enough minor league cards to show. This time I have just enough of both. 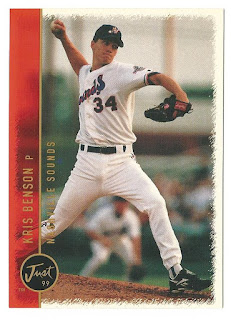 The Sounds are Oakland's triple-A team now, but they were the Pirates' top affiliate from 1998-2004. 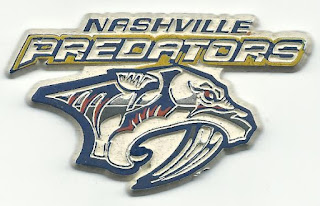 Nashville's NHL team is a model for expansion franchises in non-traditional markets. But the city could have gained someone else's team - and lost its own. Relocation rumors swirled around the New Jersey Devils during their Stanley Cup-winning season in 1994-95; commissioner Gary Bettman had absolutely no objection to the potential move. 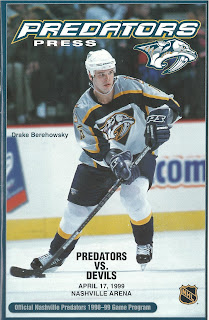 Nashville was also a possible home for my other favorite hockey team, the Hartford Whalers. Hall of Fame asshat owner Peter Karmanos dismissed the rumors, stating that Nashville wasn't a hockey city. (And Raleigh is?)

A decade into the Predators' existence Canadian businessman Jim Balsillie attempted to poach the franchise and move it north of the border. Balsillie was so eager to move an NHL team to Canada - any team, really - he began accepting season ticket deposits for the "Hamilton Predators." 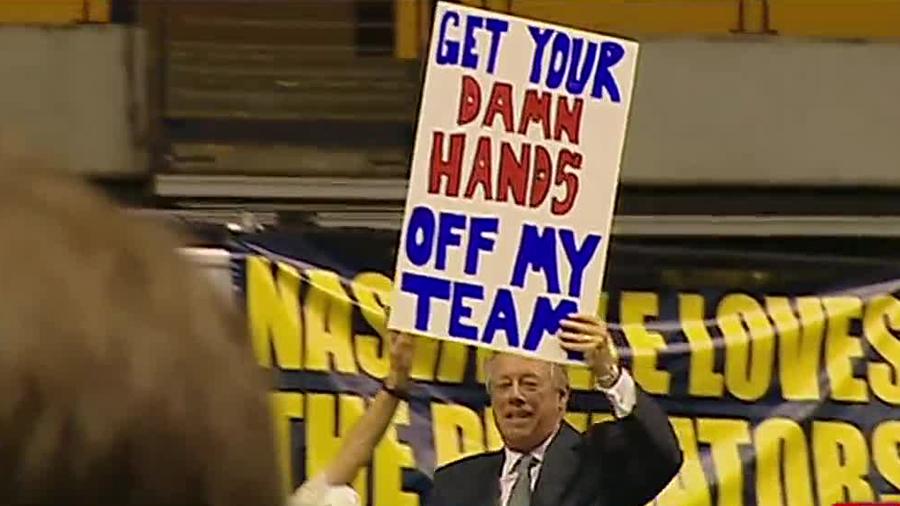 Obviously the Preds stayed put and under new ownership the team continued to improve on and off the ice. In 2017, ESPN named the Predators the best-run franchise in all of pro sports. Meanwhile, Balsillie and his Blackberry business went in the opposite direction. 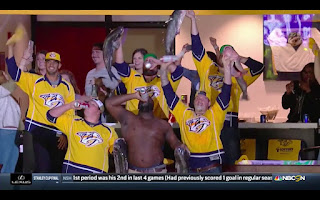 Enough with the boardroom blather. Let's get back to the cards! 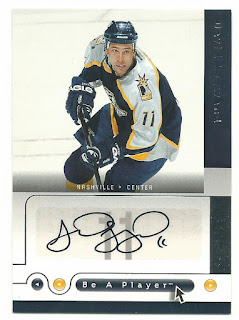 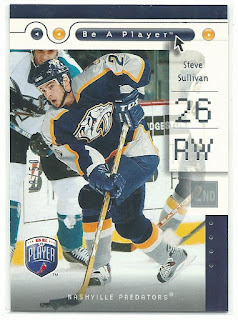 David Legwand was the franchise's first-ever draft pick (2nd overall in 1998.) I liked the '05-06 Be A Player design a lot more than most of their sets. The base cards had '1st period' parallels #d to 100, '2nd period' cards like this Steve Sullivan were #d to 50, and '3rd period' parallels were #d to 10. I think there were also 'Overtime' one of ones. Never saw one though. 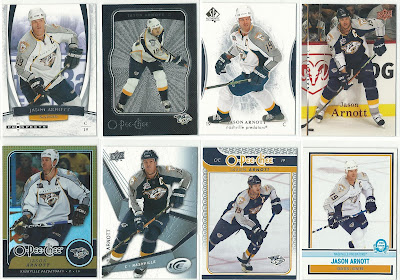 Jason Arnott was the Predators' captain for three years and still holds the franchise record(since tied) for goals in a season with 33 in 2008-09. My wife was a huge Arnott fan; she has nearly all of his jerseys including a white Preds sweater (She's never worn it; I just checked our closet and the tags are still on.) You'll see Arnie again in my next post. 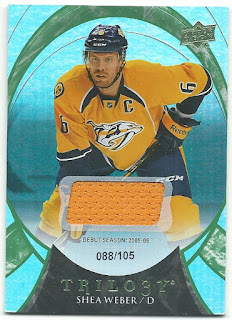 Shea Weber succeeded Arnott as Nashville's captain. At one point Weber was the NHL's highest-paid player, thanks to a $110 million offer sheet submitted by the Philadelphia Flyers - which the Preds were forced to match. 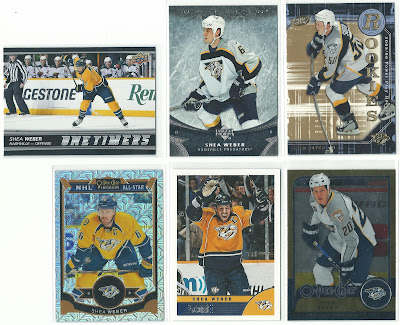 The Predators were built around star defensemen Weber and Ryan Suter for years. The One Timers Weber was a cheap 30 cent insert thanks to ePack; I like it because it shows off his booming slap shot. Ovation was released in four 50-card tins; you had to buy all four to complete the set. My mom bought me one - but it was the right one. 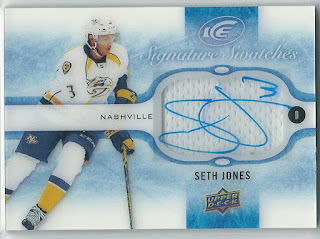 Seth Jones was expected to take Suter's place on the Nashville blueline - until Roman Josi, Ryan Ellis, and Mattias Ekholm emerged. He was traded to Columbus for center Ryan Johansen. 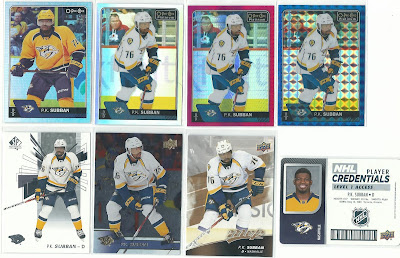 The Predators found a sucker taker for Weber's huge contract, flipping him to Montreal for a younger, cheaper, and better defenseman in P.K. Subban. Upon arriving in Nashville, Subban won over the locals by singing Johnny Cash's "Folsom Prison Blues" at a Honky Tonk bar.

All of these cards were added to my P.K. PC via COMC - most of them were 35 cents or less, including the SP Authentic base card. 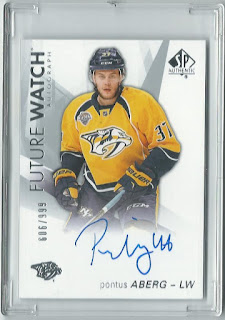 Pontus Aberg had a decent enough postseason performance during the Preds' run to the Cup final that I gambled $5 on this autographed rookie card. He was traded to the Oilers in February. 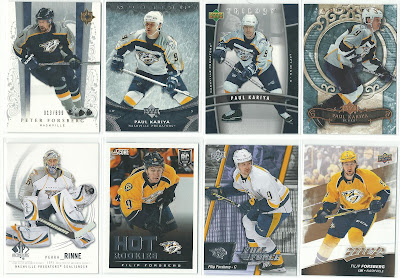 Aside from Subban, the only Predators cards in my star player box were those of Peter Forsberg and Paul Kariya - Hall of Famers who played in Nashville near the end of their careers. I've considered adding Pekka Rinne and Filip Forsberg (no relation) to the star box. 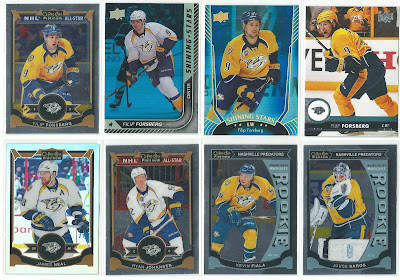 Forsberg will stay in my commons binders for now; there are too many forwards with better stats that I dont think have hit hobby stardom yet. I bought enough discounted blasters of OPC Platinum at Dave and Adam's to build the set..but I get too many dupes.

Pekka Rinne is incredibly frustrating to me. He's a Vezina trophy finalist for the fourth time but has never won the award. He's looked unbeatable some years and average in other years. I've tried to sell this Ultimate RC when he's been hot - especially last spring - but couldn't find any takers. I probably overplayed my hand asking for $30; if this postseason was any indication his best days appear to be behind him. But you never know what you're going to get with this guy.


You may have noticed a new tab at the top of my blog. This is the official standings board for the Sports Card Tour giveaway contest. I'm going to publish these SCT posts as quickly as I can so that I can start giving stuff away. Hopefully I can post three per week for the remainder of the tour.