Bienvenue dans la Belle Province! The Collector's Sports Card Tour is back on the Canadian side of the border. Today we're in Montréal. 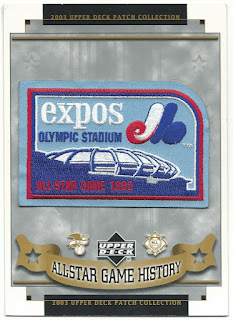 Montréal is home to two pro sports teams - the Canadiens and the Alouettes. The Als have won seven Grey Cups; despite their success the franchise has folded on more than one occasion. (One of my Canadian readers will have to tell me if this is unusual for CFL franchises.)


An astounding 23 Stanley Cups have been won by Club de Hockey Canadien; their last victory in 1993 was the last time a Canadian-based team won the Stanley Cup. 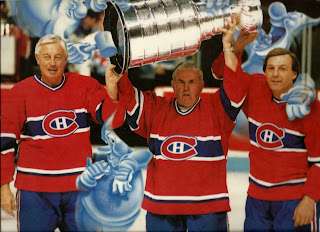 My LCS had this McDonald's place mat lying around and I took it home; it's from the closing of the Montreal Forum in 1996. No idea how a dealer in Connecticut got his hands on it. 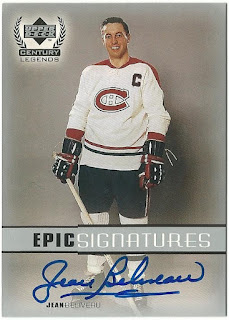 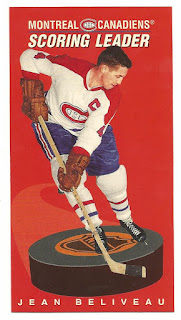 The great Jean Beliveau centered the third line of my Blog Skate Around all-autographed team. I wish I could tell you the Parkhurst tallboy is legit, but it's from a 1994 set of "reprints" - which is sort of a misnomer because these were never actually printed in '64-65. 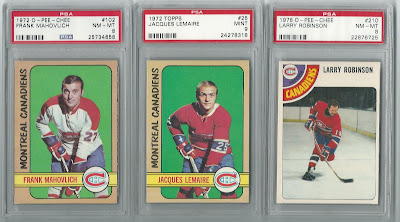 Had I been alive to witness the Habs' dominance over the NHL I probably would have hated them - especially when they fleeced the Golden Seals for Guy Lafleur. Since I've only been alive for two of their Stanley Cup wins (and I'm 37!) I have a ton of respect for their history and even started a bit of a '70s Canadiens PC; it was pushed to the side when I saw the prices of Ken Dryden cards. 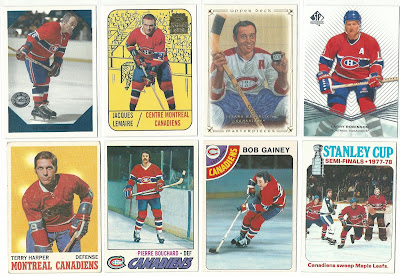 Here's a sampling of that collection. The Terry Harper was one of the three or four cards my former neighbor gave me; there's a small pen mark on the back. I bought the Pierre Bouchard on COMC for about a buck even though I had never heard of him; I don't even remember reading about him in Ken Dryden's best-selling book The Game. 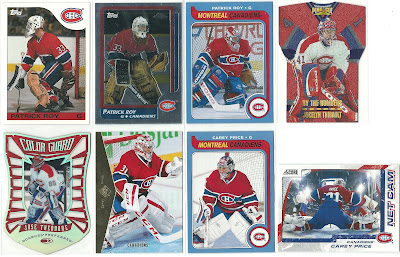 Perhaps no positional assignment in sports is as prestigious as goaltender for Montréal. From Georges Vezina to Jacques Plante to Dryden the Canadiens' net has been guarded by some of the greatest the sport has ever seen. I was a bit of a Patrick Roy fan in my early years of watching hockey but I soured on him after he pitched a fit in '95 and demanded a trade to Colorado. Carey Price isn't one of my favorites either, but I need his Black Diamond RC to complete my set. 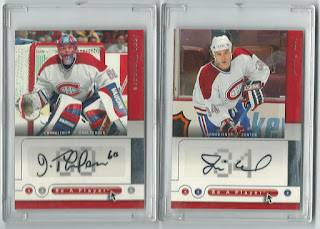 Jose Theodore is okay in my book. He was the NHL's MVP in 2002 - an award Price also won but Roy never did. Jersey Jim Dowd won a Stanley Cup with the Devils. 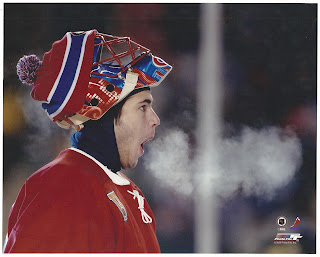 Theodore was the Habs' goalie for the NHL's first outdoor game, which was called the Heritage Classic. This is one of a half dozen Heritage Classic 8 x 10s in my collection. 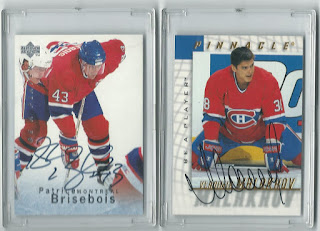 My wife had (or heard) a nickname for Patrice Brisebois. She called him "Breeze-by" (These are her cards, btw.) 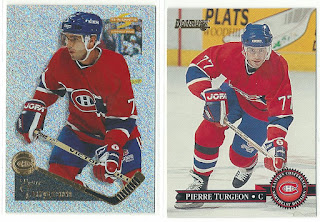 My first statistical analysis post attempted to prove that Pierre Turgeon belongs in the Hockey Hall of Fame. I'm planning to do a similar post about first basemen soon. 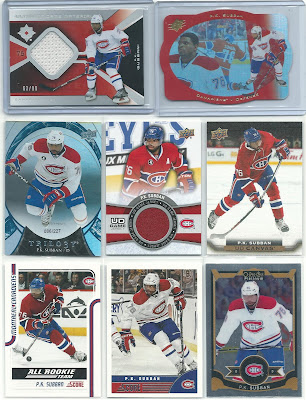 P.K. Subban won a Norris Trophy in 2013 and donated $10 million to a Montréal hospital. Then the Canadiens traded him to Nashville because he's black he's not a cliché machine Marc Bergevin couldn't carry Sam Pollock's briefcase. You'll see more P.K. in my next post. 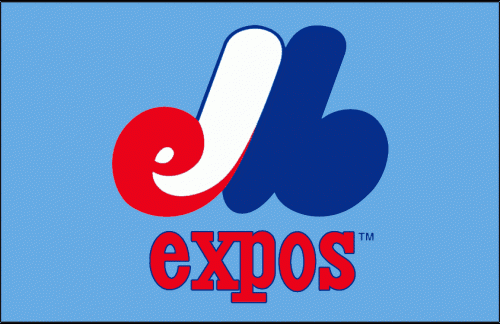 The Expos are still beloved across North America, more than a dozen years after departing for D.C. They made the playoffs just once in their 36 seasons in Montréal - the players' strike in 1994 robbed them of a potentially pennant-winning season. (If you haven't seen MLB Network's documentary The Colorful Montreal Expos I highly recommend it) 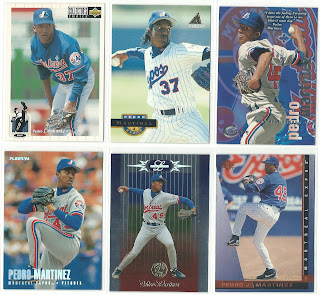 Pedro Martinez was just beginning his ascent to greatness in '94. When he won a World Series with the Red Sox ten years later, he dedicated it to the Expos fans who had just said au revoir to their team. 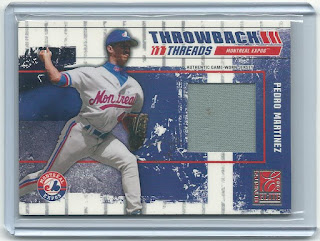 I had this Expos relic in my collection before I had any of his Red Sox relics. 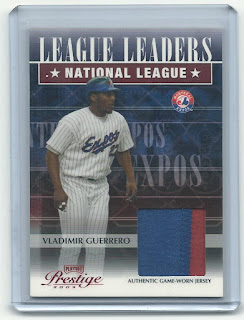 Vladimir Guerrero will enter the Baseball Hall of Fame this summer. Many baseball fans who associate him with Montréal thought he'd enter Cooperstown wearing an Expos cap. However, Vlad chose to have an Angles hat on his plaque. I bought this patch card on COMC in March for only $2.99. I wasn't planning on making any more purchases on the site but I couldn't pass on that deal. 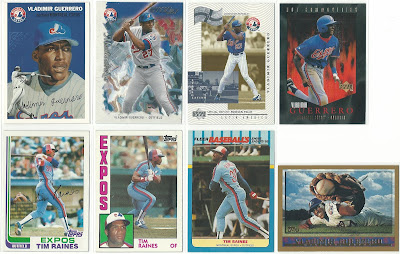 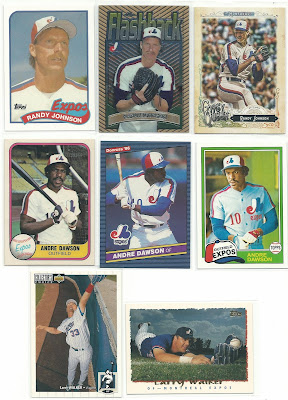 It also means that the Rockies are the last franchise without a HOFer. Larry Walker would likely rep the Rox - but I don't think he'll get in. 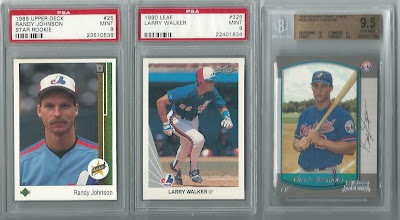 I've toyed with the idea of completing the 1990 Leaf set, since I have all of the key rookie cards. (Same for 1989 Upper Deck.) Why do I have a graded Grady Sizemore RC? Good question. He was a guy I used to collect when he was an all-star Indians outfielder. I really don't need a slabbed copy of this card but it's pointless to sell it and not worth the trouble to crack it open. 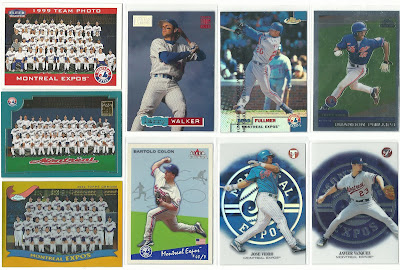 I remember when the Expos went "all-in" chasing a playoff berth in 2002. The Bartolo Colon trade didn't seen smart in hindsight but it was a move they had to make. Colon is the last active player who suited up for the 'Spos. 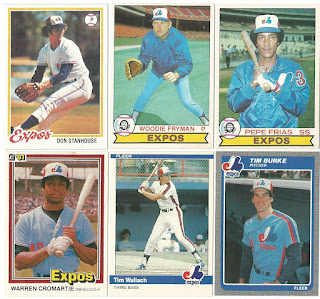 Some older Expos. I bought the O-Pee-Chee cards on Just Commons because I liked the idea of having Montréal cards with French text on the back. The '78 Stanhouse was one of the Topps Original cards I pulled in packs of 2008 Topps (I also got a '77 Rick Rhoden and a 1990 card.) 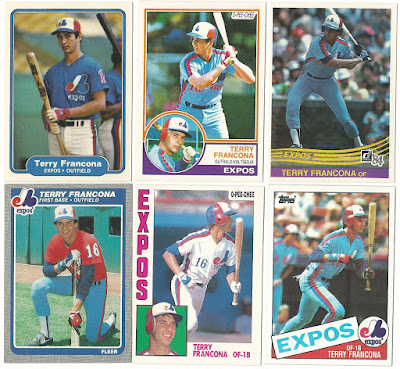 I've considered starting a Terry Francona PC of just his base cards. These were also in the Just Commons order- except for the 1984 Donruss, which was in the eBay box of randoms.

Like most baseball fans, I hope to see major league baseball return to Montréal someday. It could be an expansion franchise (perhaps Portland could be the 32nd team) or the relocation of an existing team. For example, what if the Rays left Tampa for Montréal and formed a real rivalry with the Blue Jays? That sounds great in theory - but unless the city can replace the aging (and ugly) Olympic Stadium no team will consider it. Not even the Rays.

Favorite Expos player (all-time) : This is a tricky question for me. I'm inclined to say Pedro Martinez but I think of him more as a Red Sox than an Expo, for obvious reasons. Then again, nearly all the players we think of as "true" Expos left town eventually... so I guess it is Pedro.

Next tour stop: We're halfway home and headed to Nashville.