The Sports Card Tour bus has picked up some new passengers, just in time for our stop in the Twin cities. Today we're visiting Minneapolis and St. Paul. 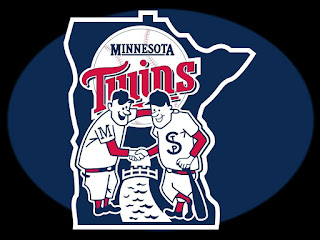 Minneapolis is home to three pro sports teams - the Twins, the Vikings, and the Timberwolves. (The NHL's Wild play in St. Paul.) The Wild and Wolves have not advanced past the conference finals; both teams lost in the first round of this year's playoffs.

The Vikings lost four Super Bowls from 1969 to 1976. They have not returned to the big game since.

The Twins two World Series titles in 1987 and 1991 are the area's only championships since George Mikan led the Minneapolis Lakers to five NBA titles in the league's early years. I've already posted my Mikan card twice - in my L.A. post and my 99th post.

These Twins autographs were part of my Blog Bat Around post.

I also have some high-grade Twins cards I purchased from 4 Sharp Corners of the same two players. Now all I need is a Rod Carew autograph to match up with this one: 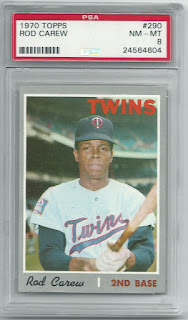 One of the things I acquired from working at a card shop was a near-complete set of 2000 Finest. It took me forever to collect all of the short-printed, serial-numbered rookie cards. 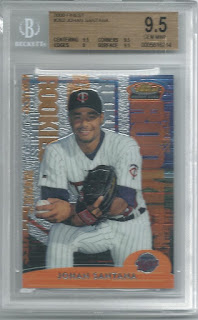 Johan Santana was the only notable rookie in the set (unless you're a fan of Aaron Rowand or Brett Myers) which partially explains why it took me over a dozen years to complete it. 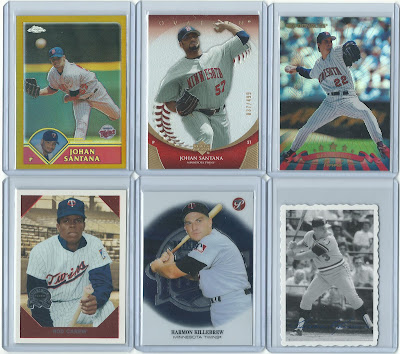 When Santana was at his peak, my friend Brandon and I were scared to death he'd end up on the Yankees. Even with Johan at the top of their rotation, the Twins couldn't take down the "Evil Empire" in the playoffs- and I don't think they ever have. 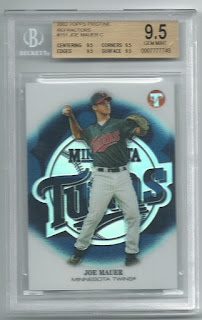 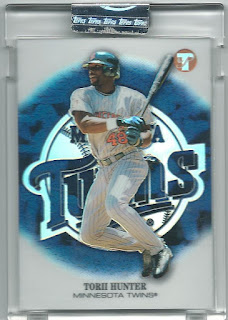 2002 Topps Pristine is one of my favorite modern sets; I have about 20 base cards, four or five uncirculated refractors, and two BGS-graded rookie cards, including Joe Mauer. 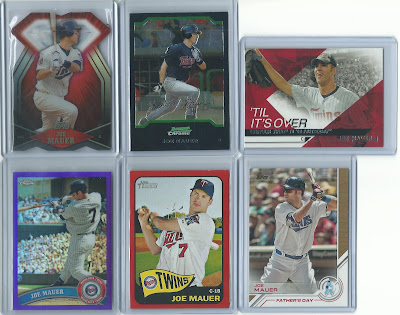 PSA president Joe Orlando showed how incredibly biased he is towards Yankees in his list of most collectible catchers of all time. He picked four Yanks- including Jorge Posada- and dissed Mauer, who had won an MVP trophy and three batting titles in his first seven seasons.

Mauer's move to first base was meant to prolong his career but his production has suffered  since. Do you think he'll reach the Hall of Fame, or the 3,000 hit plateau? Let me know in comments. 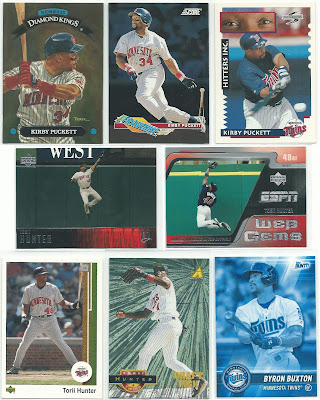 Minnesota has seen some fantastic center fielders over the years, including Hall of Famer Kirby Puckett and 9-time Gold Glover Torii Hunter. Byron Buxton has all the tools to continue that legacy. 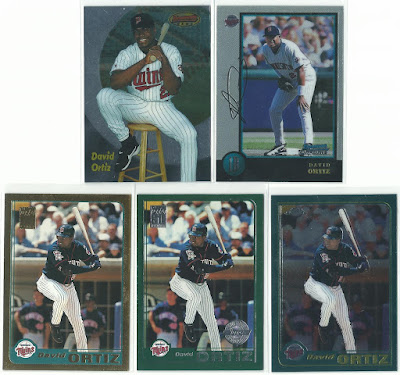 David Ortiz broke into the bigs with the Twins-who were overflowing with slugging first base/DH type players during his tenure. You can speculate why he didn't break out until arriving in Boston but he didn't have an everyday role or Manny Ramirez protecting him in Minny. I don't have either of Big Papi's 1997 rookie cards; can't bring myself to pay that much for either the paper-thin Fleer card or the similarly bland Ultra RC.

Another one of my all-time favorite athletes played in Minnesota...at the end of his career. 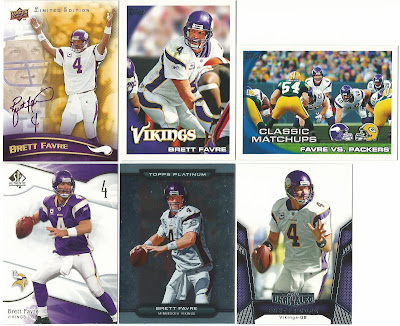 I wasn't as angry as most Packers fans when Brett Favre finagled his way onto the arch-rival Vikings. Sure I was conflicted when the teams played each other, but I couldn't blame Brett for chasing a ring with a team that was one capable QB away from Super Bowl contention. Unfortunately, that capable QB threw an interception in overtime of the 2009 NFC Championship game and cost the Vikes a trip to the Big Game - though it should be noted the Saints had a bounty on Brett's head... 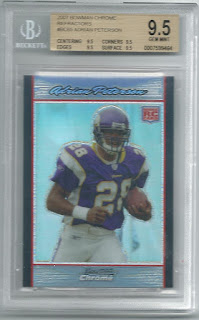 ...and Adrian Peterson fumbled twice in that game. (I thought he had three fumbles but PFR disagrees) I treated myself to this A.D. RC after a particularly rough day with the in-laws. I sort-of blamed Peterson for costing Favre a chance at another ring-but I still respected his incredible career. 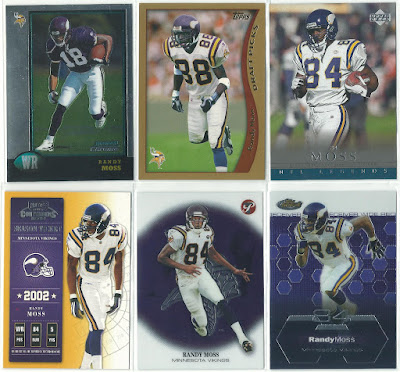 Randy Moss was another Vikings great that I wanted to like. He could be an immature jerk at times but I had to admire his talent. His long strides and leaping ability reminded me of a gazelle for some reason. One of my favorite cards of the 1990s was his Finest RC-which I had graded by BGS. Unfortunately the dye faded yellow (inside the case?!?) and I sold it. 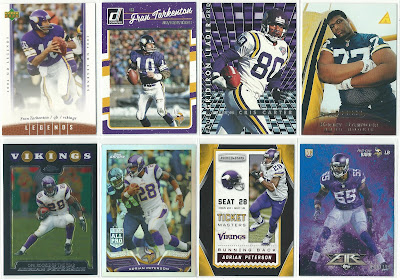 Some more Vikings of note. Fran Tarkenton's career stats were kind of mind-blowing for his day. I found that Anthony Barr Fire RC on COMC and happily paid $1.25 for it...until he knocked out Packers WR Davante Adams a couple months later. It's so hard to like these guys.


Did any of you watch How I Met Your Mother? I was a huge fan of the show, but one thing always bothered me... 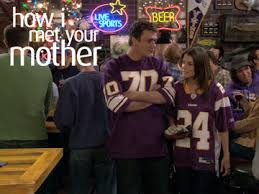 Marshall is from Minnesota, so he's a Vikings fan. No issue there. But he and his brothers invented an ice-based sport called Bask-ice-Ball. Which was basically basketball on ice because apparently there are no other sports played on ice.

And instead of Marshall and Canadian-born Robin bonding over hockey they bond over... football? Made no sense to me given that Minnesota is the State of Hockey.

When my wife and I started dating she brought home some swag from her trip to the Twin Cities-including a Minnesota Wild bumper sticker, magnet, and Inaugural Season yearbook, which I will dig out in the next day or two.

I've had a lot of luck pulling Minnesota Wild cards, including this Pierre-Marc Bouchard from a blister pack of 2007-08 Black Diamond: 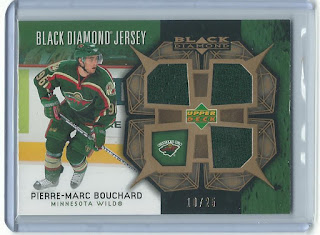 And not one but two high-end Marian Gaborik cards, which I sold almost immediately. 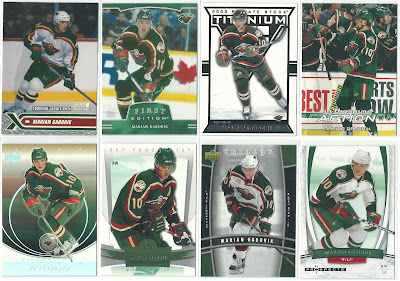 The first was a Titanium RC numbered to 99; I think I got about $100 for it but its value peaked at $300 when he led the Wild to the Conference Final in 2003. I also pulled a "sick hit" from a box of 2005-06 Black Diamond (I really liked the BD brand back then) It was a one of one autograph - and I didn't even realize it at first glance. 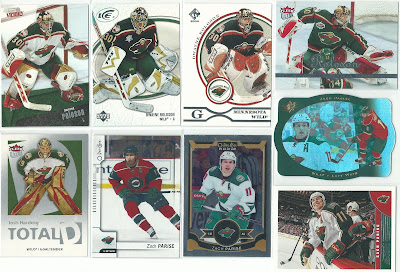 Dwayne Roloson split time with Manny Fernandez in Minny, until the Oilers traded a 1st round pick for him in 2006. The Oilers rode Roli to the Stanley Cup final that year.

Zach Parise and Ryan Suter signed $100+ million contracts with the Wild right before the 2012 lockout, during which the Wild owner cried about skyrocketing salaries. Not only that, Wild special assistant Lou Nanne declared that Parise was going to sign well before he was officially allowed to - but the NHL was not about to award the Devils compensation from another team for tampering with a player they were going to lose anyway. 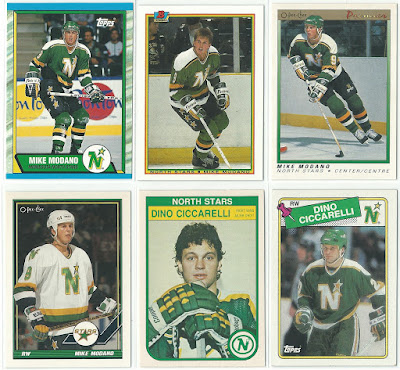 I was just starting to follow hockey in 1991, when the North Stars went on a Cinderella run to the Stanley Cup final. I don't think I watched any games but I checked the box scores every day to see if the North Stars could keep it going. The possibility of a team with a losing record winning a championship was fascinating to me. 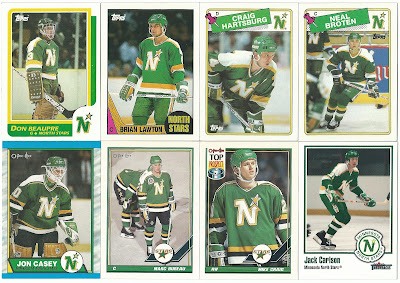 Unfortunately the Penguins shut them down in six games. Mario Lemieux saved one franchise but he had a hand in killing another; the North Stars moved to Dallas two years later.

I assumed that the expansion-era Timberwolves shared the Met Center with the North Stars but they actually played their inaugural season in the Metrodome. 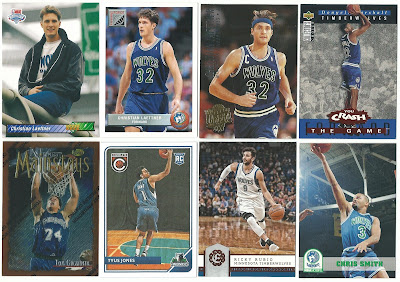 The Wolves struggled into the mid-'90s, when Kevin Garnett arrived out of High School. The "Big Ticket" led Minny to seven straight playoff appearances-and six straight first round exits-before their Conference Finals appearance in '04. 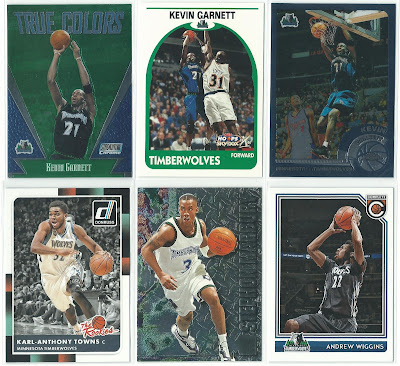 I used to have a Stephon Marbury Collector's Choice card that showed him walking through snow on the back of the card. Billy, do you know the card I'm talking about?

The Wolves recently changed their logo-which looked very familiar to some in the hockey world.


.@Timberwolves we like your style. pic.twitter.com/Of0FqXP3yT
— Arizona Coyotes (@ArizonaCoyotes) April 12, 2017

Favorite Vikings Player: I wouldn't say they're favorites but I'll keep an eye on Kirk Cousins and 40 year-old Terrence Newman