The first jersey I ever owned was a Lou Brock Cardinals throwback I picked off the rack at a store in Cooperstown. The last jersey I bought was a Wayne Gretzky Oilers throwback from the NHL store in Manhattan. In between I've probably owned at least 40 pro sports jerseys. Many of them were Christmas gifts.


My sister bought me the first hockey jersey I ever owned. It was a white Penguins jersey from the Lemieux/Jagr days. I never liked the Pens, so she took me to the hockey shop downtown so I could exchange it. My eyes lit up when I saw this sweater:

As a young sports fan, I was always interested in out-of-market teams and players. This jersey was bright red and random and I loved it. My brother's friend saw me wearing it once and he said "Calgary?" all confused because why would a kid from Connecticut want a Calgary Flames jersey? Unfortunately it didn't last long, the material was cheap and it pilled pretty bad. I had to trash it within a year.

That experience soured me from shopping for hockey jerseys - but not sports jerseys in general. Two of my all-time favorites were Christmas gifts from Mom, including this Hakeem Olajuwon jersey: 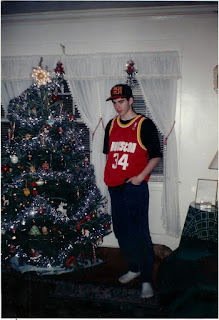 Again with the red and yellow. I held onto this jersey for about 15 years, even after I'd stopped following basketball. I sold it on eBay when throwback jerseys were all the rage.

The other jersey my mom bought me that year was a Sterling Sharpe Packers jersey exactly like this one: 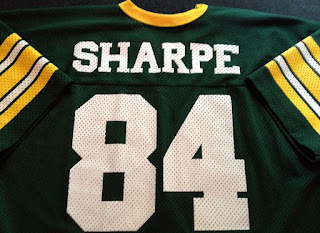 I wore my Sharpe jersey so much that the lettering cracked until it was barely recognizable. Couldn't bring myself to throw it out though; I buried it in a storage container along with a Rick Mirer Seahawks jersey, possibly my Hideo Nomo Dodgers jersey, and some other sports team apparel I've long outgrown.

Since Sterling's career came to an abrupt end in 1995 I was never able to replace this jersey. I've had plenty of other Packers jerseys - including Dorsey Levens and Bill Schroeder (which were under $20 each IIRC) and at least three Brett Favre jerseys. 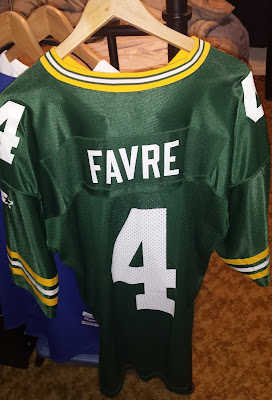 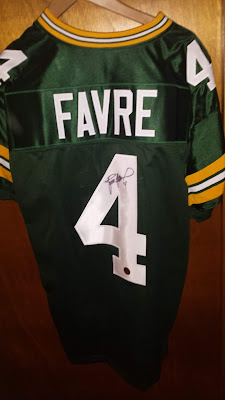 These were not Christmas gifts, but many others were. My brother bought me a Dan Marino jersey that I absolutely loved. There was just one problem with it .. it was huge!


I was probably a size L back then but I always bought XL jerseys whenever possible. The Marino jersey my brother gifted me was like an XXL, 52-56. I was swimming in it. Still, I wore it over a turtleneck and kept it in my closet for about ten years.

I can't really blame him for misjudging my jersey size. I've done it myself. Once I bought a Bryant Reeves Vancouver Grizzlies jersey in the mall right off the rack. When I tried it on at home it was too small (I think it was an L.) They didn't have a bigger "Big Country" jersey so I couldn't exchange it. In Chicago, I bought an authentic Mark Prior jersey that would be a perfect fit for a 6' 5", 230-lb pitcher but was way too big for my 6' 1", 190-lb (at the time) frame. 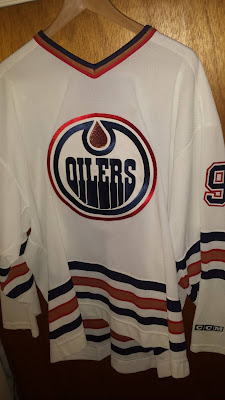 Here's one more jersey I got as a Christmas gift. One of my favorite Christmas traditions was thumbing through all the catalogs that would come in the mail. My source for hockey memorabilia was River City Sports in Canada, which is where my mom ordered this Ryan Smyth jersey for me.

I haven't bought a new jersey in about a decade and I don't see myself buying one for a long time, if ever. The RBK line of NHL jerseys were a complete turn-off, with the patch on the front and the rounded bottoms. Yuck. Pass. The NBA jerseys have ads now, and players in all sports (except football) change teams even more than they did a decade ago.

If I didn't already have a closet full of jerseys, a mortgage, and two kids I might consider buying a Damian Lillard Blazers jersey, or a Milwaukee Bucks throwback. It's shameful that I don't already have an Aaron Rodgers jersey, and I could be talked into purchasing a P.K. Subban Devils sweater - even though he has not lived up to the hype at all.

How many sports jerseys do you own? Did you get any as Christmas gifts? If you could have any player's jersey - past or present - who would you choose?