When I was 19, I worked as a seasonal employee at Kay-Bee Toys. It was my first official job (I had only worked for my mom's office cleaning company up to that point) and it was a fun experience. However, we had to listen to the same Christmas songs over and over and over again. All day. Every day. For six weeks. Some of them were pretty standard, while others were just different enough to get stuck in my head 20 years later.

My brother in-law and his group of friends had a tradition of making each other mix CDs for Christmas, with a track list based on certain criteria such as "A song with a color in the title", "An Elvis song", "A song from a movie", and so on. He passed this tradition on to the family, and we exchanged mix CDs for a few years - until YouTube came along and made us all lazy. 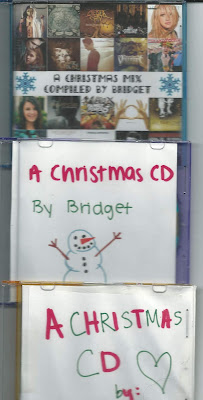 I have to admit I rarely listened to their CDs. The fun was in making the mix for everyone else. There were a few bands my wife's sister and nieces like that I either liked already or got into because of them - and there are a couple killer tracks on the CDs scanned above.


That said, their musical gift-giving pales in comparison to my lifelong friends. Sometimes we made each other mix CDs, and sometimes we bought proper albums to gift each other. Often I had never even heard of the bands that John or Joe recommended. Most of them were from Scandinavia - which might explain why they always put me in a wintry mood. Here are some of my favorites:

Mew is a band from Denmark that I listened to a lot in college. One semester in particular started in January. I crushed pretty hard on a girl that was way out of my league but much closer in physical proximity (she sat in the row next to me.)

This track always brings back memories of walking home in the snow with that gorgeous girl on my mind.


They also have a song called "She Came Home For Christmas" that's just about the saddest thing ever. (okay maybe not, but it is very emotional.)


I may have mentioned Kent before; they're a Swedish band that I started listening to in the late 1990s (I think they've broken up recently?) This was one song my wife liked a lot when we first started dating. The English lyrics aren't super brilliant, but the music is absolutely beautiful.


Allmusic.com compares Kent to Coldplay and Muse - which explains why I was such a fan.


If you want to hear a wintry Nordic song in the original dialect, here's Iceland's Sigur Ros:

Not to sound all "Bah Humbug" but I don't really have a favorite Christmas carol and I'm indifferent about the holiday standards. The only festive music I enjoyed listening to came from Trans-Siberian Orchestra CDs that I bought Mom as a Christmas gift.

I'll have to see if she still has this CD so we can listen to it when I come home for (almost) Christmas this weekend.

Do you have a favorite holiday song? Or a favorite non-holiday winter song?