The NBA Finals could end tonight (now that I've typed that, they probably won't) and the NHL Expansion Draft is tomorrow. I'm very excited about the Seattle Kraken. I've already ordered a hat and I'm going to wear it at work. Not that anyone will know what it is.

I'm not ready to get back into baseball. I'm not sure if I'll ever be a fan of the game the way I was in the before time. I see a lot of comments on blogs and message boards from folks who have stopped following the NFL or NBA (or NHL) because the sport doesn't resemble the one they grew up with. My father in law used to say the same thing about Nascar. It's not the same. Too many rule changes.

That's how I feel about baseball. It's really hard for me to care about the sport when every other day seems to bring some bad news. Meanwhile, exciting things are happening in hoops and hockey - and football is just around the corner.

Even though I've become disenchanted with the product on the field I'm still collecting baseball cards. I kinda have to if I want anyone to read this blog lol. I've requested a blaster of 2021 Stadium Club for my birthday and I've got a small stack incoming from a Nachos Grande box break. 2022 Topps looks interesting. I may have to consider ending my self-imposed set building freeze once that his shelves.

Until then, here are some newly-acquired cards of some of the greatest players in baseball history. I bought two of them for pocket change. The other two cost me nearly four figures.

I had a small amount of eBay bucks to spend and picked up a long-lost single from my childhood: 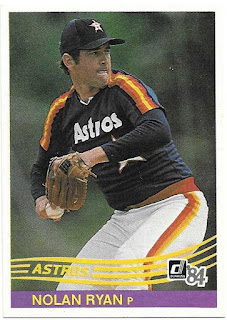 This 1984 Donruss Nolan Ryan was one of my most cherished and valuable singles as a kid. I'd kept it in a Card Saver holder, stored it... somewhere.. and then lost it more than 30 years ago. I'm not a Nolan Ryan collector at all but this is one I've been meaning to pick up ever since then, and it only cost $1.76.

The seller only charged $0.99 shipping and adding an extra card was free, so I checked their other auctions. Didn't see anything I had to have but decided to put a low bid on a 1980 Topps Mike Schmidt. I once had a PSA Mint 9 copy of this card when I was collecting World Series champions. 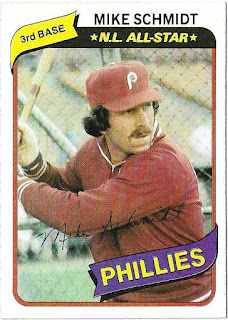 And now this card has returned to my collection, for just one dollar. After the eBay Bucks I spent $1.25 total.


The '80 Schmidt and '84 Ryan were two of the most recent cards on a vintage wantlist I'd created. In the spring I sold over $5,000 worth of items on eBay. I banked over $3,000 for home improvements, set aside $1,000 on a new couch for our living room, and I allowed myself to spend the rest on one high-value vintage card.

After another fruitless search for a high-grade Robin Yount rookie card I narrowed my focus to two cards: a 1960 Topps Mickey Mantle and a 1971 Topps Roberto Clemente. This was a tough decision. 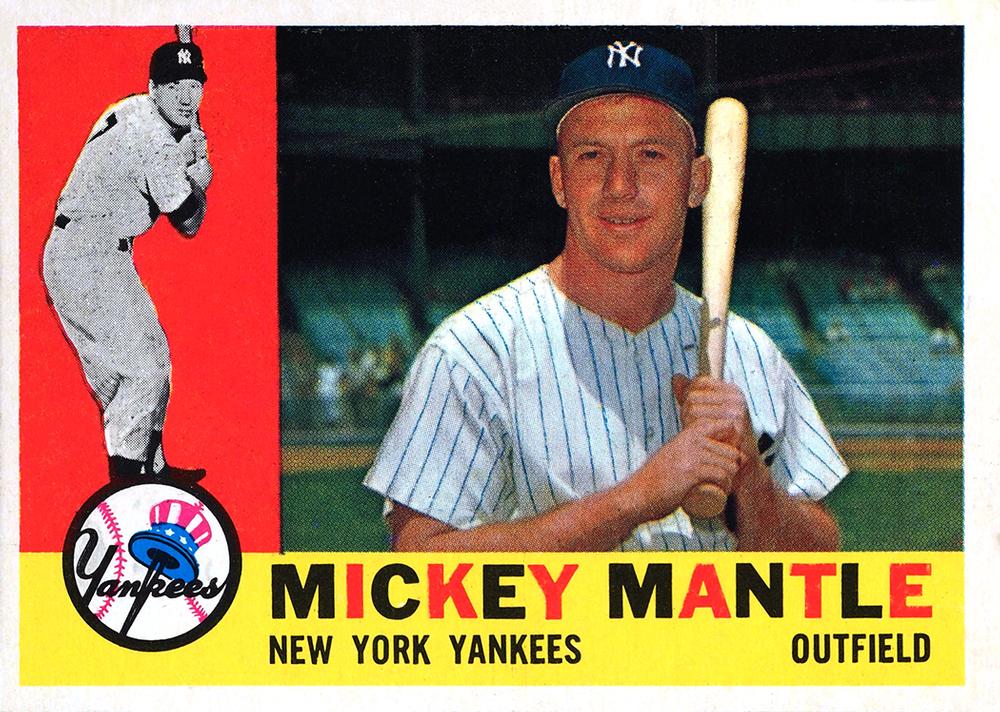 I'm not a fan of the 1960 Topps set at all. One of the first price guides I ever owned wrote a feature story calling it "major league ugly" - and I agreed. However one of the few singles I like in the set is of course the Mantle, which is also one of the best looking vintage issues of "The Mick" in my opinion. 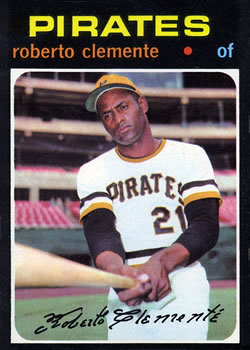 On the other hand, the 1971 Topps set is more attractive - if a bit dull. Clemente led the Pirates to a World Series victory in both '60 and '71, and I'd much rather have his '71 single. The black borders pair nicely with the Pirates uniform - and he's properly identified as Roberto rather than "Bob" on the newer card. 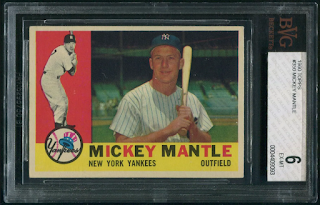 These particular copies had their pros and cons as well. The Mantle was a BVG 6. I have never bought a Beckett-graded vintage single; I've always been loyal to PSA for older cards. However I've been very annoyed with them lately. If this were slabbed by PSA - in a 5 or a 6 - it would sell for a lot more. 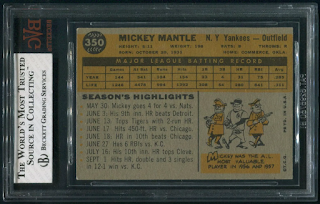 Dave and Adam's had the Mantle - along with a 1972 Topps Hank Aaron I'd had my eye on. If I bought from D & A I wouldn't have to pay tax, and I'd probably get the cards faster. But it would cost more. 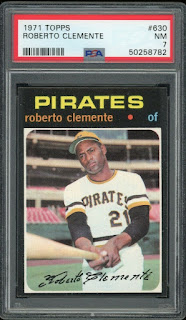 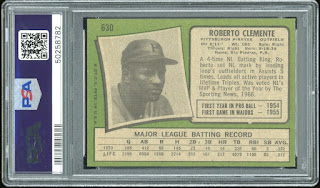 Clemente was listed by a prominent eBay seller (not Probstein or PWCC or any of those jokers.) This card was sharp. It was also $100 cheaper than the Mantle - but once tax was attached the savings would be negligible. This particular copy was the nicest '7' I'd ever seen - the centering was a bit off but more than acceptable for my money. I'd asked my wife for her opinion and she agreed the Clemente was much nicer than the Mantle.


All things being equal, I'd choose Roberto. But how do I pass up a vintage mid-grade Mickey? I deliberated all night, and planned to decide before going to bed.

The decision was made for me.

Someone bought the Roberto Clemente card. I quickly headed to D & A to snatch the Mantle - and the Aaron.

I know I'll never see another '71 Clemente in my price range that looks as clean as that one did. The borders on that card were immaculate. But I'm thrilled to add another Mantle - and another Aaron - to my collection. 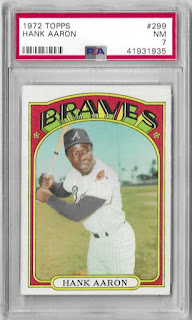