PWEs for me, PWEs for you

It's Day 12 of NBA week and I've got one more post for you before the basketball content comes to a close. In case you missed it I discussed the Phoenix Suns, Gheorghe Mureșan, and Reggie Lewis over at The 1993. 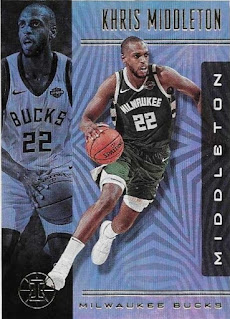 Here at the flagship, NBA week tipped off with an All-Star squad of recent Second Round draft picks (Including Khris Middleton.) We discussed the card-less 1982-83 NBA season and reviewed Fleer and Hoops offerings from 1989-90.

The seventh post of the series will focus on my favorite active basketball player. You may be familiar with my favorite retired stars since they are popping up frequently in the PWEs I've received so far. Two more arrived this week, one from Dennis (Too Many Verlanders) which was heavy on 1999-00 Ultra and players I collect: 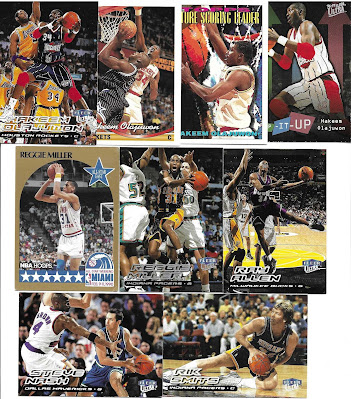 ...and one from AJ (the Lost Collector), which was a lot more random. 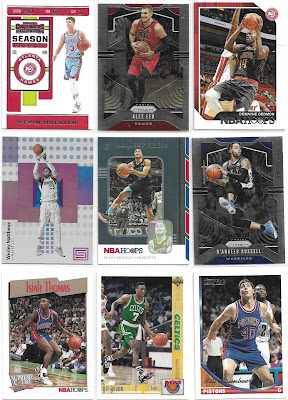 I'm always happy to increase my player PC count but I do love a good potpourri PWE. Thank you Dennis and AJ! 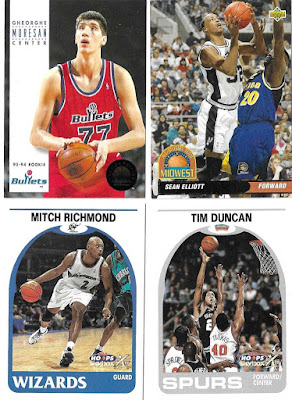 These arrived from Sportlots. I've mentioned all of them except the Sean Elliott in previous NBA Week posts.

Now that you've seen what I've received so far in this PWE Swap Meet, it's time to discuss what I'll be sending. I'm preparing up to 40 12-card PWE strips for claiming, but I have a question: should I group some PWEs by team, by set, by year, or by brand? Or would you prefer random samplings of various sets? Most of the 3-pocket pages will be one-sport, so if you want baseball you'll get 12 baseball cards - not some hidden hockey from 1991 lol.

Let me know what you think. I will probably scan and post the PWEs for you to claim on Saturday at noon. Hopefully that works for everyone involved.

Thanks for reading, and Gooo Suns! ;P

Email ThisBlogThis!Share to TwitterShare to FacebookShare to Pinterest
Labels: PWE swap meet, The Lost Collector, Too Many Verlanders