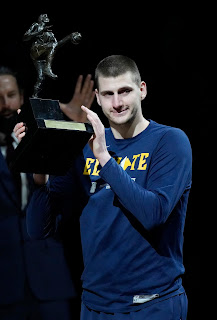 Denver Nuggets center Nikola Jokic is the 2021 NBA MVP, the first player in franchise history to win the award. The 41st overall pick in 2014, Jokic is the lowest-drafted Most Valuable Player ever - by a lot. In fact the previously lowest-drafted players to win regular season MVP honors were two players I like and collect: Steve Nash and Giannis Antetokounmpo, who were both chosen 15th overall.

Not only is the "Joker" the first second-round pick to earn MVP honors, there hasn't even been an MVP selected in the second half of the first round. Nash was drafted in the exact middle of the 1st round in 1996.

I thought it would be fun to build a 12-man roster of only second round picks from the 21st century. Obviously Jokic is our starting center.. but what other stars were selected with second-round draft choices?

Let's meet your Second Round All-Stars!

Most Win Shares of any 2014 draftee by far


Jokic is already one of the top five players in Denver Nuggets history. Possibly even top three.

Fourth among 2012 draftees in Win Shares and Rebounds Per Game

I initially had Paul Millsap here but an all-time great defender like Dray would go to waste on the bench.

Middleton is another player on my NBA PC list hint hint. I like his all-around game more than Giannis's, and he shares my birthday (and my first name). However I'm not quite ready to spend $40 on one of his cards ... yet.

Three-time All-star is third among Wizards in Win Shares

NBA's third-leading scorer in 2006-07, behind only Kobe and LeBron


Before blowing out his knee (and bringing his collection of firearms to work) "Agent Zero" was an unstoppable offensive force. His presence in this lineup makes it easier to start a low-scoring defensive specialist like Green.


By the way, all of the cards in this post are from my personal collection - which is why there's a Panini Complete single here instead of something more interesting.


The Second Round All-Stars have a lot of talented big men coming off the bench....

Leading rebounder among all 2008 draftees, second in Win Shares and RPG

Good luck finding enough minutes for Jokic, Gasol, and Jordan in the frontcourt.

Has played in more playoff games than Chris Paul,  but none in the NBA Finals

Hockey has the "OGWAC" or Old Guy Without a Cup. If the NBA has an "OGWAR" I'm nominating Millsap to be next in line.

Signed with the Nets after playing three seasons in Turkey


There aren't a lot of small forward finds among second rounders and I prefer Bojan's shooting ability and career arc over lower-ceiling players like Jae Crowder and Trevor Ariza. Check back in two years, I might have Jerami Grant in this spot.

Second among all 2008 draftees in total assists, third in APG

Fifth among 2016 draftees in Win Shares and PPG, second in assists and APG

I would have liked to add a three-point specialist like Kyle Korver to this roster, but there were too many quality players ahead of him.

NBA Week will be off tomorrow for Independence Day (woo-hoo! we're still a democracy!) but we'll be back on Monday with a look at another second round pick - from the 1993 Draft.

Thanks for reading, and Go Bucks!