Let's fast forward a few years from the barren basketball card wasteland of 1982 to 1989 [cue Public Enemy's "Fight The Power"]  There are now two NBA sets to collect! 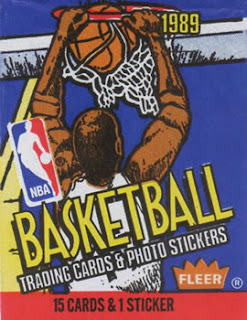 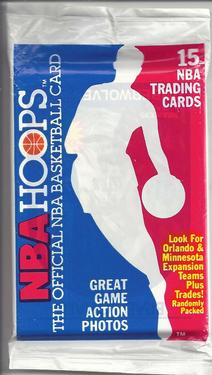 Fleer now faced competition from NBA Hoops, whose initial set was much bigger and more plentiful (at least in my observation.) Fleer had the brand recognition and the extra sticker-card, but they did not have a David Robinson rookie card. Hoops had two cards of the Admiral.

Aside from that one random pack of 1988-89 Fleer my dad brought home one day, my first real exposure to basketball cards was the 1989-90 Hoops set. A card shop near my house had the top stars sleeved and priced in a showcase - many were 50 cents each, Larry Bird and Magic Johnson were probably a buck or more. I think Michael Jordan was $3 even back then.

I don't recall seeing any Fleer singles or packs for sale in 1989.

With both base sets and the 11-card Fleer All-Star Stickers set complete, I wondered if there were any other cards I needed to complete the run of 1989 NBA sets. It's not as easy as I thought:

1989-90 Fleer has three error cards - both John Williamses have wrong back variations and Gerald Wilkins has a tough variation that spells out "University of Tennessee" on the back.

1989-90 Hoops has six error cards, two checklists, 42 announcer cards.. and there's also a set of 100 Superstars with a yellow background - though TCDB lists that as a 1990 release.

This is a much smaller set at 180 cards. There are no expensive rookie cards, and Michael Jordan was in the middle of one of his five or six retirements so I don't have to worry about him. The only card that will cost more than a dollar is the Kobe Bryant base single.

I've got a Richmond and a Tim Duncan card incoming from Sporlots, which will leave me 81 cards short of completing the 1999-00 Hoops Decade set.

There is one more '89-adjacent basketball set to discuss. Fleer paid tribute to their 1989-90 set with 2002-03 Fleer Tradition, a 300-card set that includes two Michael Jordan cards and two Kobe Bryant cards. Also Yao Ming appears on three rookie cards for some reason.

The border colors are sharper but the background is blurry. The cards almost look photoshopped (and maybe they are?) One thing I do like about the '02-03 Fleer Tradition set is the color-matching backs:

Much better than that gross reddish-pinkish color on the backs of every 1989-90 Fleer card.

Just for fun I decided to cross-check both Fleer sets to see how many players appeared in 1989-90 and 2002-03. There are eight: Horace Grant, Mark Jackson, Michael Jordan, Karl Malone, Reggie Miller, Scottie Pippen, John Stockton, and Rod Strickland.

In the early aughts it was still a fairly novel concept to give an old design a fresh coat of paint. Today, trading card companies - especially Topps and Upper Deck - recycle old designs so often that you have to wonder what they'll use as a "tribute" twenty years from now. I've started to avoid these cards whenever possible but there are designs that I don't mind seeing updated, such as 1985 Topps baseball and 1993 SP anything.

Do you have a favorite basketball card set design? Do you like or dislike "tribute" sets in general?


Thanks for reading, and LET'S GO SUNS!!!