Today's team was the first expansion franchise (and the second, and the third) to play in a Stanley Cup final. Here's the all-time roster for the St. Louis Blues:

Left Wing - Pavol Demitra Originally an Ottawa Senator, Pavol Demitra matured into a point-a-game player for the Blues after a 1996 trade. A three-time All-Star, Demitra is sixth in Blues history with 493 points (in 494 games) and finished sixth in the NHL with a career-high 93 points in 2002-03. He led the league with 10 game-winning goals a year earlier and captured the Lady Byng trophy in 2000.

Center - Bernie Federko The seventh overall pick in the 1976 draft, Hall of Famer Bernie Federko leads all Blues in games played (927), assists (721) and points (1,073). An All-Star in 1980 and 1981, Bernie posted four seasons of 100+ points, including three in a row from 1984 to 1986. In the spring of '86 Federko shared the league with 21 postseason points while leading St. Louis to within one win of the Stanley Cup final.
Right Wing - Brett Hull The leading goal scorer in St. Louis history, Brett Hull's 741 career goals are the fourth-highest total of all time. The "Golden Brett" posted the Blues' top five single-season goal totals and his 86 goals in 1990-91 are the third-highest total in NHL history. The Hall of Famer won the Hart trophy that year and won the first of his two Stanley Cups in 1999, a year after leaving the Blues.

Left Wing - Brian Sutter The Blues' captain from 1979 to 1988, Brian Sutter ranks third in franchise history with 779 games played, 303 goals, 107 power play goals, and 636 points. A three-time All-Star and two-time 40-goal scorer, Sutter has the highest penalty minute total in St. Louis history with 1,786 PIMs. Upon his retirement as a player in 1988 he was named the Blues' head coach. Three years later he won the Jack Adams award.

Center - Garry Unger The NHL's iron man for over a decade, Garry Unger didn't miss a game due to injury from 1968 to 1980. In 662 games with St. Louis Unger scored 292 goals and 575 total points - the fourth-highest totals in Blues history. The seven-time All-Star potted 30 or more goals every season from 1972 to 1979. Only Hull and Demitra have more than Garry's 40 game-winning goals for the Blues.

Right Wing - Vladimir Tarasenko The Blues' first round pick in 2010, Vladimir Tarasenko ranks fifth on the team's all-time list for goals, power play goals, and offensive point shares. A three-time All-Star, Vladimir posted five consecutive 30-goal seasons from 2015 to 2019, culminating in a Stanley Cup victory. Multiple shoulder surgeries have sidelined the Russian star for much of the past year.

Left Wing - Jorgen Pettersson In just five seasons with St. Louis, Jorgen Pettersson tallied 161 goals - the 12th-highest total in team history. 120 of those goals were scored at even-strength; only ten players in Blues history have more 5-on-5 goals. The Swedish winger totaled 332 points in 365 contests as a Blue, for a points per game average of 0.91.

Center - Alex Steen Toronto's first-round pick in 2002, Alexander Steen ranks second in his draft class with 377 assists and 622 points. In his 12 seasons with the Blues, Steen piled up 301 assists (sixth in franchise history) and 496 points (fifth in St. Louis annals). He announced his retirement in December after 15 seasons in the NHL.

Right Wing - T.J. Oshie The Blues' first round pick in 2005, T.J. Oshie spent the first seven seasons of his career in St. Louis before a 2015 trade to the Capitals. As a Blue, the American forward compiled 310 points in 443 games and ranks eighth in Blues annals with a plus/minus rating of +71. Initially I had Joe Mullen in this slot but the Hall of Famer played just 301 games as a Blue and if I included him then I would have to include Pierre Turgeon - who scored more points and played more games for St. Louis than Mullen did.

Left Wing - David Perron Currently in his third stint with St. Louis, David Perron was the team's third first-round pick in 2007. The two-time 60-point scorer continues to climb the Blues leader boards in his 14th NHL season. Perron is currently 17th in St. Louis annals with 353 points but he could move up to 14th in a matter of days.

Center - David Backes A valuable two-way forward in his decade with the Blues, David Backes suited up for St. Louis 727 times, the seventh-highest total in team history. His 206 goals and 460 points rank seventh in Blues' annals and only four players have spent more time in the sin bin as a Blue. Backes is tenth in team history with 254 assists and tied for ninth in plus/minus with a +65 rating. The 14-year veteran played 15 playoff games for Boston in 2019 - including four times against his old team in the Cup final.

Right Wing - Wayne Babych In just 396 games for the Blues Wayne Babych scored 155 goals, including 111 at even-strength - the 14th-highest total in team history. The first Blues player to score 50 goals in a season, Babych netted 54 goals including a league-leading 40 at even-strength in 1980-81. His production cratered after tearing his rotator cuff in a preseason game when a referee held him back from a fight.

The Blues' leading scorer in their first two seasons, Red Berenson remains tenth in team history with 172 goals. A four-time Stanley Cup finalist, Red earned a ring with the Montreal Canadiens in 1965. He ranks 11th in team history with 240 assists and 12th in points with 412. As head coach of the Blues, Berenson earned 100 wins in just 204 games. Schwartz is in his ninth full season with St. Louis. The five-time 50-point scorer ranks right behind Berenson on the team's scoring list and is set to pass Alex Pietrangelo for fifth place in plus/minus.

Pronger played half of his Hall of Fame career in St. Louis, where he won the Norris trophy as top defenseman and the Hart trophy as league MVP in 2000. The Blues' all-time leader in plus/minus with a +140 rating, Pronger is sixth in team annals with 931 penalty minutes and fourth in point shares with 76.9. Pietrangelo captained the Cup-winning 2019 team and left the Blues a year later as their all-time leader in defensive point shares. The fourth overall pick in 2008 is ninth in Blues' annals with 450 points and his 341 assists are third in team history.

Kevin Shattenkirk - Barclay Plager
Kevin Shattenkirk has posted six seasons of over 40 points including a career-high 56 in 2016-17. His 199 assists in 425 games for the Blues rank sixth among blueliners in team history, and he's ninth in team annals with 23.1 defensive point shares. Barclay Plager ranks third in Blues history with 1,115 penalty minutes and fifth in DPS with 39.6. He served as team captain from 1970 to 1976 and played alongside brothers Bill and Bob in St. Louis.

The first overall pick by the Rockies in the 1979 draft, Rob Ramage registered 60 or more points in a season three times and earned four All-Star nods in his 15-year career. The two-time Stanley Cup champion ranks seventh in Blues' annals with 898 penalty minutes and his 229 assists are 12th among St. Louis players. Barret Jackman was the Blues' first round pick in 1999. He ranks second in St. Louis history with 803 games played, fourth in DPS with 41.9 and fourth in penalty minutes with 1,026.

Another player who made a big impact on the Blues in a short amount of time, Paul Cavallini played just 337 games for the team yet he posted the third-highest plus/minus rating (+99) and the tenth-highest defensive point shares score (22.8) in team history. His 0.47 points per game average for the Blues is twice that of Bob Plager, who ranks tenth in team annals with 616 games played and 760 penalty minutes.

Curtis Joseph led the league in saves three straight years from 1992 to 1994 and his 162 goals saved above average is the best in Blues history by far. "CuJo" had better years elsewhere, however the only other team he qualified for was Toronto - and the Leafs have better options in net. Mike Liut faced a similarly high volume of shots in an equally offense-friendly era. The 1981 Hart trophy runner-up won the Pearson award as the players' choice for MVP. He led the league in saves a season later.
Jake Allen deserves an honorable mention here, as he slots in between Liut and Joseph on the Blues' games played and wins lists. He ranks ahead of both greats in goals against average and save percentage - but he's far behind in point shares for the franchise and his resume doesn't match up to either player. 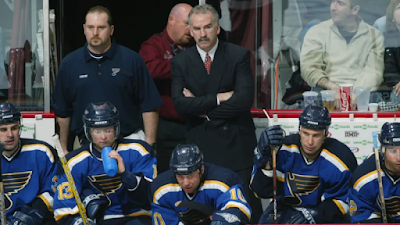 Joel Quenneville and Ken Hitchcock are the only two coaches who spent more than four seasons behind the Blues' bench. Hitchcock has a better winning percentage but "Coach Q" has more regular season and playoff victories for the Blues. The current bench boss of the Florida Panthers was also named head coach of the Blackhawks' All-Time Team.

I hope you'll join us tomorrow for our next All-Time Team, the San Jose Sharks.