Today's team won five Stanley Cups in their first eleven seasons in the NHL and they're the first franchise outside the Original Six to capture five Cups. Here's the All-Time roster for the Edmonton Oilers: 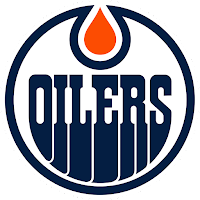 Left Wing - Mark Messier Six time Stanley Cup champion and two-time NHL MVP is third on the NHL's all-time list with 1,193 assists and 1,887 points. Second to Gordie Howe on the all-time games played list with 1,756 - just 11 fewer than "Mr. Hockey". Captained the Oilers to a fifth Stanley Cup - and first without Wayne Gretzky - in 1990. Messier's impact on the Rangers may have been even greater but  his points per game average, era-adjusted scoring, and point shares totals were all higher in Edmonton.

Center - Wayne Gretzky The most prolific scorer in hockey history by far, Wayne Gretzky rewrote the NHL record books in the 1980s. The "Great One" won ten scoring titles, nine MVP awards (eight consecutive), led the league in assists for thirteen straight seasons, and broke Gordie Howe's goals record when he was just 33 years old. If Gretzky had never scored an NHL goal, his assists alone would be enough to hold the league's scoring record. He is the only player to score 200 points in a season - and he did it four times.

Right Wing - Jari Kurri The first superstar and hockey Hall of Famer from Finland, Jari Kurri thrived on Wayne Gretzky's wing in Edmonton and Los Angeles. A five-time Stanley Cup champion and 600-goal scorer, Kurri is second to Gretzky in Oilers' annals with 474 goals, 1,043 points, and a +373 plus/minus rating. He ranks 21st in NHL history with 1,398 points and 20th in points per game with 1.118.

Left Wing - Ryan Smyth A hard-nosed grinder who excelled on the power play, Ryan Smyth is second on the Oilers' all-time list with 971 games played and shares the franchise record for career power play goals with another player on this line. The 6th overall pick in 1994, Smyth posted four seasons of over 30 goals including a career-high 39 in 1996-97. He led the NHL with 20 man-advantage markers that season and helped the Oilers upset the heavily-favored Dallas Stars in the '97 playoffs.

Center - Connor McDavid The first overall pick in 2015, Connor McDavid is already ninth in Oilers history with 469 points and his points per game average trails only Gretzky and Kurri. "McJesus" has already won a Hart trophy, two Art Ross trophies, and posted over 100 points in each of his three full seasons. #97 tallied 97 points in 2019-20 and surely would have broken the century mark a fourth time had the campaign not been cut short by Covid.

Left Wing - Esa Tikkanen A super pest with a scoring touch, Tikkanen is eighth on Edmonton's all-time list with 178 goals and tied for ninth with 121 even-strength goals. A four-time Selke finalist for defensive excellence, the Finnish forward racked up three seasons of 30+ goals and three 70+ point campaigns in his stellar career. Esa elevated his game in the postseason, averaging 0.39 goals per game compared to his regular season average of 0.28.
Center - Doug Weight Acquired from the Rangers in a 1993 trade for Tikkanen, Doug Weight led the rebuilding Oilers back to respectability in the mid-late '90s. The four-time All-Star sits sixth in Oilers' annals with 420 assists and seventh with 577 points. He won a Stanley Cup against his old team in 2006, scored his 1,000th NHL point for the Islanders in 2009, and closed out his career with the King Clancy trophy in 2011.

Right Wing - Ales Hemsky Playmaking winger is eighth in Edmonton annals with 477 points and tied with Ryan Smyth for seventh in assists with 335 - in 319 fewer games. Tallied a team-leading 58 assists and 77 points in the 2005-06 season, then added 17 posteason points for the Western Conference champions.

Left Wing - Taylor Hall Taylor's tenure in Oil country was brief and injury-filled, but the first overall pick in 2010 remains a top tier player when healthy. Hall has averaged 0.90 points per game over his ten year career, won a Hart trophy with the Devils in 2018, and has a higher era-adjusted point total for Edmonton than Esa Tikkanen. He is also something of a good luck charm as his teams have won the draft lottery six times - including his own selection.

Center - Leon Draisaitl The NHL's leading scorer and MVP in 2019-20, Leon Draisaitl is already in the Oilers' top ten in goals with 168 and his 422 points are 13th in team history. The German star has a career points per game average of exactly 1.00 - eighth all-time among Oilers - and only four of his countrymen have scored more NHL points.

Right Wing - Jordan Eberle Currently a New York Islander, Jordan Eberle spent the first seven seasons of his career in Edmonton. The Oilers' first-round pick in 2008 is 15th in team history with 382 points and 11th with 165 goals. Only two players scored more goals for the franchise in fewer games than Eberle's 507 appearances.

Another one of Edmonton's first overall picks (in 2011), Hopkins finished second to Gabriel Landeskog in Calder voting despite tying the Avalanche star for the league lead in rookie scoring. He's currently one goal ahead of Draisaitl for ninth on the Oilers' career goals list and set a career high with 0.96 points per game in 2019-20, posting 61 points in 65 contests. Simpson is seventh in Edmonton annals with 185 goals and his 25.3 shooting percentage is the highest mark in franchise history.

Paul Coffey - Kevin Lowe
Though he stayed in Alberta for just seven seasons and 532 games, Paul Coffey is fifth in Oilers history with 460 assists and 669 points. The Hall of Famer won two of his three Norris trophies and three of his four Stanley Cups for the franchise. In 1985-86 Coffey broke Bobby Orr's single-season record for goals by a defensemen with 48 and nearly broke Orr's single-season points record. Lowe wore the Oil drop more times than any player, suiting up for the team 1,037 times. The Hall of Famer is fifth in franchise history with a career plus/minus rating of +240 and leads all Oilers with a 50.1 DPS.

Charlie Huddy - Steve Smith
Charlie Huddy is second in Oilers' annals with 36.1 defensive point shares, fourth in plus/minus with a +245 rating, and tenth in games played with 694. The undrafted free agent played in seven Stanley Cup finals, including all five Oilers victories. Smith is infamous for a Bill Buckner-esque blunder in the 1986 playoffs but his 16-year career included three Stanley Cup rings, three seasons of 40+ assists and 50+ points, and the highest single-season penalty minute total in Oilers history.

Randy Gregg - Jason Smith
Randy Gregg is tied for fifth among Oilers defensemen in points with 188 and ninth among all Oilers in plus/minus rating with +173. The five-time Stanley Cup champion played just 453 regular season games and 130 postseason contests for the Oilers while pursuing a medical degree. Jason Smith (no relation to Steve) served as the Oilers' captain from 2002 until 2007, including the team's Western Conference title-winning team in 2006. Only four Oilers blueliners earned more defensive point shares than Smith's 28.7.

Niinimaa is tied with Dr. Gregg for fifth among all Oilers blueliners with 188 points, which he compiled in a lower-scoring era and in 54 fewer games. The two-time Olympian for team Finland posted a career point shares score of 59.2 in ten NHL seasons, and his 23.2 DPS is eighth in Oilers annals. Lee Fogolin was strongly considered for his toughness and higher defenive ratings but I felt that this group could use another puck-mover that didn't play with Gretzky & co.

Hall of Famer Grant Fuhr is first among Oilers goalies in wins and he's Wayne Gretzky's all-time favorite black athlete. Fuhr's point shares score of 70.8 leads all Oilers goalies and ranks sixth among all players in franchise history. However he doesn't lead the franchise in goals against average, era-adjusted GAA, or shutouts. Those franchise records belong to Tommy Salo, an overworked and underrated netminder who lacked Fuhr's (and Bill Ranford's) ability to win big games but was statistically superior (at least to Ranford) in the regular season. 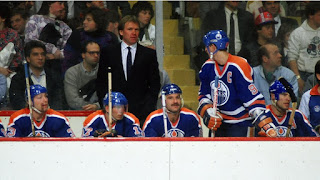 Hall of Famer Glen Sather coached the Oilers franchise for 14 seasons, including three in the WHA. The architect of Edmonton's dynasty as coach and GM "Slats" boasts the highest postseason winning percentage of any NHL head coach.

I hope you'll join us tomorrow for our next All-Time Team, the Florida Panthers.