Today's team has played in the most Stanley Cup finals of any franchise that has never won a championship. Here's the all-time roster for the Vancouver Canucks:

The Canucks were swept by the Islanders in the 1982 final. Vancouver pushed the Rangers to seven games in the 1994 final and lost another seven-game series to the Bruins in 2011.

Left Wing - Daniel Sedin Vancouver's all-time leader in goals with 393, Daniel Sedin was selected second overall by the Canucks in 1999. The NHL's leading scorer in 2011, Daniel leads the franchise in power play goals, game-winning goals, and point shares. He trails only twin brother Henrik for the franchise lead in games played, assists, points, and plus/minus rating.

Center - Henrik Sedin Drafted at the same time as his brother Daniel thanks to some maneuvering by GM Brian Burke, Henrik Sedin earned Hart trophy honors in 2010 after leading the NHL with 83 assists and 112 points. The two-time King Clancy trophy winner for community leadership leads all Canucks with 1,330 games played, 830 assists, 1,070 points, and a +165 rating.

Right Wing - Pavel Bure The only Hall of Famer on this all-time roster, Pavel Bure won the Calder trophy in 1992 after scoring 34 goals in 65 games as a rookie. The "Russian Rocket" followed that up with back-to-back 60-goal seasons, leading the league for the first of three times in 1993-94. Bure led all playoff scorers with 15 goals in 24 games for the Stanley Cup finalists that spring. He's the Canucks' career leader in goals per game, points per game, and short handed goals.

Left Wing - Markus Naslund Pittsburgh's first round pick in 1991, Markus Naslund flourished in Vancouver after a 1996 trade. A three-time 40-goal scorer, Naslund led the Canucks in scoring seven straight seasons from 1999 to 2006. The Swedish forward is second in Vancouver annals with 346 goals and third with 756 points. A five-time All-Star, Naslund won the Pearson award as the players' choice for MVP in 2002-03 after setting career highs with 48 goals and 104 points.

Center - Trevor Linden The second overall pick after Mike Modano in the 1988 draft, Trevor Linden was the heart and soul of the Canucks for sixteen seasons. A six-time 30-goal scorer, Linden captained the Canucks for seven seasons including the 1994 Western Conference champions. He ranks third in Canucks' annals in goals, assists, even-strength goals, and short-handed goals, and only the Sedin twins played more games for the franchise than the 1997 King Clancy honoree.

Right Wing - Stan Smyl Vancouver's captain prior to Trevor Linden, Stan Smyl ranks fourth among Canucks with 896 games played, 262 goals, 411 assists, and 175 even-strength goals. He trails only Gino Odjick and Garth Butcher on the franchise's penalty minutes list with 1,556. Smyl finished second in regular season and playoff scoring for the Canucks in 1982, helping the team reach the final for the first time.

Left Wing - Todd Bertuzzi A fearsome power forward in his eight seasons with the Canucks, Todd Bertuzzi bulldozed his way to the team's top ten in goals, assists, points, and penalty minutes. An NHL All-Star in 2003 and 2004, "Bert" set a career high with 46 goals in 2002-03, including a league-leading 25 power play goals while playing alongside an MVP finalist in Markus Naslund. The Islanders' 1st-round pick in 1993 played all three forward positions in New York so we'll move him to the left side to make room for another paesan.

Center - Thomas Gradin One of six Swedish players on this roster, Thomas Gradin ranks fifth in franchise history with 0.90 points per game, sixth in assists with 353, and sixth in points with 550. The leading regular season and postseason scorer of the 1982 Campbell Conference champions, Gradin scored 30 or more goals in a season three times from 1980 to 1983.

Right Wing - Tony Tanti Chicago's first round pick in the 1981 draft, Tony Tanti played just 43 games for the Blackhawks before a 1983 trade sent him to Vancouver. His 250 goals in 531 games as a Canuck averages out to 0.47 goals per game, the second-highest mark in franchise history. Only five Canucks have scored more goals than Tanti and his 102 power play markers are third in team history behind Daniel Sedin and Markus Naslund.

Center - Brendan Morrison Durable center for Bertuzzi and Naslund in the early '00s didn't miss a game for seven seasons from 2000-07. Only five Canucks have scored more game winning goals than Morrison's 30, and only Pavel Bure needed fewer games than Morrison's 543. The Michigan grad is tied for 12th in Vancouver history with 393 points and sits in 11th place with 257 assists.

Right Wing - Petri Skriko Finnish forward posted four consecutive 30-goal seasons for Vancouver from 1986 to 1989 and led the team in scoring twice. Ranks 11th in franchise history with 113 even-strength goals and sixth in short-handed goals with 11. I considered Don Lever - who ranks ahead of Skriko in counting stats - but he produced fewer points per game and his -152 rating was far worse than Petri's plus/minus of -93.

A five-time finalist for the Selke trophy, Ryan Kesler won the award with Vancouver in 2011 after scoring a career-high 41 goals. He ranks 12th on the team's all-time list for games played and scored the same amount of points for the Canucks as Brendan Morrison - in 112 more games. Andre Boudrias was the Canucks' first scoring star, leading the expansion squad with 66 points in 1970-71. He posted three straight 70-point seasons from 1973 to 1975 and ranks ninth in Vancouver annals with 267 assists.

Alexander Edler - Mattias Ohlund
A stalwart on Vancouver's blueline, Alexander Edler is in his 15th season with the team. He's poised to pass countryman Markus Naslund for fifth on the Canucks' games played list and Don Lever for tenth on the team's point-scoring list in the near future. Edler is second to Harold Snepsts with 42.2 defensive point shares and his 72.1 total point shares are sixth among all Canucks players. Mattias Ohlund ranks third in defensive point shares with 39 and his 325 points are second among Vancouver defensemen.

Jyrki Lumme registered just four fewer points as a Canuck than Ohlund - in nearly 200 fewer games. The Finnish blueliner posted two 50-point seasons for Vancouver but his defensive value doesn't rank in the team's top ten. Ed Jovanovski was the first overall pick in 1994 by the Florida Panthers before Vancouver acquired him in the Pavel Bure deal. I considered him for Florida's all-time team but his points per game and point shares totals were roughly twice as high in his seven seasons with the Canucks as his first seven in south Florida.

Dennis Kearns - Harold Snepsts
Dennis Kearns scored just 31 goals in his ten season with the Canucks, and his -155 rating ranks dead last in franchise history. While I don't dismiss plus/minus outright I certainly won't hold Vancouver's lack of success in the 1970s against Kearns, whose 290 assists are eighth in franchise history. Snepsts ranks fourth in Canucks' annals with 1,146 penalty minutes and eighth in games played with 781. The 17-year veteran was an NHL All-Star in 1977 and 1982.

Sami Salo ranks fouth among Vancouver blueliners with 31.6 defensive point shares and his +78 rating is tied for fourth among all Canucks. His 48 power play goals are 13th in team history, and his 20 game-winning tallies are tied for 12th. Kevin Bieksa and Doug Lidster were also considered.

Originally a Devils draft pick, Kirk McLean leads all Canucks goalies in games played, minutes played, and saves. A two-time Vezina trophy finalist, McLean played every minute of Vancouver's 24 playoff games in 1994. "King" Richard Brodeur (no relation to Martin) is third among Canuck netminders in games played, wins, and point shares. His .918 save percentage in the 1982 playoff led the league and helped Vancouver reach the Stanley Cup final. Roberto Luongo leads the team in several goaltending categories, but the third netminder to carry Vancouver to a conference title was named the starting goalie of Florida's all-time team. 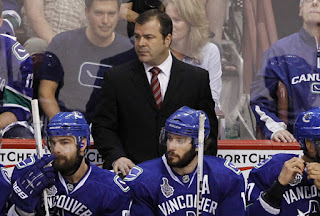 Alain Vigneault and Marc Crawford both coached the Canucks for seven seasons, but Vigneault was victorious 67 more times. The bench boss of the 2011 Western Conference champions has the highest regular-season winning percentage and the most playoff wins of any head coach in franchise history.

Both Stan Smyl and Henrik Sedin served eight seasons as captain of the Canucks, and since Sedin's captaincy didn't span the 2004-05 NHL lockout there's no real way to break the tie. Therefore I'll name them the first (and only) co-captains in this series.

I hope you'll join us tomorrow for our next All-Time Team, the Washington Capitals.