We're staying in the tri-state area for a couple more days. Today's franchise was the only U.S.-based team to win the Stanley Cup in the 1980s. Here's the all-time roster for the New York Islanders:

The Islanders won four straight Stanley Cups from 1980 to 1983, ending - and then tying - Montreal's second-longest streak of successive championships in NHL history. In 2020 the Islanders reached the Eastern Conference final for the first time since 1993, losing a six-game series to the eventual champion Tampa Bay Lightning.

Left Wing - Clark Gillies The fourth overall pick in the 1974 draft, Clark Gillies played the fourth-most games in Islanders history. He ranks fourth in Isles' annals in several categories including goals, assists, points, plus/minus, and power play goals. A four-time Stanley Cup champion, Gillies was elected to the Hall of Fame in 2002.

Center - Bryan Trottier New York's all-time leading scorer with 1,353 points, Bryan Trottier also leads the Islanders in games played, assists, and plus/minus. Trottier earned the Hart trophy as league MVP in 1979 after leading the NHL with 87 assists, 134 points, and a +76 rating. The Hall of Famer won the Conn Smythe trophy a year later, after leading the Islanders to the first of four consecutive Stanley Cup titles. He won two more Cups with Pittsburgh in 1991 and 1992.
Right Wing - Mike Bossy The NHL's all-time leader in goals per game, Mike Bossy is first among Islanders (and 22nd all time) with 573 goals. The Hall of Famer leads Long Island's team in even strength goals, power play goals, and game-winning goals, and only Trottier has more points as an Islander than Bossy's 1,126. Chronic back and knee injuries forced Bossy to retire in 1988 at age 30. Had he been able to stay healthy into the early 1990s it's possible that he could have tallied 1,000 career goals.

Left Wing - John Tonelli A stellar two-way forward for eight Islanders seasons, John Tonelli is fifth in franchise history with a +215 plus/minus rating, sixth in team history with 338 assists, and eighth with 544 points for the Isles. His 0.92 points per game average is ninth in franchise annals. Tonelli was a key member of all four championship teams from 1980-1983 and played in a fifth Cup final for the Calgary Flames in 1986.

Center - John Tavares The first overall pick in the 2009 draft, John Tavares played nine seasons in Long Island (and Brooklyn) before signing as a free agent with his boyhood team in Toronto. Tavares is seventh in Isles' annals with 272 goals, fifth in assists with 349, and fifth in points with 621. Only three players in franchise history scored more game-winning goals than Tavares' 42. His 73.5 point shares for the team are fifth among all Islanders and first among players who weren't part of the early '80s dynasty.

Right Wing - Bob Nystrom Swedish power forward played 900 games for New York, the third-highest total in Islanders history. Ranks fourth in team annals with 208 even-strength goals and fifth in penalty minutes with 1,248. Scored the series-clinching goal in the 1980 Stanley Cup final against the Flyers and contributed to all four Cup-winning Islanders teams.

Left Wing - Derek King New York's first-round pick in 1985, Derek King is seventh in Islanders history with 81 power play goals and ranks tenth in total goals with 211. From 1992 to 1994 King averaged 36 goals and 39 assists per season. He ranks ninth in franchise annals with 32.9 offensive point shares and eleventh with 499 points for the Isles.

Center - Pat LaFontaine Hall of Famer Pat LaFontaine is tied for fifth in Islanders history with 287 goals and his 0.54 goals per game average ranks third in franchise annals. LaFontaine scored over 40 goals in six consecutive seasons and finished third in MVP voting after posting a career-high 148 points for Buffalo in 1992-93. It's tough for me to put him behind Tavares on the third line, but his points were produced largely in an offense-friendly era and/or in western New York with the Sabres.

Right Wing - Billy Harris An original Islander, Billy Harris led the first-year expansion team in points as a 21 year-old in 1972-73. The first overall pick in the 1972 draft is 12th in team history with 184 goals. Harris posted four consecutive 60+ point seasons for the ascendant Islanders in the 1970s before being shipped to the Kings in a 1980 trade that brought Butch Goring to Long Island.

Center - Brent Sutter The leading scorer of the six Sutter brothers (and five sons) in the NHL, Brent was the Islanders' first-round pick in 1980. In 12 seasons with New York Sutter scored 287 goals, tied with LaFontaine for the fifth-highest total in team history. The two-time Stanley Cup champion ranks sixth in team annals with 610 points and his 49.3 point shares score is tied for ninth among all Isles with Rick DiPietro. He served as team captain for four-plus seasons until a 1991 trade sent him to Chicago.

Right Wing - Pat Flatley Sutter's successor as captain of the Islanders, Patrick Flatley played 13 seasons for the franchise. The Isles' first round pick in 1982, "Flats" is eighth in franchise annals with 712 games played, and his 328 assists are the seventh-highest total in team history.

All of those early '80s stars forced two of the Islanders' top current stars to the press box. Josh Bailey has played his entire 13-year career with the team that drafted him 9th overall in 2008. He'll soon pass Clark Gillies for fourth on the team's all-time list for games played and could pass Sutter for eighth on the Isles' assists list by the time you read this. Lee, the team's current captain, set a career high with 40 goals in 2017-18. He's already earned more point shares than Frans Nielsen and Kyle Okposo in fewer games for the Islanders.

Denis Potvin was the first overall pick in the 1973 draft. A point-a-game player over his 15-year Hall of Fame career, the three-time Norris trophy winner ranks second in Islanders' annals in games played and assists, and third in team history with 1,052 points. His 79.3 defensive point shares are twice the total of second-place Stefan Persson, who ranks seventh among all Islanders with 57.2 total point shares. The Swedish defender was a 14th-round selection in 1974 and ranks second to Potvin among Long Island blueliners in several categories including assists and points.

This pair of unrelated Swedish defensemen named Jonsson rank seventh and eighth in Islanders' annals in defensive point shares. However many of the team's top stay-at-home blueliners didn't score as many points as Tomas, who ranks sixth among all Islanders with 127 power play assists and third among Islander blueliners in assists and points. Kenny wasn't quite as proficient with the puck but he posted seven straight 25-point seasons before returning to his homeland during the 2004-05 NHL lockout.

Dave Lewis is third among Islanders defenders with a 36.5 DPS score. He ranks eighth among all Isles with a +146 rating, just ahead of the next two players on this roster. Hart is tenth on the team's all-time list with a +132 rating and tenth in penalty minutes with 783. His 34.5 DPS score is tied for fourth-best in Islanders' annals. Neither player provided much value offensively, which really tempted me to add Nick Leddy to this roster. Perhaps I'll revisit this in a year or two.

Ken Morrow is tied with Hart for fourth among Islanders with 34.5 defensive point shares and ranks ninth in team history with a plus/minus rating of +142. Though he provided little offense (just 105 points in 550 games) I couldn't bring myself to drop him from the roster completely. The four-time Cup champion famously won an Olympic gold medal and a Stanley Cup in the same season.

If you followed my baseball All-Time Teams series, you might remember my refrain "Look at the numbers then the names." By that logic Chico Resch should be the Islanders' starting goalie. His franchise-best 2.56 goals against average was far superior to Smith's 3.16. His 25 shutouts bests Billy's 22 - and Chico played nearly 400 fewer games for the Islanders. Resch is third in team history with a .911 save percentage; Smith ranks outside the top ten with his .895 percentage. Resch won just one Cup with the team before a 1981 trade to Colorado while Smith started in goal for all four Islander Cup wins. I'll trust Al Arbour's judgment and let Smith keep his job - but I'm naming Chico the first "1A" of this series. 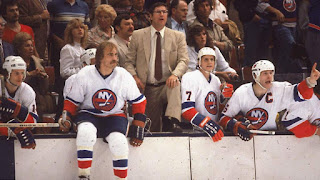 Al Arbour coached the Islanders from 1973 to 1994, earning 739 regular season wins, 119 postseason wins, and four Stanley Cup titles. He ended his tenure with 1,499 games coached - until Ted Nolan, who coached the club from 2006-08, inquired about having him return to round off that number to 1,500. Early in the 2007-08 season Arbour returned to coach game #1500 at age 75 - making him the oldest coach in NHL history. The Islanders won, earning their Hall of Fame head coach victory #740.

I hope you'll join us tomorrow for our next All-Time Team, the New York Rangers.