Today we'll look at the franchise with the longest active streak of non-playoff seasons. Here's the All-Time Roster for the Buffalo Sabres:

The Sabres lost the 1975 Stanley Cup Final to the "Broad Street Bullies" from Philadelphia. They lost the 1999 final in a controversial Game 6 against the the Dallas Stars.

Right Wing - Alexander Mogilny Trailblazing Russian star played just six seasons in Buffalo and does not rank in the team's top ten in any major category. However, he's third in Sabres history with 0.55 goals per game and second with 1.17 points per game.

Center - Jack Eichel The second overall pick in the 2015 draft, Eichel has already cracked the Sabres' all-time top 20 in goals and points. He's scored 24 or more goals in each of his five seasons with the Sabres and set a career high with 36 markers in the Covid-shortened 2019-20 season. Eichel won the Hobey Baker award as College hockey's top player in his Freshman season.

Right Wing - Danny Gare The NHL's leading goal-scorer in 1979-80, Gare ranks fourth in Sabres history with 267 tallies. His +187 rating for the team is fifth in franchise history, and his 500 total points (in 503 games) for Buffalo rank tenth in team annals.

Left Wing - Craig Ramsay Only Gilbert Perreault suited up for the Sabres more than Ramsay, who played all 1,070 of his career games for the franchise. He ranks third in team history with 420 assists and fourth with 672 total points. A three-time runner-up for the Selke trophy as the NHL's best defensive forward, Ramsay finally won the award in his last NHL season of 1984-85.

The Sabres are incredibly deep at right wing. I would have liked to include Rob Ray (who ranks sixth in NHL history with 3,207 penalty minutes) but I couldn't justify adding him over Satan or Foligno. The former is eighth among Sabres with 224 goals (and fifth in era-adjusted goals) while the latter tallied the ninth-most points and the second-most penalty minutes in team history. Taro Tsujimoto just missed the cut.

Hall of Famer Phil Housley ranks second in NHL history among American-born players with 1,232 career points. His 558 points while with Buffalo rank fifth in team annals. Hajt is first in Sabres history with 64.8 Defensive Point Shares, second in plus/minus, and fifth in games played.

Korab posted five consecutive seasons of over 40 points from 1975 to 1979. He ranks tenth in team history with 870 penalty minutes and his 33.3 career DPS is tied for seventh among Sabres. Schoenfeld, the youngest captain in Sabres history until Jack Eichel earned the 'C', ranks third in franchise annals with a 45.5 DPS and seventh with 1,025 penalty minutes. His +60 rating led the NHL in 1979-80.

Bodger ranks fourth among Sabres defensemen with 287 points in 479 games. Ramsey, a member of the 1980 U.S. Olympic hockey team, ranks sixth among all Sabres with a +166 rating and second with a Defensive Point Shares rating of 58.2. His 911 games with the franchise are third all-time behind Gilbert Perreault and Craig Ramsay.

Alexei Zhitnik is ninth in Sabres history with 712 games played and fourth in DPS with 36. Lindy Ruff had a strong case to make this team as a player, but there are enough quality options to let him focus on coaching. I also considered Larry (doesn't) Playfair, who has the same amount of DPS as Jerry Korab and ranks third on the Sabres' all-time list with 1,392 penalty minutes.

"The Dominator" is on the short list of greatest goaltenders in NHL history. Hasek won six Vezina trophies, three Jennings trophies, and two Hart trophies as league MVP - a rare feat for a goaltender. His save percentage, goals against average, and shutout totals are tops in team history. Miller, the winningest American-born goalie in NHL history, played more games and earned more wins than any Sabres goalie. He's two victories away from tying Hasek for 14th on the NHL's all-time list. 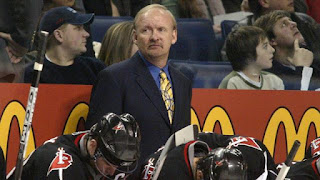 The new bench boss of the Devils, Lindy Ruff coached twice as many seasons and nearly three times more games for Buffalo than the second-most accomplished coach in Sabres history, Scotty Bowman. Bowman has been named head coach of an original six franchise's All-Time Team.

I hope you'll join us tomorrow for our next All-Time Team, the Calgary Flames.