Let's. Play. Hockey! Today's team is celebrating their 20th season in the NHL. Here's the all-time roster for the Minnesota Wild: 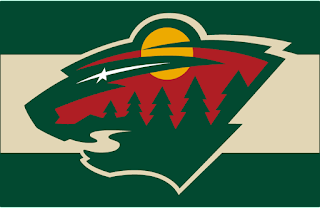 The Wild reached the Western Conference final in 2003, their third year of existence. They have reached the postseason nine more times but have failed to advance beyond the second round.

Left Wing - Zach Parise Born and raised in the Twin Cities, (where his dad J.P. played for the North Stars) Zach Parise returned home after signing a 13-year contract with the Wild in 2012. In the eight seasons since signing that megadeal, Parise has tallied the third-most goals and the third-most points in Wild history. The six-time 30-goal scorer had better numbers (and better health) in New Jersey, where he lit the lamp two more times in two fewer seasons. However this offense-starved roster is a better fit for him.

Center - Mikko Koivu The sixth overall pick in 2001, Mikko Koivu is the Wild's franchise leader in games played, assists, points, and plus/minus. Minnesota named Mikko their first full-time captain in 2009 and he wore the 'C' until 2020, when he signed a one-year contract with the Columbus Blue Jackets. He ranks in the team's top three in power play goals, short-handed goals, and game-winning goals.

Right Wing - Marian Gaborik Minnesota's first ever draft pick (and third overall) in 2000, Gaborik is the Wild's career leader in goals, even strength goals, and game winning goals. A three-time 40-goal scorer, "Gabby" holds the team's single-season record with 83 points in 2007-08 and shares the single-season goals mark with Eric Staal at 42 apiece. The three-time All-Star won a Stanley Cup with the Kings in 2014.

Left Wing - Andrew Brunette Minnesota's fifth-leading goal scorer and sixth-leading point producer, Andrew Brunette played for three expansion teams in four years. A member of the Predators' inaugural squad, Nashville traded him to Atlanta, where he suited up for the Thrashers' first two seasons before joining the Wild in 2001 for their second campaign. His 18.1 shooting percentage with the Wild is the highest in franchise history.

Center - Mikael Granlund Another Finnish center the Wild drafted in the top ten, Mikael Granlund was the 9th overall pick in 2010. His 317 points for the franchise are seventh in team annals, and only three Wild players have more assists than Mikael's 224. He posted back-to-back seasons of over 20 goals and 65 points in 2017 and 2018.

Right Wing - Nino Niederreiter The NHL's all-time leading goal scorer among Swiss-born players, Nino Niederreiter was drafted fifth overall by the Islanders in 2010. In his six seasons with the Wild, Nino compiled the seventh-highest goal total (110) and the sixth-highest plus/minus (+43) of any player in team history.  He was traded to Carolina in 2019.

Left Wing - Jason Zucker Currently a Pittsburgh Penguin, Jason Zucker spent his first nine seasons in the Twin Cities, registering the ninth-most points in Wild history. The 2019 King Clancy honoree led the NHL in plus/minus with a +34 rating in 2016-17 and set career highs with 33 goals and 64 points a season later. His 132 goals for Minnesota are fourth in franchise history behind only Gaborik, Koivu, and Parise.

Center - Charlie Coyle A versatile forward who has lined up at center and right wing, Charlie Coyle now plays for his hometown Boston Bruins. In seven seasons and 479 games with the Wild, Coyle totaled 151 assists (ninth in team history) and 242 points (tenth in team annals). His 20 game-winning goals for the Wild are one ahead of the next player on this line for seventh in team history.

Right Wing - Pierre-Marc Bouchard The eighth overall pick in the 2002 draft, Bouchard ranks eighth in Wild history with 106 goals. His 347 points for the franchise are the fifth-most and only two Wild players have tallied more assists than PMB's 241. Hockey-reference lists Pierre-Marc as a center only, though he played some right wing in his career. He and Charlie Coyle can switch places if preferred.

Left Wing - Pascal Dupuis An undrafted free agent, Dupuis had greater success in Pittsburgh, where he played in two Stanley Cup finals and posted two 20-goal seasons. Minnesota's forward pool gets awfully shallow here (and Brian Rolston isn't eligible) so his 141 points in 334 games for the Wild are enough to earn a spot on the checking line.

Center - Wes Walz A journeyman who found a home with the Wild after five seasons in Switzerland, Wes Walz was a Selke finalist and two-way star for the team in 2003. After posting just 32 points in 80 regular season games that season, Walz tallied 13 points in 18 playoff games. He's one of only 19 players in franchise history to record 100 or more assists.

Right Wing - Cal Clutterbuck A relentless bodychecker, Cal Clutterbuck led the NHL in hits three straight seasons from 2009-2011. In his six years with the Wild, Cal served 337 penalty minutes - the fourth-highest total in team history. He shared the league lead with four short-handed goals in 2011-12.

Brodziak is ninth among Minnesota forwards with 446 games played for the franchise. He and Laaksonen have the most goals for the Wild of all remaining forwards. Jim Dowd scored three more points than Laaksonen in 40 fewer games. However I'm pro-Antti because he had a higher point shares rating than "Jersey Jim" and because I avoid selecting players with less than 300 games played whenever possible.

Ryan Suter received the same 13-year contract as his friend Zach Parise and has provided far more value for the Wild since signing with the team in 2012. The franchise leader in defensive point shares, Suter is second among all Wild players with 299 assists, third in plus/minus with a +53 rating and third with a total point shares score of 64.3. Spurgeon succeeds Mikko Koivu as Minnesota's captain entering his 11th season with the team. The eighth-leading point scorer in franchise history trails only two players in games played and DPS for the Wild.

Matt Dumba was Minnesota's first pick (seventh overall) in 2012. The 2020 King Clancy award winner for leadership set career highs with 14 goals and 50 points in 2017-18. His 174 career points are fourth among defensemen (and 17th overall) in franchise history. Brodin has suited up for the Wild 555 times heading into 2021, the sixth-most appearances for Minnesota. His +47 rating is fifth in franchise annals, and only three blueliners have a higher defensive point shares total for the Wild.

Kuba quarterbacked the Wild power play for their first five seasons, earning 52 of his 132 points with a man advantage. He ranks fifth among Minnesota defensemen with 21.2 defensive point shares. Schultz is second to Suter in DPS with a career score of 39.2 and only Mikko Koivu played more games for Minnesota.

Now a member of the Blues, Marco Scandella is seventh among Minnesota defensmen with 373 games played and  ninth among all blueliners in franchise history with 89 points. Two players ahead of him are on other all-time teams. Willie Mitchell was considered but he didn't provide any offensive value.

My instinct was to name Niklas Backstrom the starter in net, as he holds franchise records for point shares, games/minutes played, wins, and shutouts. However Dubnyk has a better goals against average, a better save percentage, and isn't far behind Backstrom in wins or shutouts. This is a tough one but I'm going with Dubnyk, the 2015 Masterton award winner over Backstrom, who led the NHL in goals against average as a rookie in 2006-07. 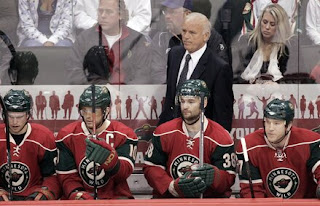 The Wild have had just four coaches with a tenure of more than 27 games, and Jacques Lemaire leads the franchise in games coached and wins. The bench boss of Minnesota's most successful squad in 2002-03, Lemaire will make an appearance on two of the next three All-Time rosters.

I hope you'll join us tomorrow for our next All-Time Team, the Montreal Canadiens.