Hello, Hockeytown! Today's team has the most Stanley Cup victories of any U.S. based NHL franchise. Here's the All-Time roster for the Detroit Red Wings:

Detroit has captured the Cup eleven times, most recently in 2008 when they defeated the Pittsburgh Penguins. The Red Wings lost the rematch in the 2009 final.

Left Wing - Ted Lindsay Prototypical power forward starred on Detroit's "Production Line" in the 1940s and '50s. Led the NHL with 55 assists and 78 points (in 69 games) in 1949-50. Won four Stanley Cups with the Wings in a six-year stretch from 1950 to 1955. The award for league MVP as voted on by the NHL players was renamed in his honor for his contributions to the union.

Center - Steve Yzerman Detoit's captain for 19 years and current General Manager, "Stevie Y" is the Red Wings' career leader in assists with 1,063. The Pearson(now Lindsay) award winner in 1989 ranks tenth in NHL history with 692 goals, ninth all-time in assists, and seventh in NHL annals 1,755 total points - all with the Wings. He would hold many more team records if not for the next legend on this line.

Right Wing - Gordie Howe Perhaps the greatest all-around hockey player in history, Gordie Howe's professional career spanned five decades (technically more) from the six-team NHL of the 1940s to the expanded 21-team league after the WHA merger. "Mr. Hockey" remains the NHL's all-time leader in games played with 1,767, and his combined total of 975 goals is unmatched in the sport. The 21-time All-Star was named MVP of his league seven times, led the NHL in scoring six times, and won four Stanley Cups.

Left Wing - Henrik Zetterberg Swedish star (and Jake Gyllenhaal doppelgänger) set career highs in goals and points in 2007-08, finishing the year with a Stanley Cup victory and a Conn Smythe trophy as playoff MVP. Zetterberg's goals, assists, and points totals rank fifth in franchise history, and only five players have worn the winged wheel more than Detroit's seventh-round selection in the 1999 draft.

Center - Sergei Fedorov Detroit's fourth-leading sniper with an even 400 career goals, Sergei Fedorov excelled at both ends of the ice throughout his Hall of Fame career. The two-time Selke winner and three-time Stanley Cup champion won the Hart trophy as NHL MVP in 1994. Carolina helped end Fedorov's contract dispute in 1997-98, signing him to a record offer sheet that the Red Wings matched. Only one Russian-born NHLer has more career goals and points and none of his countrymen have more assists (yet) than Sergei.

Right Wing - Brendan Shanahan The third 600-goal scorer on the Wings' All Time team, Shanahan scored 656 goals for five teams in his Hall of Fame career. His 309 markers for Detroit are ninth in franchise history and only five Red Wings have scored more power play goals. Other than Howe, no natural right wing ranks in the Red Wings' top 25 in scoring so you will see multiple left wings lined up out of position on this roster.

Left Wing - Alex Delvecchio A model of consistency and durability for Detroit, Alex Delvecchio rarely missed a game from 1951 to 1973. The three-time Lady Byng trophy recipient and three-time Stanley Cup winner is number three on the Red Wings' all-time list for games played, goals, even strength goals, and points. Primarily a center, hockey-reference lists the Hall of Fame forward as a C/LW so we'll move him over to the left side for this roster.
Center - Pavel Datsyuk Similar to Sergei Fedorov, Datsyuk is another Russian center who won multiple Stanley Cups and Selke trophies with the Red Wings. Both players racked up 900+ points and 82 offensive point shares in the Motor City and Datsyuk's era-adjusted production was slightly higher. However Fedorov's points per game average was higher and Datsyuk was better defensively. The future Hall of Famer won four consecutive Lady Byng trophies and led the NHL in plus/minus in 2007-08.

Right Wing - John Ogrodnick Four time 40-goal scorer set a career high with 55 goals and 105 points in 1984-85, earning him first team all-NHL honors. 265 of Ogrodnick's 402 career goals were scored for the Red Wings, placing him tenth in team history. Produced at nearly a point-a-game clip in Detroit, resulting in the franchise's eighth-highest PPG average. He's another natural left wing I'm forced to move to the right side for this roster.

Left Wing - Tomas Holmstrom Another late-round gem GM Ken Holland imported from Sweden, Tomas Holmstrom was a strong net-front presence for the Wings over fifteen seasons. The four-time 20-goal scorer and four-time Stanley Cup champion is fourth in franchise history with 122 power play goals. "Homer" is seventh all-time among Red Wings with 1,026 games played and only four players in his 1994 draft class played more NHL games than the 257th player selected that year.

Center - Norm Ullman The fourth of five Hall of Fame centers on this roster, Norm Ullman ranks seventh in Red Wings' annals with 324 goals and eighth in assists (434) and points (758). He led all postseason point scorers in 1963 and 1966, though Detroit lost the Stanley Cup final in both those seasons. You'd be hard pressed to find another fourth-liner on these all-time teams with as many career points as Ullman's 1,229 - the 42nd highest total in NHL history.

Right Wing - Mickey Redmond As I mentioned there are no natural right wings (aside from "Mr. Hockey") among Detroit's all-time top 25 scorers. Mickey Redmond barely cracks the team's top 30, placing 29th with 309 points in 317 games. His 177 goals are 20th in team history, and his 0.97 points per game average is tied for ninth-best with Ray Sheppard, another right wing who played even fewer games for the franchise.

Hall of Famer Sid Abel was the center of Detroit's "Production Line." The 1949 NHL MVP and goal-scoring leader is also listed as a left wing. Kris Draper is sixth in Red Wings history with 1,137 games played over 17 seasons. The four-time Stanley Cup champion won the Selke trophy for defensive excellence in 2004. This roster really doesn't need six centers but the only other option to consider is Syd Howe (no relation to Gordie), another Hall of Fame C/LW who played 515 games for the Wings from 1934 to 1946. It's a tough call but I suppose we'll trust the history books and select the Sids.

Nicklas Lidstrom - Red Kelly
One of the top five defensemen in NHL history, Nicklas Lidstrom is the Red Wings' all-time leader in plus/minus and defensive point shares, and second to Howe in games played and total point shares. The seven-time Norris trophy winner and four-time Stanley Cup champion is sixth all-time among NHL defensemen with 1,142 career points and sixth all-time among all NHL players with 211.77 point shares. Kelly was a key member of eight Stanley Cup winning clubs in Detroit and Toronto. The Hall of Fame rearguard won three of his four Lady Byng trophies and a Norris trophy in a four year span from 1951 to 1954.

Pronovost won five Stanley Cups with the Red Wings and has the second-highest defensive points shares rating in team history. The Hall of Famer was a Norris trophy finalist three times but never quite scored enough points to win the award (what's that? the award is supposed to be for defense?)  His brother Jean Pronovost is on another All-Time team. Konstantinov, a member of the famed "Russian Five", led the league in plus/minus with a +60 rating in 1995-96. In just six seasons he posted a higher career plus/minus for the Red Wings than Steve Yzerman. Vlad's career was abruptly ended when a limousine accident left him paralyzed shortly after the Wings' 1997 Stanley Cup victory.

Niklas Kronwall - Reed Larson
If the "Swedish Five" was a thing, Niklas Kronwall would be part of it. A breakout star of Detroit's Cup-winning 2008 squad, Kronwall is tied with Pavel Datsyuk for ninth on the team's games played list and his defensive point shares score is fourth-highest in franchise annals. He set career highs with 45 assists and 51 points in 2008-09. Larson was an exceptional offensive defenseman, posting 60 points or more in nine out of ten seasons from 1978 to 1986. One of the lone bright spots during Detroit's lean years, Larson's -139 plus/minus is the second lowest in team history. He played in just 14 playoff games over his decade with the Wings.

Hall of Famer Ebbie Goodfellow is the fifth-highest scoring defenseman in Red Wings history - though to be fair he lined up at center for his first three NHL seasons. Only nine players stayed with the franchise longer than Goodfellow's 14 Detroit seasons. The 1940 NHL MVP gets the nod here over fellow Hall of Famer Jack Stewart and Gary Bergman, who posted half a point share more than Ebbie - in 150 more games.

Hall of Famer Terry Sawchuk won three Stanley Cups, three Vezina trophies, and the Calder trophy in his first five seasons as the Red Wings' starter. He retired in 1970 as the winningest netminder in NHL history with 445 regular-season wins. Chris Osgood is right behind him on the Wings' wins list with 317 victories (to Sawchuk's 350) and way behind him for second in shutouts with 39 (to Sawchuk's 85). Osgood won three Stanley Cups, two Jennings trophies, and could have married Kristen Bell. 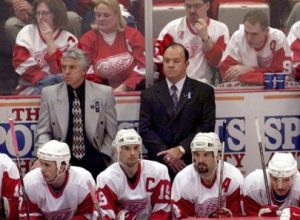 As I have mentioned, players can only represent one team. However coaches can be named to multiple clubs. Scotty Bowman, the NHL's all-time leader in wins, winning percentage, and Stanley Cup titles, has a case for coaching three All-Time teams. Jack Adams and Mike Babcock won more games as Detroit's bench boss but Bowman brought this franchise back to the pinnacle of the sport after over 40 years without a Cup.

I hope you'll join us tomorrow for our next All-Time Team, the Edmonton Oilers.