It's opening night of the 2021 NHL season, and I'm sure you'll all be watching the games so this post will be a bit less wordy than the rest of the series. Here's the All-Time roster for the Florida Panthers:

The Panthers reached the Stanley Cup final in their third year of existence. They were swept by the Colorado Avalanche in the summer of 1996 and haven't won a playoff series since.

Left Wing - Jonathan Huberdeau Third overall pick in 2011 is first in Florida history with 289 assists and 437 points. Won the Calder trophy in 2013 and set a career high with 92 points in 2018-19.
Center - Aleksander Barkov Underrated for years, Aleksander Barkov won the Lady Byng trophy and set the Panthers franchise record for points in a season with 96 in 2018-19. The Cats' current captain has the third-most goals and the second-most assists among Panther players. He was the second overall pick in the 2013 NHL draft.
Right Wing - Nathan Horton Third overall pick in the 2003 draft is seventh in Panthers' annals with 142 goals and sixth with 295 points. His 14.8 shooting percentage is tied for second-best in franchise history with Pavel Bure (who technically qualifies for Florida, but...)

Left Wing - Viktor Kozlov Set career high with 70 points while centering Pavel Bure's line in 1999-00. Ranks seventh in career assists and points among Panthers players. Played left wing early in his career, and Florida has enough solid centers to move him back to his original position.
Center - Olli Jokinen Four-time 30+ goal-scorer for Florida in the 2000s, Jokinen is the franchise record-holder with 188 career markers. He's first in Panthers' annals with 36 game-winning goals and second to Huberdeau in points with 419. Served as Cats' captain from 2003 to 2008.

Right Wing - Scott Mellanby Inventor of the "Rat Trick", Scott Mellanby was the driving force of the Panthers' run to the final in 1996. The second captain in team history, Mellanby is second to Jokinen in goals for Florida with 157. He scored 364 total goals in his 21-year NHL career.

Left Wing - Vincent Trocheck Currently on Carolina, Trocheck ranks ninth on the Panthers' all-time list in career goals, assists, points, and even-strength goals. He set career highs with 31 goals and 75 points in 2017-18.
Center - Stephen Weiss Florida's career leader in games played with 654, Weiss was the fourth overall pick in the 2001 draft. He's third on the franchise's all-time assists list with 249 and ranks third among all Panthers in points and power play goals.
Right Wing - Radek Dvorak Czech winger just barely cracks the Panthers' top ten in total points with 268 - two more than Rob Niedermayer. His 155 assists for the franchise are ten behind Niedermayer for tenth in team annals. Only Stephen Weiss played more home games in south Florida than Dvorak.

Left Wing - Bill Lindsay Gritty winger is tenth in team history with 506 games played for Florida, fifth in penalty minutes, and tied with Jokinen for the fourth-most short-handed goals in Panthers history. Scored one of the most memorable goals in Panthers history, clinching their first-round win against the Bruins in 1996 with this highlight-reel shot.

Center - Rob Niedermayer Fifth overall pick in 1993 and first draft choice in Panthers history, Rob Niedermayer set career highs with 26 goals and 61 points for the Eastern Conference champs in 1996. He ranks in the team's top ten in games played, goals, assists, game-winning goals, and power play goals. Won a Stanley Cup with his brother Scott as a member of the Ducks in 2007.

Right Wing - Tom Fitzgerald Like his All-Time linemates, Tom Fitzgerald was a member of the original Panthers lineup in 1993-94 and the Stanley Cup finalists in '96. Only Radek Dvorak scored more short-handed goals than Tom's 12. The 17-year veteran is now General Manager of the New Jersey Devils.

One of just thirteen forwards with 100 career assists for the Panthers, Nick Bjugstad played one more season and 85 more games than David Booth, who matched his total of 87 goals for the team. Peter Worrell is second on the Panthers' all-time list with 1,375 penalty minutes in just 342 games for Florida. I don't often get to fit an enforcer on these rosters but the Panthers' lack of left wing depth justifies it here.

Svehla leads all Florida defensemen with 229 assists, 290 points, and 28.3 defensive point shares. His 49.5 total point shares for the Panthers is the highest among non-goalies in franchise annals. Ekblad was the first overall pick in the 2014 draft. He's second to Svehla in DPS, fifth in Florida history with a career plus/minus of +29, and fifth among non-goalies with a point shares total of 40.9. The 2015 Calder trophy winner set career highs with 36 assists and 41 points in 2019-20.

The Panthers traded down from the #1 selection in the 2002 draft to take Bouwmeester third overall. A veteran of 17 NHL seasons including six in south Florida, Bouwmeester retired from the NHL earlier this week. He's third in Panthers' annals with 21.8 defensive point shares and posted three season of 40+ points for Florida. Campbell, the first defenseman to win the Lady Byng trophy since 1954, holds the Cats' single-season plus/minus record with a +31 in 2015-16. He racked up 175 points over five seasons for the Panthers.

Gord Murphy - Dmitry Kulikov
Gord Murphy led all Panthers blueliners in points over the team's first two seasons. His DPS rating of 20.6 is fifth in Florida franchise history. Kulikov is one of just three defenseman to play seven years and 400 games for the Panthers - and one of only ten Cats with 100 points and 300 penalty minutes for the team. Tom Fitzgerald signed the Russian rearguard to the Devils in October.

Paul Laus (pronounced Laws) played his entire nine year NHL career with the Panthers after they claimed him from Pittsburgh in the expansion draft. Florida's all-time leader in penalty minutes with 1,702 in 530 games (eighth in team history), Laus has the fourth-highest plus/minus rating in franchise annals. I considered Ed Jovanovski for this group, but he had better years elsewhere.

The greatest player in franchise history, Roberto Luongo leads all Panthers with 124.1 point shares - more than twice as many as the second-place Panther. The team leader in wins and shutouts, Luongo played 572 games for Florida, twice as many as any other goalie and more than all but three skaters in team history. "Beezer" was the first player taken in the 1993 expansion draft and led Florida to the Stanley Cup final three years later. He's second among Panthers goalies in games played, wins, and goals against average. 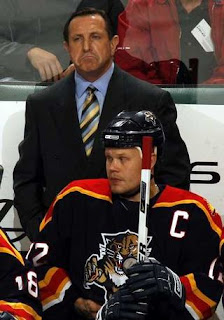 No head coach has stayed in south Florida longer than three seasons. Jacques Martin is tied with Peter DeBoer in games coached and had a slightly higher winning percentage. Though he couldn't get the Cats to the playoffs I'm going with him over Doug MacLean, the bench boss of the 1996 Panthers. MacLean is fourth in franchise history with 83 wins and a .532 winning percentage.

Jokinen and Scott Mellanby served four seasons each as captain (as did Brian Skrudland, who didn't make this roster). I gave Olli the 'C' here because his captaincy spanned five years - including the 2004-05 lockout.

I hope you'll join us tomorrow for our next All-Time Team, the Los Angeles Kings.