Today's team is the tenth in the All-Time Teams series, which means we've reached the end of the first period. Here's the all-time roster for the Dallas Stars: 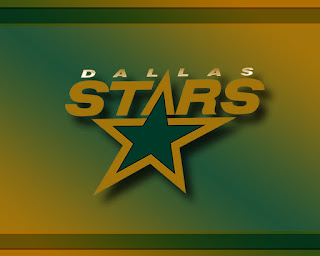 The Stars were the first southern US team to win the Stanley Cup, defeating Buffalo in the 1999 final. They were finalists four other times - twice in Minnesota and twice in Dallas, including last year's loss to the Tampa Bay Lightning.

Left Wing - Jamie Benn The Stars' captain since 2013, Jamie Benn is fourth in franchise history with an even 300 goals. 206 of those tallies occurred at even strength, the second-highest total in team history. Benn's 47 game-winning goals are also second-best among all Stars. He won the Art Ross trophy in 2015 for leading the NHL in scoring with 87 points.
Center - Mike Modano The first overall pick in the 1988 draft, Mike Modano is the North Stars/Stars career leader in most offensive categories. All but four of his 561 career goals were scored for the Stars franchise, the highest total of any American-born player. The Hall of Famer ranks 24th all time with 1,374 career points and his 1,359 for Minnesota/Dallas are nearly 500 more than the second-highest scorer in Stars history.

Center - Neal Broten Born and raised in Minnesota, Neal Broten played more games for the North Stars than anyone in team history. He ranks second in games played, assists, and points for the franchise, and his 76 assists in 1985-86 remains a Stars' single-season record. Broten won a Stanley Cup with the Devils in 1995, his third appearance in the final.

Right Wing - Bill Goldsworthy In nine full seasons with the North Stars, Bill Goldsworthy posted six consecutive 60-point seasons and five 30-goal seasons including a career-high 48 in 1973-74. His 267 career markers for Minnesota are the sixth-most in Stars history, and his jersey #8 has been retired by the team.

Left Wing - Brenden Morrow The Stars' captain from 2006 to 2013, Morrow ranks fifth in franchise history with 835 games played, fourth in penalty minutes with 1,203, and fourth in plus/minus with a +102 rating. His 528 points as a Star are the ninth-highest total in team annals.
Center - Tyler Seguin The second overall pick by Boston in 2010, Tyler Seguin was traded to Dallas after just three seasons with the Bruins. In the seven seasons since, he has piled up 514 points in 538 games for an 0.96 points per game average - the fourth highest in North Stars/Stars history. With a single point in 2021 Seguin will break a tie with the next player on this line for sole possession of tenth place on the Stars' scoring list.

Right Wing - Jere Lehtinen One of the finest defensive forwards of his era, Jere Lehtinen is the Stars' career leader in plus/minus with a +176 rating, nearly 60 points higher than Mike Modano. The three-time Selke trophy winner is tied with Morrow for eighth among Stars with 243 goals and tied with Seguin for tenth in points. He won a Stanley Cup with Dallas in 1999, leading all postseason scorers with eight even-strength goals.

Left Wing - Loui Eriksson A key piece of the Tyler Seguin trade, Eriksson spent the first seven seasons of his career in Dallas before shipping up to Boston. The two-time Lady Byng trophy finalist posted three straight seasons of 70+ points prior to the lockout-shortened 2012-13 campaign. Only one player has scored more points for the Stars in fewer games than Eriksson's 357 points in 501 contests.

On most All-Time teams a franchise's seventh-leading goal scorer would have no problem earning a starting spot. While 534 points (ninth in team history) wasn't enough for Gagner to squeeze past Seguin or Smith he's able to hold off Mike Ribeiro for the reserve center spot. Parise (whose son Zach is on another All-Time team) starred for the North Stars from 1968-1975, then returned to Minnesota for his final season in 1978-79. Per hockey-reference.com, Parise's closest comparable is Sam Gagner - Dave's son.

Zubov, a 2019 Hall of Fame inductee, is second among Stars with 106 point shares. The two-time Stanley Cup champion is third in franchise history with 438 assists and a +103 plus/minus for the franchise. He also leads all Dallas defensemen in games played, goals, points, and DPS. Hatcher is second to Sergei among Stars blueliners in games played, plus/minus, and point shares. The first American captain of a Cup winner, Hatcher is third among all Stars with 1,380 penalty minutes.

John Klingberg has nearly matched Hatcher's point total in half as many seasons. The offensive-minded blueliner posted 40 or more points and a plus rating in each of his first five seasons. He's already fourth among Stars defensemen with 233 assists in 425 games. Sydor was a valuable all-around defensemen for four Stanley Cup finalists and a two-time Cup winner. In ten seasons with the Stars, Sydor accumulated the sixth-highest plus/minus rating and the seventh-highest point shares total in franchise history.

Hartsburg piled up points for the North Stars in the 1980s, dishing out 50 assists in a season twice and 60 assists in 1981-82. The three-time All-Star is ninth in team history with 315 career helpers and his 0.55 assists per game ranks tenth in team annals. He's paired with a defense-first rearguard in Daley, who recently retired after 16 seasons in the NHL. Only eight players suited up for the Stars more than the two-time Stanley Cup champion, who sits in seventh place on the team's All-time list for defensive point shares with 34.2.

Plenty of decent defensive options in big D. Curt Giles and Richard Matvichuk both played a dozen seasons for the franchise, placing in the team's top five in DPS and posting positive plus/minus ratings. Gordie Roberts totaled more points than both of them in far fewer games for the franchise - but those stats were inflated in the high-octane '80s. Robidas ranks higher than Roberts in adjusted points and actual DPS, frequently ranked among the NHL's top ten in hits, and earned an All-Star invite in 2009.

Belfour played just five seasons in Dallas; six goalies played more games for the franchise. However Eddie "the Eagle" tops the team in goals against average, won the Jennings trophy four times, and won the third-most games of any North Stars/Stars netminder. The Hall of Famer ranks second in team annals with 27 shutouts and an era-adjusted 2.54 GAA. Turco leads the franchise in wins, shutouts, and minutes played. He led the NHL in goals against average twice in his first three seasons after taking over for Belfour in the Stars' cage. 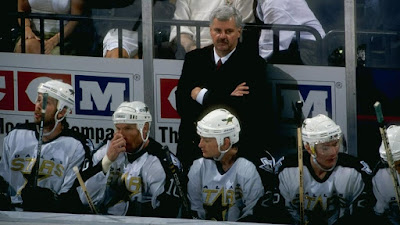 Ken Hitchcock has the third-most coaching wins in NHL history and the most in North Stars/Stars history. He led Dallas to back-to-back Finals appearances in 1999 and 2000, won the Jack Adams award with the Blues in 2012, and boasts a career winning percentage of just under .600.

I hope you'll join us tomorrow for our next All-Time Team, the Detroit Red Wings.